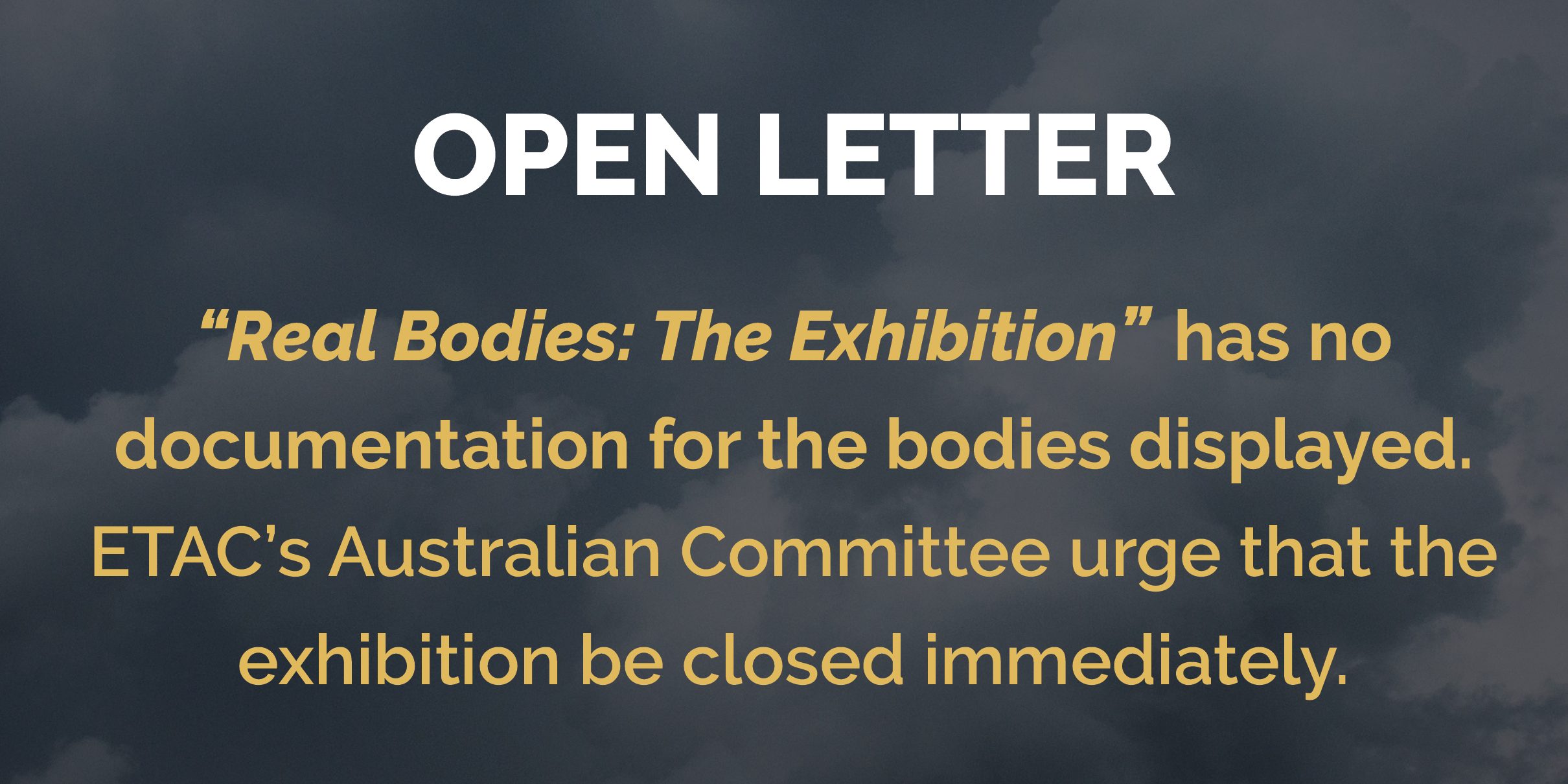 An OPEN LETTER signed by lawyers, academics, ethicists and human rights advocates urges the Australian Government to close the ‘Real Bodies’ exhibition immediately. The authors also call for a boycott by all schools, universities and other organized groups.

The Australian Committee of the International Coalition to End Transplant Abuse in China (ETAC) wish to bring to your attention our grave concerns regarding “Real Bodies-The Exhibition” currently showing at the Byron Kennedy Hall in the Entertainment Quarter at Moore Park, Sydney. We request, as a matter of urgency, that you take immediate action to close it down.

Doctors, ethicists, lawyers and human rights advocates at ETAC have substantial concerns about the provenance of the bodies used in this exhibition. Allegedly the exhibits are sourced from the unclaimed corpses of people who have died in hospital, procured by the Public Security Bureau, however it is not possible the bodies were ‘unclaimed’, as according to regulations and autopsy rules issued by China’s Ministry of Health on February 22, 1979[1], bodies can only be declared ‘unclaimed’ after 30 days. Of note, the plastination process, which involves the use of silicon, epoxy, and other polymer mixtures to replace the fluid in the human body, must occur within 48 hours of death. Therefore it is not possible to plastinate a corpse that is 30 days old (see addendum).

Rather than being sourced from unclaimed bodies, as the exhibitors claim, there is credible evidence that these are the bodies of executed prisoners and prisoners of conscience from China.[2]

Tom Zaller, CEO of Imagine Exhibitions, recently made public admissions that the bodies are “absolutely from China”. He said there is “no documentation” to prove their identities or show they had agreed in life to donate their corpses in death.[3] The bodies used in the exhibition are provided by the Dalian Medical University Biology Plantation in China.

Using human organs and tissues without consent for financial profit is the antithesis of ethical and legal practice as set out in the Declaration of Istanbul on Organ Trafficking and Transplantation and the Council of Europe Convention against Trafficking in Human Organs.[4] Further, such conduct of organ trafficking and organ tourism is a serious breach of international human rights law, and Australia should have no part in it.

Many cities and countries around the world, including Hawaii, France, Seattle and Israel[5] recently banned similar exhibitions of plastinated human beings.

We are astonished that visas and permits for bringing this exhibition into Australia were issued by the Australian Government, given the lack of documentation demonstrating ethical and legal sourcing of each body. No motivation for profit or political sensitivities could ever justify such a crass and undignified violation of human rights.

We, the undersigned, therefore ask that this exhibition be closed immediately given the lack of clarity about the origins of the preserved human beings and body parts on display.

We trust that you will treat this as a matter of urgency and look forward to your immediate response.

Senior Lecturer, Disciplines of Nursing and Midwifery, University of Canberra

Ethicist, Faculty of Medicine, The University of Queensland

We wish to clarify a statement in our letter. It may be possible to plastinate bodies that are 30 days old. However, to preserve anatomical features, academic sources state that plastination should commence within 2-10 days of death as bodies stored for longer periods undergo significant deterioration.

https://embryo.asu.edu/pages/gunther-von-hagens-plastination-technique
The process should begin between two and ten days after the body dies to ensure that the anatomical features, such as the muscle shape of the plastinate, resemble those of a living organism.
http://www.mamcjms.in/article.asp?issn=2394-7438;year=2016;volume=2;issue=1;spage=38;epage=42;aulast=Mahajan
Proper choice of the corpses is the foremost step of plastination. The corpse with shortest possible postmortem interval (2–10 days) is desirable so as to avoid the effects of the autolytic degeneration.
https://pdfs.semanticscholar.org/045e/65129819f365260a3bad87fd769326e8f716.pdf
Preferably one may choose the shortest possible postmortem interval (2 to 10 days) is desirable because of the autolytic degeneration of delicate tissues.
https://www.researchgate.net/publication/271270765_THE_ART_OF_PLASTINATED_CADAVERS

The process of plastination of whole-body slices actually starts with the proper choice of corpses. Preferably one may choose the shortest possible postmortem interval (2 to 10 days) is desirable because of the autolytic degeneration of delicate tissues.