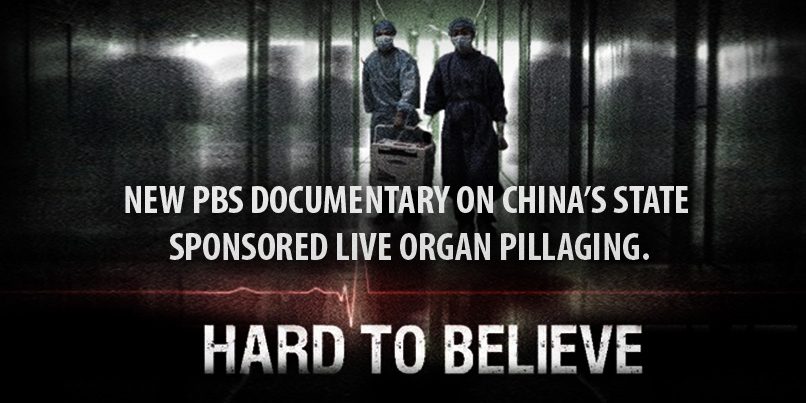 BY THE DAILY BEAST

A new PBS documentary examines claims that China collects organs from live and dead prisoners to traffic on its massive black market.

You may have seen them handing out flyers in small groups on city streets. Their hands moving in the slow-motion style of Tai Chi, silently protesting at their 13-year, 24-hour vigil in London, or in the annual demonstration at United Nations headquarters in New York. Their serenity is in stark contrast to the images often being passed out: gruesome torture wounds and bloodied bodies. “Stop Organ Harvesting in China,” some signs read.

These are Falun Gong practitioners, a minority spiritual group in China. They claim that the Chinese government is torturing them and harvesting their organs, and they want to know why no one is listening.

A new documentary seeks to explore why the world has turned a blind eye to years of allegations that China is arbitrarily imprisoning this minority religious group and then torturing or killing them, selling their organs, and getting rich off transplant tourism.

Hard to Believe investigates claims that the Chinese government has been farming organs from still-living prisoners of conscience. But it focuses largely on why the world has failed to act in the face of overwhelming evidence that such practices are being carried out. The problem, it concludes, is that the abuses against Falun Gong in China are impossible to comprehend.
The documentary, which airs on PBS and will be released digitally for a week. was timed to coincide with the visit of Chinese President Xi Jinping to the United States and his address to the United Nations on Monday. Last week, hundred of Falun Gong supporters took to the streets during Xi’s visit to Seattle, holding signs about persecution and organ theft.

Falun Gong was started in the 1990s, amid a flourishing of small spiritual movements in China. With a focus on meditation, karma, and spiritual teachings, it caught on rapidly. Within seven years, an estimated 100 million people called themselves devotees of the doctrine.

Fearing a large mobilization, the government decried Falun Gong as a dangerous cult and cracked down in 1999, banning the practice entirely and sending thousands of practitioners to labor camps. This ban continues, and in 2014, China placed the group at the top of its list of “most active cults.” Experts studying the movement disagree over whether the movement could be described as a cult. Though there is no leadership hierarchy, the followers are devoted to the founder, Li Hongzhi. The group has occasionally stirred up controversy outside China as well.

Hard to Believe focuses on the research of author and China analyst Ethan Gutmann, as well as a Canadian investigative team, international medical ethicists, and testimony from former Falun Gong prisoners. Gutmann, a former adjunct fellow at the conservative Foundation for Defense of Democracies who specializes in China and who was there as the crackdown occurred in the late ’90s, believes that between 500,000 and 1 million Falun Gong are in detention facilities at any given time. After interviewing former detainees, Gutmann estimates that 65,000 Falun Gong were allegedly killed for their organs between 2000 and 2008.

Gutmann says he first heard rumors of organ harvesting while interviewing released Falun Gong detainees. He was struck by a seemingly minute part of their experience: the physical exam. The described tests, Gutmann says, were unusual in that they did not check for physical ability, but for internal organ health. He said they told him the exams included tests of the liver, kidneys, and cornea. “A chill went down my spine,” he remembers. “I thought, ‘Oh my God, this is real.’”

He said they told him the exams included tests of the liver, kidneys, and cornea. “A chill went down my spine,” he remembers. “I thought, ‘Oh my God, this is real.’”

Gutmann says he was presenting his case at in London when a conference attendee stood up and announced he had taken part in the practice. According to Dr. Enver Tohti’s account in the film and testimony given to the European Parliament, he was a surgeon in Xinjiang, China, when, in 1994, he was asked by his hospital superiors to assemble a mobile surgical unit. He claims he was taken to an execution site and ordered to remove the organs from a living man with a non-fatal wound. The boss who brought him then told him to “remember nothing happened today,” he says, and he didn’t consider what he did criminal until leaving China and moving to the United Kingdom. “I’m certain this kind of organ experiment started from Xinjiang early,” Tohti says in the film. Other Chinese defectors have claimed they performed similar procedures on dead prisoners.

When Canadian human-rights lawyer David Matas began investigating organ transplants in 2006, he says he found that “transplant volume increased substantially after the persecution of Falun Gong began.” His report (PDF), done in conjunction with former Canadian Secretary of State David Kilgour, concluded that between 2000 and 2005, 41,500 organ transplants were performed in China. By comparing the number of actual death-row prisoners with the number of organ transplants occurring in China, they came up with no explanation for where the body parts were sourced. The income from this trade was enormous, they also found, pricing organs in the tens of thousands: hospitals were charging $30,000 per cornea, $62,000 for a kidney and $130,000 for a liver or heart, but the money trail was untraceable from there. They dubbed it a “billion-dollar business in China.”

The income from this trade was enormous, they also found, pricing organs in the tens of thousands: hospitals were charging $30,000 per cornea, $62,000 for a kidney and $130,000 for a liver or heart, but the money trail was untraceable from there. They dubbed it a “billion-dollar business in China.”

“The question is, when are we going to start doing something about it?” asks Arthur Caplan, a professor of bioethics at New York University’s medical school, in Hard to Believe.

The U.S. Congress had overwhelming support for a bill that “expressed concern over persistent and credible reports of systemic state sanctioned organ harvesting from non-consenting prisoners of conscience” in 2013, but it vanished at the retirement of the 113th Congress.

That same year, the European Parliament passed a resolution condemning China for the alleged practice and requesting an explanation for the unusually high quantity of organ transplants.

“[T]he People’s Republic of China performs more than 10,000 organ transplants per year and 165 Chinese organ transplant centers advertise that matching organs can be found within two to four weeks, yet as things stand China does not have an organized or effective public system of organ donation or distribution,” the resolution noted. As comparison, during the first half of this year, the U.S. conducted 15,000 transplants, according to the United Network for Organ Sharing.

In light of these concerns, a number of countries, from Israel to Spain, have made it illegal for their citizens to travel to China to get organ transplants.

At its core the documentary seeks to answer the question: If this injustice has been ongoing for decades, why do so many people remain oblivious?