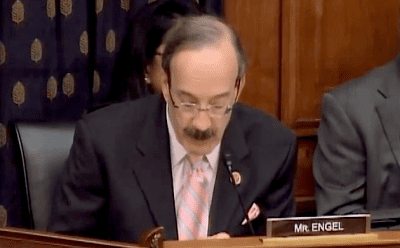 WASHINGTON, DC-Representative Eliot L. Engel, the leading Democrat on the House Committee on Foreign Affairs, today delivered the following remarks at a full Committee markup of a resolution expressing concern over reports of state-sanctioned organ harvesting in China (H.Res. 281).

“Chairman, thank you for holding this important markup…”

“I also support H.Res. 281, introduced by my friend Ileana Ros-Lehtinen, and the Royce amendment to that resolution.  This measure shines a light on disturbing allegations that China has engaged inorgan harvesting from prisoners, including Falun Gong practitioners and ethnic Uighurs.

“Forced organ harvesting is an unconscionable violation of human rights. The targeting of individuals based on their faith or ethnicity is equally deplorable and must not be tolerated.

“In 2012, Chinese authorities committed to ending the practice of transplanting organs from executed prisoners.  Last year, the government announced plans to create a voluntary organ donor system.  But today, we have no evidence that China is living up to its word on either count.

“I hope the State Department will continue its good work of reporting on human rights practices in China, including allegations of organ harvesting from political prisoners.

“And finally, I would like to thank Representative Juan Vargas for introducing H.Res. 663, expressing the urgent need to protect religious minorities in Iraq from persecution by ISIS.

“Last month, the leadership of ISIS announced that the Christians of Mosul-Iraq’s second-largest city and one of the world’s oldest Christian communities-must convert to Islam, pay a “protection tax,” leave, or face execution.  Understandably, most of Mosul’s 35,000 Christians are fleeing to territory controlled by the Kurds.

“People of all faiths should be alarmed by the situation in Iraq.  This measure reiterates our commitment to the protection of religious freedom and calls on the State Department to work with the international community to help find safe havens for those trying to escape ISIS.  It also calls on Iraq to establish a Special Representative for Religious Minorities.  As thousands suffer under the brutality of ISIS, we need to look for ways to protect the basic rights and dignity all Iraqis.

“So, Mr. Chairman, thank you again for holding this markup and for working with us in a bipartisan manner.”