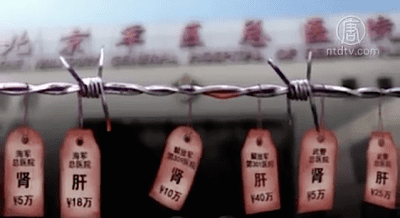 Xinhua News Agency reported that Military Prosecutor’s Office has concluded the investigation of Xu Caihou’s accepting bribery on the 27th. Xu Caihou was said to have received extra large amounts of bribery and Xu also confessed to these crimes.

Zhao Yuanming: Xu Caihou has been a high ranking official in the military for a very long time. He was deeply involved in the army in politics and logistics. He was a behind the scenes director in the Military’s role in live organ harvesting of Falun Gong practitioners. He was particularly appreciated by Jiang Zemin for that reason.

The 71-year-old Xu Caihou was known as the military representative of former Communist leader Jiang Zemin. On June 30, Xu was deprived of his title in the Party, the Army, and the military ranking and transferred to a court martial.

Overseas media have revealed that Xu Caihou had participated in the coup plan of Bo Xilai and Zhou Yongkang. He has also been a main correspondent in the army on persecution and live organ harvesting of Falun Gong practitioners.

On July 20, 1999, Jiang Zemin ordered the persecution of Falun Gong with the extermination policy of ‘killing is nothing but suicide’ and ‘no confirmation of body identity but direct cremation.’

In the peak of suppression, as many as 1,700 doctors from 600 hospitals of 23 provinces, cities and autonomous regions have engaged in live organ harvesting for transplant.

In a telephone investigation recording, Bai Shuzhong, former Minister of Health for the PLA General Logistics Department, admitted that Jiang Zemin had ‘instructed’ the harvesting of Falun Gong practitioners’ organs for transplantation.

Bai Shuzhong: back then, it was Chairman Jiang…. Chairman Jiang, (I) heard there was an instruction paper, about people selling kidneys for transplant surgeries, this, I should say, it was not just the military who was doing the kidney transplant.

WOIPFG investigator: We also obtained some intelligence, that is to say back then, the Joint Logistics Departments (of the Military Regions) had detained a number of Falun Gong people as live donors, is that true?

Bai Shuzhong: this, this is back then, ah, I think, at least this is how I remembered, because back then after Chairman Jiang issued the order, we all did a lot of anti-Falun Gong work…Because Jiang paid a lot attention to this matter back then, put a lot of emphasis on this matter.

On Oct. 21, WOIPFG released the latest investigative report showing that in May 2012, former Defense Minister Liang Guanglie had admitted the following during his visit to the United States. The Central Military Commission had met to discuss organ harvesting on living Falun Gong practitioners.

On Oct. 28, WOIPFG released a list of 100 military hospitals and 2,108 medical staff alleged to have engaged in organ harvesting on living Falun Gong practitioners. WOIPFG also recognized that as confidential information in the military, these data are far less than the actual data.