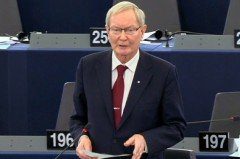 The European Parliament meeting in Strasbourg, France on Dec. 12 passed a resolution that condemns the practice of forced organ harvesting in China.

This video shows a selection of European Parliament members speaking in the debate in support of the resolution.

The resolution received broad-based support from five different political groups. Parliament members gave a variety of reasons for their votes, but came back to a few themes: the moral necessity of opposing the practice of forced organ harvesting; support for basic human rights; the good of the Chinese people; and the need for Europeans not to be complicit in these crimes.

Immediately after the resolution passed, Laima Liucija Andrikiene, MEP from Lithuania, summarized what she had said in the debate for New Tang Dynasty Television: “I said that systematic and state-orchestrated organ harvesting in China including political prisoners, prisoners of conscience, including Falun Gong practitioners, is absolutely unacceptable and should be ended immediately.”

The practice of forced organ harvesting is linked to the Chinese Communist Party’s persecution of Falun Dafa (also known as Falun Gong), a peaceful spiritual practice. Essays in the book State Organsshow that Falun Dafa practitioners, who make up a large portion of the labor camp population, are the largest single source of organs. These essays corroborate the groundbreaking work Bloody Harvest in estimating the number of Falun Dafa practitioners killed by organ harvesting to be in the tens of thousands.

After the vote, Tunne Kelam of Estonia, the MEP who introduced the resolution, told NTD, “We should have done this earlier, but I think we have learned very much during this process of support. Now we are much more clear about what is going on in China, and much more determined to continue our support and express our solidarity to our Chinese friends.”

Kelam said there was a “very, very obvious” lesson to be drawn by people in China and around the world from the practice of forced organ harvesting in China, “You have no guarantee for human liberty, human dignity, under dictatorship.”

Monica Macovei, MEP from Romania and former Romanian minister of justice, was one of the authors of the resolution.

She told NTD that the resolution’s message was that “We can’t accept that people have their organs taken away without their prior consent and against their wishes,” Macovei said. “The answer is ‘no,’ we don’t accept that.”

Macovei expects that after the next Parliament is seated there will be discussion of regulations prohibiting Europeans from receiving transplanted organs from unwilling victims.

Laima Liucija Andrikiene expressed her hope to NTD that in China the resolution “will be received positively like a goodwill wish from people who care.”