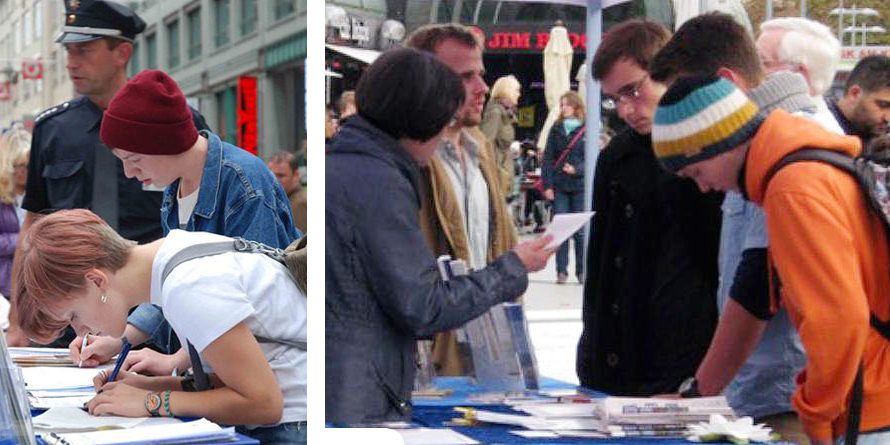 “We are aware of the state-sanctioned organ harvesting in China,” an immunologist told Falun Gong practitioners at their petition campaign in Hannover, Germany on October 18, 2014.

Falun Gong practitioners collected signatures on the petition drafted by “Doctors Against Forced Organ Harvesting” (DAFOH), and received support from local medical professionals in Hannover, the home of Medizinische Hochschule Hannover, one of the best German medical schools. The school plays a leading role in the field of organ transplantation.

The immunologist said, “I recently went to an organ transplant conference in Mannheim. A medical doctor at the conference, who practices Falun Gong, gave an excellent talk on the issue of organ harvesting in China.

“In the talk, detailed evidence was shown, which indicated where the organs came from, and how the Chinese government commits genocide against Falun Gong practitioners and Christians for organs. The crimes are even sanctioned by the military.”

He expressed his appreciation to Falun Gong practitioners for their efforts in bringing this information to the public, and encouraged them to keep up the good work.

Another local surgeon, who talked to practitioners for a long time, had never before heard about Falun Gong or the persecution in China. However, he did know about the organ harvesting.

He related an astonishing experience he had. A few years ago, he had a coworker who was an organ transplant surgeon from China. At work, one day, the Chinese doctor asked him where the local execution ground was. The question, and implications behind it, shocked the German surgeons.

Falun Gong practitioners around the world have been trying to raise awareness of these crimes in the international community, and they are calling for the cooperation of medical professionals.

Kelley Currie, a Senior Fellow with the Project 2049 Institute, which is a policy think-tank in Washington D.C, echoed this calling during an interview by the program “Current” from the Canadian Broadcasting Corp. (CBC).

Currie said at the interview that on this issue, “Relying on governments to address it is merely a very small part of it. Looking at how medical associations can denounce these practices and take a strong stance, especially the surgeons who would be advising patients about organ transplants.”

She believes that it is important to educate doctors, who are aware of this situation, and organizations such as the American Medical Association, American College of Surgeons. Additionally, the Canadian equivalents of these organizations should be aware of this issue, as should counterparts in European countries and other modern economies, and wherever there are shortages of organs, and people who may be driven to transplant tourism.

Many medical professionals in the international community, including the ones from Hannover, have already taken action to stop the crime in China.

At the London 2014 Joint International Congress on Organ Transplants in June, Dr. Nicolus Richter, a surgeon from Hannover specializing in liver and kidney transplants, told Falun Gong practitioners what he and his co-workers did to help with this issue a few years back.

“We discussed in our department, when we had guests from China who wanted to learn liver transplantation at our center in Germany. We discussed it and decided not to cooperate with that.”

Dr. Richter’s department wrote back to the Chinese doctors, refused to train them in liver transplants, and cited the ongoing forced organ harvesting in China. “It is catastrophic and against humanity!

“I think as Germans, we also have a very strong history in those catastrophes. Nowadays, we have very strong responsibility, and a moral duty, to look at the world where such things are happening, and raise our voices…,” said Dr. Richter.