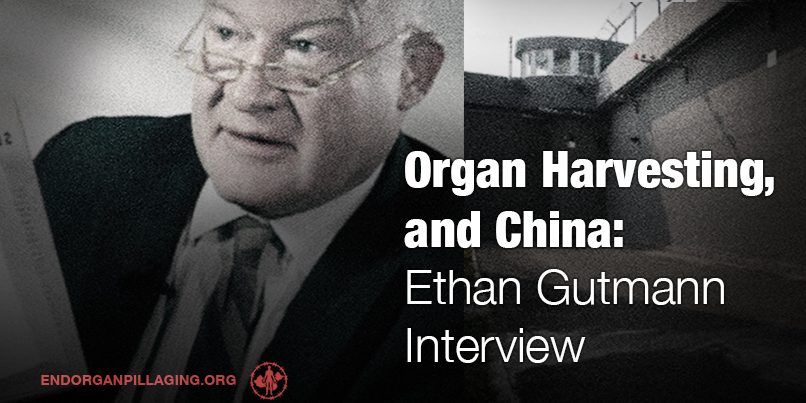 By Shelley B. Blank

An award winning journalist and author reviews the international press on forced organ harvesting in China. Ethan Gutmann is the author of “The Slaughter” (Prometheus, 2014) and “Losing the New China” (Encounter, 2004). He has written widely on China issues for publications such as the Wall Street Journal Asia, Investor’s Business Daily, Weekly Standard, National Review, and World Affairs Journal, and he has provided testimony and briefings to the United States Congress, the Central Intelligence Agency, the European Parliament, the International Society for Human Rights in Geneva, the United Nations, and the parliaments of Ottawa, Canberra, Dublin, Edinburgh, and London. A former foreign-policy analyst at the Brookings Institution, Gutmann has appeared on PBS, CNN, BBC, and CNBC.

Shelley B. Blank: Good morning Ethan, and congratulations on your new book, “The Slaughter.” Where can people get their hands on it?

Ethan Gutmann: Thank you Shelley. Go to the websites for Amazon, Barnes & Noble, or Random House for the hardcover. Here in London most of the big bookstores seem to have a copy or two. Of course, if you are itching to get started immediately you can pay the extra dollar—don’t ask Shelley, it seems counterintuitive to me, too—and download the electronic edition in a minute or so. The German edition will be published in a month or two. I think we’ll see a Chinese, a Czech, and possibly even an English audio edition by the end of the year.

Mr. Blank: Does reading the electronic edition make any difference? Let me phrase that question more broadly: on this particularly alarming subject of government organ harvesting in China, what differences do you notice between the digital readers and Internet press versus the non-digital readers and the traditional press?

Mr. Gutmann: I’ve seen at least one study that demonstrates—and this jibes with my own experience—that electronic book retention is significantly lower. That doesn’t mean reading a book on an electronic device is a waste of time. It does mean that you skim. I certainly do. And if you are reading it on a computer the entire online world—friends, entertainment, sex, news—is just a click away. That last point is germane to your larger question. Increasingly, most news articles are being written for the web—specifically designed for a space where immediate gratification is close by. Web-based articles about forced organ harvesting in China are no exception.

Even activism (research, phone calls, demonstrations, etc.) is being replaced by simply sharing dramatic Internet memes on social media. Hey, I like being presented as a human rights hero as much as the next guy—but you can’t say much in a meme. It’s a soundbite that simply asserts that innocent people are being harvested for their organs. It doesn’t employ evidence. It doesn’t persuade on a deep level. There’s no time for that. In such a world, “The Slaughter” becomes nothing more than a talisman, a relic, a prop to show that there is evidence somewhere and there are real people being tortured and killed. Indeed there are. Yet these people were not just faceless victims. They had names, families and personalities. Do you think that the majority of the­—essentially good-hearted—Western individuals passing these memes around the web have any idea what those names might be? I tried to make the victims real and interesting in my book—actually that’s why I wrote the book—but many people simply don’t slow down enough to read. Journalists writing for the Internet subtly exploit that.

That is why the general knowledge level about forced organ harvesting of China does not really advance; the press does not build on previous findings. Instead it’s all brand new—British women use face-cream containing collagen from executed prisoners! The “Bloody Harvest” report says Falun Gong are being killed! Gosh, the Chinese have suddenly announced that they will stop harvesting prisoners! All of these statements have been reported before. Repeatedly. And yet there is real news to report; we who investigate this subject–Kilgour and Matas, Epoch Times, WOIPFG [World Organization to Investigate the Persecution of Falun Gong], DAFOH [Doctors Against Forced Organ Harvesting]–have made massive strides in our understanding of Chinese organ harvesting over the years. There’s always something new.

Mr. Blank: You said “over the years.” How many? Perhaps this is a good point to ask you to share your thoughts and memories about a colleague who recently passed away: the journalist, Danny Schechter.

Mr. Gutmann: The harvesting investigation began in 2006. Let’s go back a little further. Danny Schechter was a friend and a “co-conspirator” on my first projects in China. In fact, the first video reporting I ever did on Falun Gong—the first demonstration in D.C.—was done in partnership with Danny back in August 1999. We may have been odd-bedfellows politically, but Danny, as the first Western author of a comprehensive book on the repression of Falun Gong, always planted his spear where other leftists were afraid to tread. And way back in 2000, he predicted that the current crackdown on Falun Gong might well “escalate into a tragedy comparable with some of history’s most haunting nightmares.” How prescient. I’ll never forget that guy.

Mr. Blank: With the ongoing human disaster of Chinese state-sponsored organ harvesting in China in mind, how do you think digital literacy and multimedia communications has changed the way we deal with news?

Mr. Gutmann: It’s a paradox, but apathy is actually increasing.

Mr. Blank: You mean that we have more communications coverage now, yet less public response? Fewer people are actually grappling with the information? Is the sheer volume of information overwhelming its meaning?

Mr. Gutmann: Yes, in the sense that the sheer volume of global atrocities­—and their explicit nature, in the case of ISIS, lovingly photographed executions involving children and so on—overwhelms the senses. For example, we just learned that ISIS are harvesting organs. It’s no comparison with the number of innocents being harvested in Chinese military hospitals of course, but try telling that to someone who has just watched a video of a man being burned alive! In our connected world, evil also spreads quickly—in the case of organ harvesting, like a virus. We fight it, but we pay the price in compassion fatigue. The paradox is that when it comes to China, there is no information glut. The volume of useful information is very small indeed. That is why every individual refugee’s story, every fact, is so terribly precious.

Mr. Blank: In China the government now has the ability to turn off communications and news like a water tap. You have appeared before government committees on such subjects as the “Golden Shield” and Cisco Systems and spoken of their “ability to monitor online chatting services and mail, identifying IPs and all of the person’s previous communication, and then being able to lock in on the person’s location… And then the arrest is carried out.”

Mr. Gutmann: That is the reality in China, yes. In the West, the Internet creates an illusion that we are all connected, all-seeing, like a god. We have one Facebook friend from China and we think we know China. We don’t know China and they don’t either; they live in an elaborately constructed cubicle in China. That’s the real meaning of the Big-Brother Internet. And that authoritarian template has a future, one that goes beyond China, and beyond Assange or Snowden’s warnings to the West. Western companies may have just gone along for the ride in many cases, but what they helped to construct was far more clever and dangerous than anything the NSA ever created.

Mr. Blank: You have interviewed over 100 witnesses including Falun Gong survivors, doctors, policemen, and camp administrators. You have made statements that 65,000 Falun Gong practitioners were killed for their organs from 2000 to 2008, and that between 450,000 to 1 million Falun Gong practitioners are detained at any given time. And there were victims from other groups: Uyghurs, Tibetans, House Christians. As a journalist, how do you feel about the way the international press is reporting this disaster? And what more do you think the press should be doing?

Mr. Gutmann: I would ask the press to stop reinventing the wheel, and start doing some primary investigation of their own. Between Kilgour, Matas, and my own work, you can find a road map to huge uncharted areas in our understanding of harvesting in China—for example in the composition of organ tourists from the West. It’s wide open territory, ripe for exploration.

Mr. Blank: Do you think the American medical profession could anything do more to change this situation, then they are now doing?

Mr. Gutmann: Shelley, they are the biggest players on the board. The Chinese announced that they stopped harvesting prisoners on January 1st, 2015. In fact, they have made very similar promises since 2012. This time however, they left an internal loophole: prisoners are allowed to be voluntary donors under the new scheme. It is unclear how prisoners will be counted and indeed, Chinese transplant and donation numbers are increasingly untethered to any plausible reality. Yet the Western medical establishment is seriously considering publicly rewarding the Chinese for this sham of an announcement—apparently they are too polite to even bring up the concept of verification!

I was recently asked to write an article aimed at the American medical establishment beseeching them not to proceed with this plan. It may seem petty, but I’ve experienced some emotional resistance to writing that article because I would simply be repeating the final words of my book: “No Western entity possesses the moral authority to allow the party to impede the excavation of a crime against humanity in exchange for promises of medical reform. As a survival mechanism of our species, we must contextualize, evaluate, and ultimately learn from every human descent into mass murder. Ultimately it doesn’t matter if historians reach a consensus that Chinese organ harvesting has an echo of the medical corruption of Unit 731, or the systemic brutality of the Gulag Archipelago, or the conversion methods of the Spanish Inquisition. The critical thing is that there is a history. And only the victims’ families can absolve the party from its weight.”

Mr. Blank: What do you think would bring positive results and attention to this international disaster?

Mr. Gutmann: We must use the tools at hand. Yes, the Internet promotes a short attention span where tweets and memes are king, and Wikipedia is treated as an authoritative source. Yet the Internet has also promoted one very powerful idea: we can all participate. And you can. Yet, like stepping away from a campfire to see the stars in the night sky, you may have to step away from the screen for a moment. Read “The Slaughter”—read it critically! Read “Bloody Harvest.” “State Organs “too. Then develop your own substantive research, your own creative projects, and your own brand of activism. The tools may have indeed changed, but the struggle against evil appears to be eternal.

Shelley B. Blank has worked with major national and international newspapers as a journalist as well as a corporate executive. He has produced programs for Public Radio and lectured on modern multimedia communications and technology.