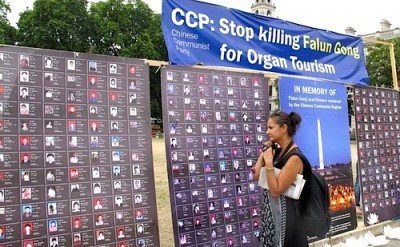 LONDON – A unique scene unfolding on the square in front of Parliament caught the attention of passers-by. A group of Falun Gong practitioners wearing yellow T-shirts or golden exercise outfits demonstrated the five sets of Falun Gong exercises. Beside them was a large banner worded, “The world needs Truth, Compassion, Tolerance.” The activity was part of a series of events that Falun Gong practitioners held on the 15th anniversary of the persecution, to raise awareness about Falun Gong and the Chinese Communist Party’s (CCP) brutal persecution of the peaceful cultivation practice.

Ten Members of Parliament (MPs) sent letters of support for the event. Some MPs came in person to express their support and signed the petition against the CCP’s live organ harvesting.

MP Mr. Richard Graham chairs the All Party Parliamentary Groups for Pensions, Regeneration Through Innovation, the Commonwealth, Indonesia, and China. Mr. Graham stopped at the event and talked with Falun Gong practitioners. Several practitioners had been invited to his office earlier in the day to discuss Falun Gong and the persecution.

MP Mr. Julian Lewis came to the event to express his support and signed the petition against the CCP’s forced live organ harvesting. MP Mrs. Mary Glindon met a practitioner who was distributing flyers outside the building. She offered, prior to signing the petition, “I know Falun Gong. I want to sign the petition.”

Many people expressed their support for the practitioners’ efforts to end the persecution. Approximately 800 people signed the petition, the majority of them tourists from other countries. Many people took photos of the exercise demonstration, and read the flyers and other relevant information. A number of people talked with the practitioners and asked questions. Many were shocked upon hearing of the CCP’s live organ harvesting of prisoners of conscience.

A group of German high school students were attracted by the practitioners’ activities. After a practitioner likened the persecution of Falun Gong to the Nazi’s crimes, the students readily signed the petition. 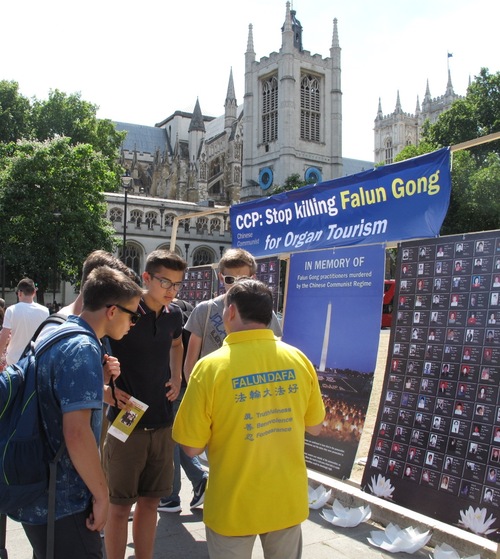 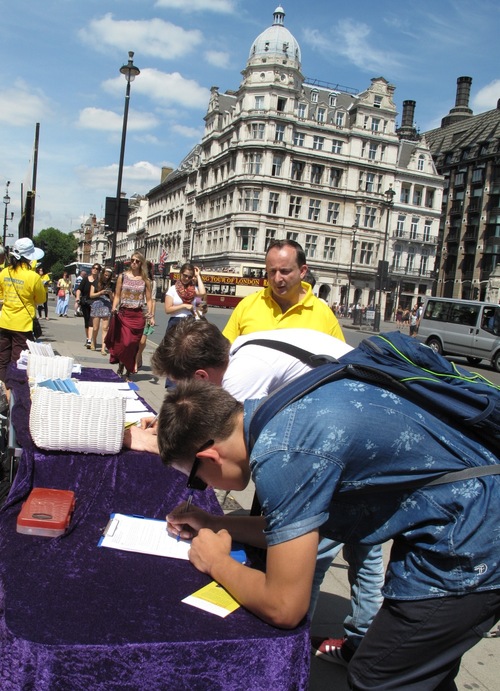 Signing the petition against the persecution.

A family of three from Italy watched the practitioners’ event across the street for quite a while and asked for more information from a practitioner distributing flyers. They signed the petition form later. 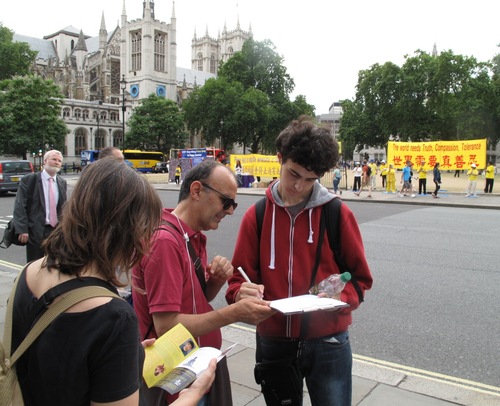 A family of three from Italy sign the petition. 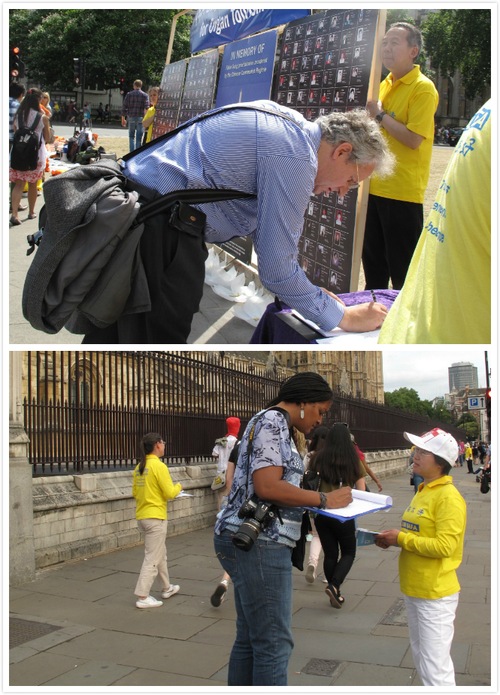 Tourists from around the world sign the petition against the persecution. 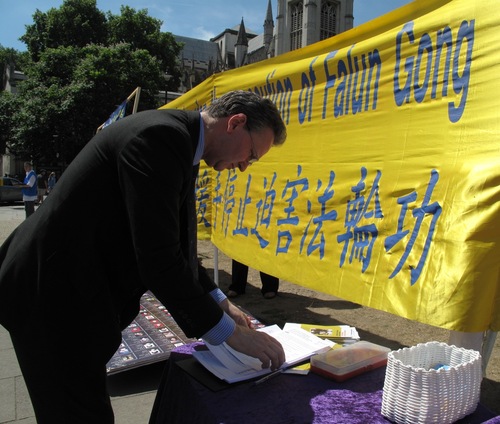 Mr. Robin Marsh, UK-Secretary General of the Universal Peace Federation, expresses his support in front of the UK Parliament. Mr. Robin Marsh signs the petition calling for an end to the persecution.

Mr. Robin Marsh, UK-Secretary General of the Universal Peace Federation, came to the event to express his support. He knows Falun Gong and believes that the principles of Truthfulness-Compassion-Forbearance have significant meaning for world peace. He feels that such principles should be taken as basic values for handling international relations. Mr. Marsh said, “Falun Gong has suffered incredible persecution in China. As a member of the human race, we must pay attention to this.” He hoped that the UK government would do the same as the European Parliament and pass a resolution condemning the CCP’s live organ harvesting.