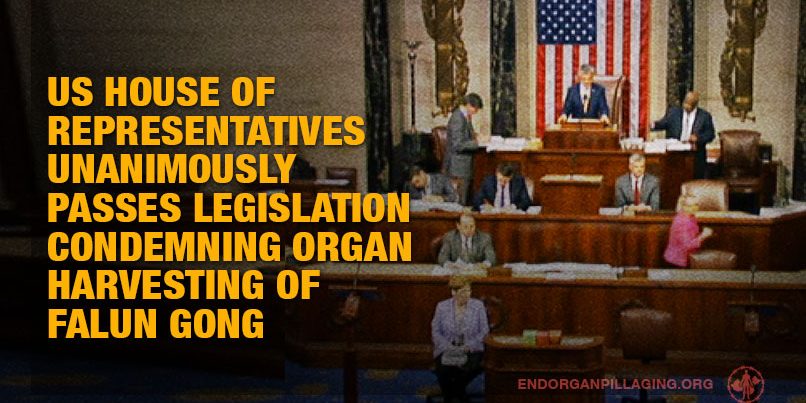 A decade after evidence emerged of one of the gravest and most extraordinary human rights violations today, the United States House of Representatives has added its voice to the chorus of censure.

H.Res 343, an item of legislation that expresses concern by the House of Representatives on “persistent and credible reports of systematic, state-sanctioned organ harvesting from nonconsenting prisoners of conscience in the People’s Republic of China” was passed unanimously on the evening of June 13, with impassioned speeches on the floor by members of Congress.

“This legislation is an important step in bringing accountability and transparency, to maybe one of the great crimes of the 21st century: the 17-year effort to eliminate [the] Falun Gong practice from China,” said Rep. Chris Smith (R-N.J.), a co-sponsor of the resolution. “I strongly believe that the campaign to eradicate Falun Gong will be seen as one of the great horrors.”

Rep. Ileana Ros-Lehtinen (R-Fla.), who introduced the resolution, said it “condemns China’s ongoing gruesome practice of harvesting organs from nonconsenting prisoners of conscience and religions and ethnics minorities … a sickening and unethical practice [that] must stop.”

The passage of H.Res 343 amounts to the most significant legislative confirmation of the reality of the crime of mass organ harvesting of Falun Gong. The atrocity has been in evidence for over a decade, yet has for years lacked the acknowledgement and condemnation that its severity would demand.

The resolution covers the killing of other groups for organs, too, though researchers said that practitioners of Falun Gong have been the most heavily targeted. Falun Gong is a traditional Chinese discipline of meditation that exploded in popularity through the 1990s, before falling victim to a statewide campaign of elimination in 1999.

“Over the past four years the U.S. Congress has looked into the evidence on forced organ harvesting through previous resolution drafts and hearings, and today has recognized that forced organ harvesting is taking place and needs to stop,” said Dr. Torsten Trey, the executive director of Doctors Against Forced Organ Harvesting, a medical advocacy group in Washington.

Ethan Gutmann, an investigative journalist who has published a book on the organ harvesting of Falun Gong, wrote in an email message: “Congress has openly recognized that prisoners of conscience are being slaughtered for their organs in China. They say the first step is to recognize the problem. Well, we have, and now we have to do something about it.”

This will be the first acknowledgement by the U.S. government of this abhorrent behavior, and hopefully will bring this terrible practice to light throughout the United States.

Gutmann, like a number of other independent researchers and authors, has been chipping away at the problem for many years. Events of the past year or so, including the passage of the resolution, show that the grisly findings of their research are being increasingly accepted in high-profile public forums.

Michael Shapiro, the surgical residency program director at Rutgers New Jersey Medical School and a member of the ethics committee of The Transplantation Society, wrote in an email that he was thrilled that the House of Representatives has passed the resolution.

“This will be the first acknowledgement by the U.S. government of this abhorrent behavior, and hopefully will bring this terrible practice to light throughout the United States,” he added.

Ros-Lehtinen said in her speech, “The Chinese regime’s brutal repression, and human rights violations, are well-known, but it is the horrific treatment of the Falun Gong practitioners, Mr. Speaker, that is particularly egregious, yet does not receive the attention that it deserves.”

She added, “Followers of Falun Gong are among China’s most vulnerable to state-sanctioned abuse, which leaves them as likely victims to this ghoulish practice.”

Since 2006, researchers have presented evidence that Falun Gong practitioners have been blood-typed and organ-matched while in custody, and then slaughtered for their vital organs as needed. This on demand organ procurement system is opposite to the rest of the world, where organ recipients often need to wait months or even years until tragedy unexpectedly strikes a compatible donor.

Since around 2000, Chinese hospitals have been able to guarantee minimal wait times—sometimes just days, other times weeks, or a couple of months—for organs that require the death of the donor. These include livers, hearts, and lungs.

The death toll of this form of abuse is not clear, but recent research suggests it could stretch into the hundreds of thousands.

With H.Res 343, the U.S. Congress joins the European Parliament, the United Nations Committee Against Torture, the United States Commission on International Religious Freedom, and other global bodies that have highlighted the evidence of organ harvesting from Falun Gong and demanded that China come clean on its organ sourcing practices.

Though the resolution is not a binding law, its symbolic power is immense for legitimizing and spreading awareness of the crimes it refers to, according to researchers and advocates who have long worked on the topic.

“You wouldn’t have an official text approved from Congress, or any parliament, if the members were not convinced that the crime takes place. The passing of the resolution is recognition that it really takes place,” said Trey, of Doctors Against Forced Organ Harvesting (DAFOH).

Trey founded DAFOH soon after the evidence of organ harvesting of Falun Gong emerged, and has worked to continually unearth evidence on the topic since then.

“The Chinese Communist Party responds to us like an amoeba: we hunt them with our information, and then they adapt to it and keep moving,” Trey said in an interview on the sidelines of the American Transplant Conference in Boston.

The Chinese Communist Party responds to us like an amoeba: we hunt them with our information, and then they adapt to it and keep moving.

David Kilgour, a former Canadian parliamentarian and co-author of the first major report into the topic in 2006, called H.Res 343 “another significant step forward by an important legislative body.” He added, “Others in the rule of law world should do likewise as quickly as feasible.”

As the reality of the crime sinks in, those hearing about it are apt to respond in the manner of Rep. Eliot L. Engel (D-N.Y.), who spoke on the House floor, “These allegations are particularly egregious: Authorities in Chinese prisons targeting prisoners, because of their religious beliefs, and then making a profit by trafficking these victims’ organs. I cannot think of hardly anything that is more disgusting than that.”

Human rights advocates may next attempt to bring the matter to the attention of the Senate, and also leverage H.Res 343 to exhort the State Department to do more.

“It is welcome and also timely,” said David Matas, a human rights lawyer based in Canada who co-authored, with David Kilgour, the first major organ harvesting report.

In an email, Matas wrote, “I have been involved in human rights advocacy almost all of my professional career. My experience is that opposition to human rights violations starts slowly, with the voice of the victims who are initially met with incredulity and indifference. The effort builds momentum over time and eventually becomes inexorable. The struggle starts from the fringes and eventually moves to the center. The U.S. resolution, to quote Winston Churchill, is “the end of the beginning.” 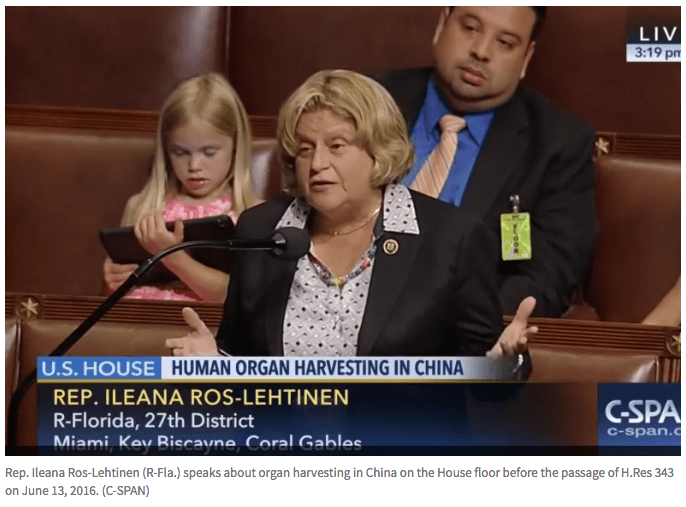 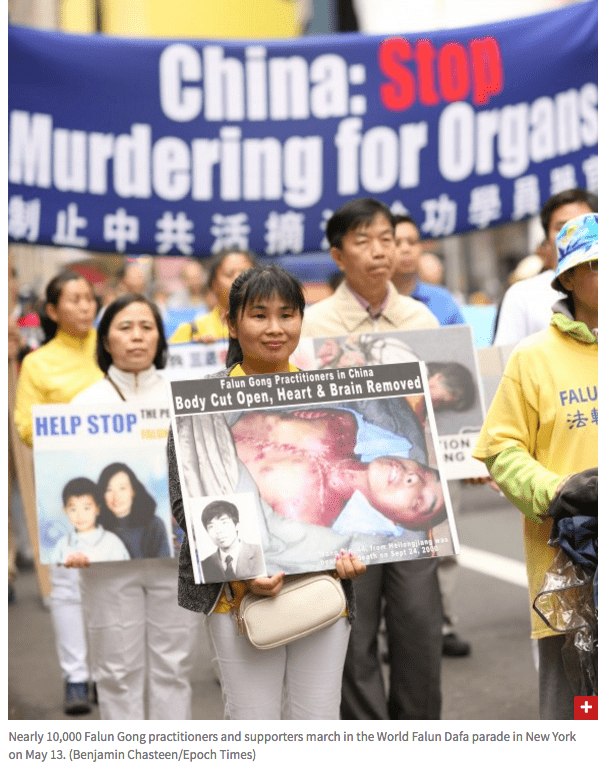 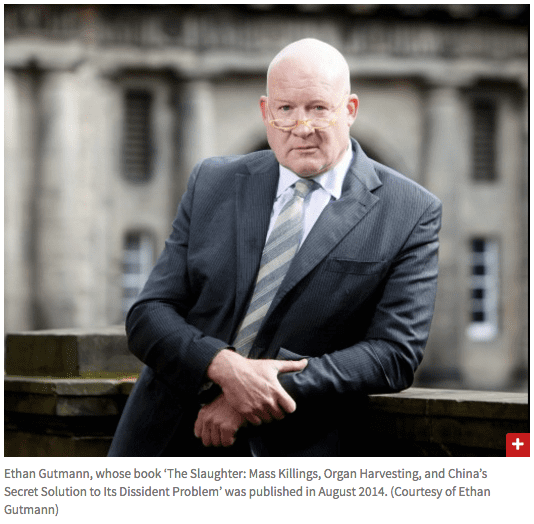 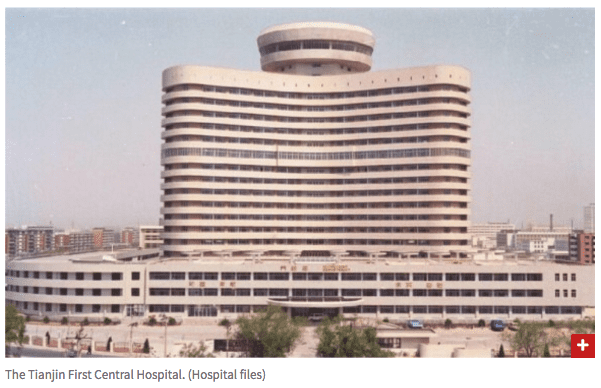 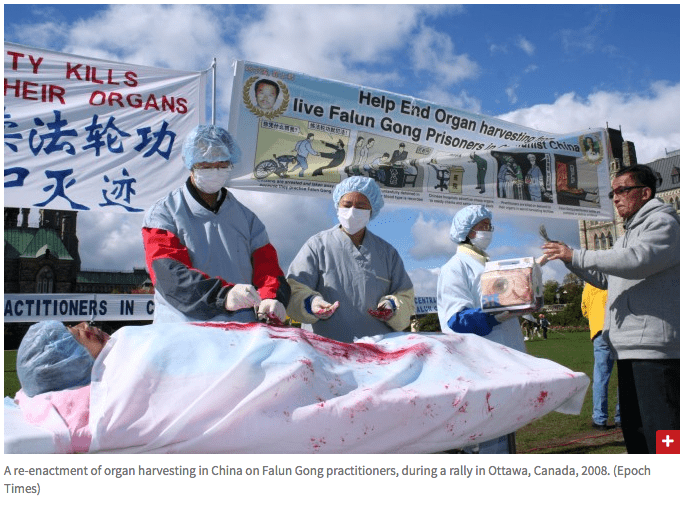 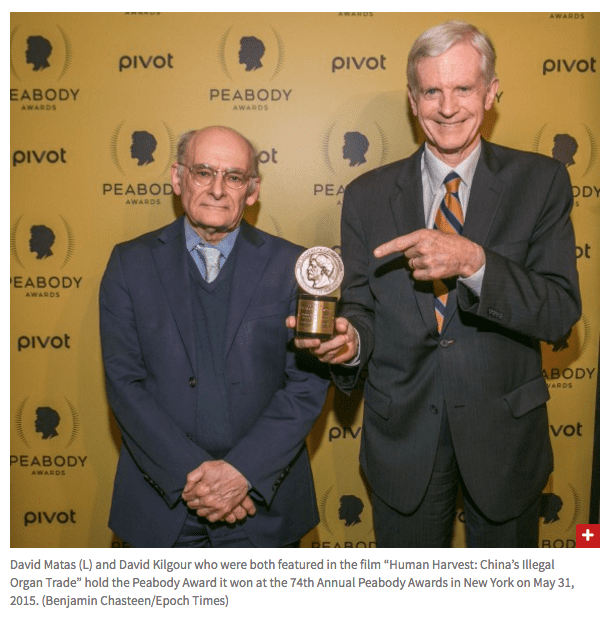