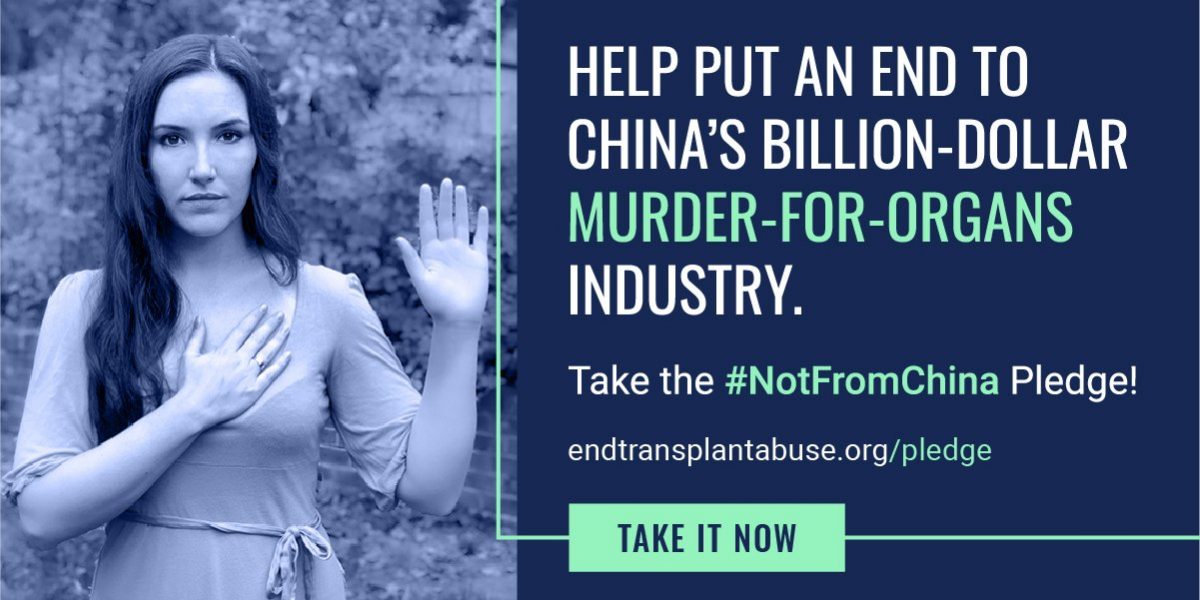 Launch of a global call to action to raise awareness of China’s multi-billion-dollar #murderfororgans industry for Human Rights Day.

December 8, 2021 – Ahead of Human Rights Day, on December 10, End Transplant Abuse in China (ETAC), the Victims of Communism Memorial Foundation (VOC) and China Aid have launched the #NotFromChina Pledge to help stop #murderfororgans.

The campaign responds to a growing body of evidence proving that the Chinese Communist Party is killing ethnic and religious minorities to supply an on-demand murder-for-organs industry worth billions.

In 2020, the China Tribunal concluded that “forced organ harvesting has been committed for years throughout China.” More recently, in 2021, twelve U.N. Special Rapporteurs and human rights experts issued a joint correspondence to the Chinese Government regarding credible evidence that it is taking place. Targeted victim groups include religious minorities like Uyghur Muslims and Falun Gong practitioners. Evidence indicates that Tibetans and House Christians are also at risk.

The Pledge is a personal commitment not to receive an organ from China if one becomes ill and reads as follows:

On the grounds of conscience and basic humanity, I solemnly pledge that I will not receive an organ transplant from China.

“Campaign goals are two-fold,” said Susie Hughes, ETAC’s Executive Director. “We aim to boost the already growing awareness of the issue while building a global movement of people who are willing to take a stand against this barbaric practice that the Chinese Communist Party carries out.”

“It is an abomination that today in the 21st century, innocent individuals, including prisoners of conscience, are killed to harvest their organs for profit. The free world cannot stand by as the Chinese Communist Party continues to lie about this widespread practice in China blatantly,” said Ambassador Andrew Bremberg, the President and CEO of the Victims of Communism Memorial Foundation, about why he took the Pledge. “With the launch of this campaign ahead of Human Rights Day, we call on all people of goodwill to personally commit to ending this horrific practice by committing not to receive an organ transplant from China.”

The Pledge campaign is inspired by the Taiwan International Religious Freedom Forum in 2019, where China Aid led over 70 activists, politicians, and religious leaders from around the world to sign a pledge never to receive an organ from China.

“It was magical in Taiwan when we all took the pledge,” remembers Bob Fu, Founder and President of China Aid. “I am thrilled that this initiative is now going global as it will strengthen our movement and send a clear message to China that they cannot hide this crime any longer.

The #NotFromChina Pledge is a great way to raise awareness of forced organ harvesting,” said Professor Wendy Rogers, Chair of ETAC International Advisory Committee. “Taking the pledge is a sign of solidarity for everyone who wishes to condemn China for killing victims for their organs.”

More information on the #NotFromChina Pledge and why it is so important to take the Pledge can be found at endtransplantabuse.org/pledge.