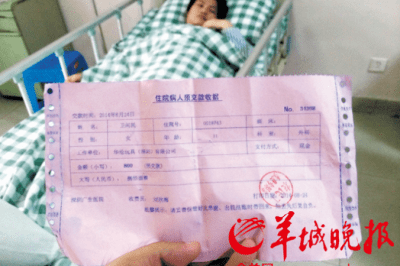 A Chinese woman in Shenzhen City recently went to hospital for what she thought was a small surgery: to remove kidney stones. During the surgery, however, doctors told her that her left kidney must be removed for her to survive. After she sought an explanation for what was going on, she was reportedly told “we’ll compensate you as much as necessary.”

The 32 year-old Wei Jianmin was diagnosed with kidney stones on Aug. 24 in Guangsheng Hospital, in Shenzhen, according to the state-run Yangcheng Evening News. After learning from a doctor that surgery to remove the stones is minimally invasive and only costs 800 yuan ($130), she opted to do it right away.

By 2 p.m. the same day she was in an operating room.

She awoke from anesthesia at around 7 p.m., still lying on the operating table. At around 9 p.m, a group of doctors and nurses came in and drew some blood. They then came back and said that needed to take out her left kidney.

“The doctor told me that it’s a must to remove the kidney, otherwise I won’t survive until tomorrow,” Wei recounted, in interviews in the Chinese press.

The doctors persisted, and Wei was prevailed upon to sign an agreement to take the kidney out, despite repeatedly asking for a referral, the report says.

When they heard about what happened, Wei’s family was confused and angry. They went to the hospital the following day, demanding an explanation.

The hospital had no details for them, simply stating that the decision was made with the consultation of experts. “The hospital told us not to make noise and trouble. They would compensate us as much as necessary,” Wei’s boyfriend, Mr. Pan told the reporter.

Wei’s surgery was a ureteroscopic pneumatic lithotripter, which is supposed to be a minimally invasive procedure that is short, simple, and has a high rate of success. Even a failed surgery shouldn’t cause the need to remove the kidney, an expert told Yangcheng Evening News.

Apparently concerned that she had become victim to illegal organ trade, Wei asked what the hospital did with her kidney after they removed it. They said it had been sent for examination somewhere in Guangzhou Province. No further details were provided.

Local police have not commented; Yangcheng Evening News said it is continuing to look at the matter.

Illegal organ harvesting and trafficking has taken place for decades in China, first with executed prisoners, then with Uyghur Muslim prisoners in the 1990s, and later with Falun Gong prisoners beginning in around the year 2000, after the persecution of the practice began in 1999, according to recently published research.

Small scale organ trafficking rings have also operated around China, and these criminal gangs are broken up with much fanfare in the state press, though state-organized harvesting is never acknowledged.