Forced organ harvesting of Falun Gong practitioners has gained more and more attention from journalists, doctors, and human rights activists, as a result of practitioners’ persistent grassroots efforts to raise the awareness. Exposés of this crime against humanity have recently appeared in a new book, and in articles in American Journal of Transplantation and New York Post.

Reports on Chinese Communist Party (CCP) official newspapers have also published contents that pointed to organ harvesting committed by Zhu Yunsong, former deputy director of the Kidney Department at the General Hospital of Guangzhou Military Region. Zhu was arrested at the end of July for “organ transplant abuse.”

The article quotes Ethan Gutmann, who recently published a new book The Slaughter: Mass Killings, Organ Harvesting, and China’s Secret Solution to Its Dissident Problem, that organ harvesting in still going on in China.

“… in January 2014, Omar Healthcare Service, a Chinese organ broker ‘authorized by the Government of People’s Republic of China,’ advertises freely to Western organ tourists on the Web,” says Gutmann.

According to New York Post, “Organs coming out of China — which sometimes wind up in American bodies — are taken not just from the worst Chinese criminals, as China claims, but also from prisoners of conscience, especially practitioners of the banned and derided practice Falun Gong, who never committed, or were even accused of, capital crimes.”

“Making this far worse, though, are the revelations that authorities aren’t waiting for death to claim their bounty. In an effort to increase the chances of successful transplant, Gutmann writes, the organs are often taken from prisoners while they are still alive. Gutmann estimates that to date, more than 64,000 Falun Gong practitioners have suffered this fate, with more being added to the count every day.”

CCP official media made mention of an organ trade case in Nanchang City, Jiangxi Province on July 26. The organ trade group operated in Jiangxi and Guangdong provinces during October 2011 and February 2012. They “raise” organ “donors” of about 40 people and fly the kidneys to Guangzhou as “live seafood” cargo.

The news of Zhu’s arrest first broke during the 2014 World Transplant Congress at the end of July. “Sources of Organs for Transplantation in China” was designated by the recent 2014 World Transplant Congress as a “Poster of Distinction,” which the conference planning committee urged attendees to make a priority to read. Author David Matas is a renowned human rights lawyer and subject matter expert on the issue of organ harvesting. 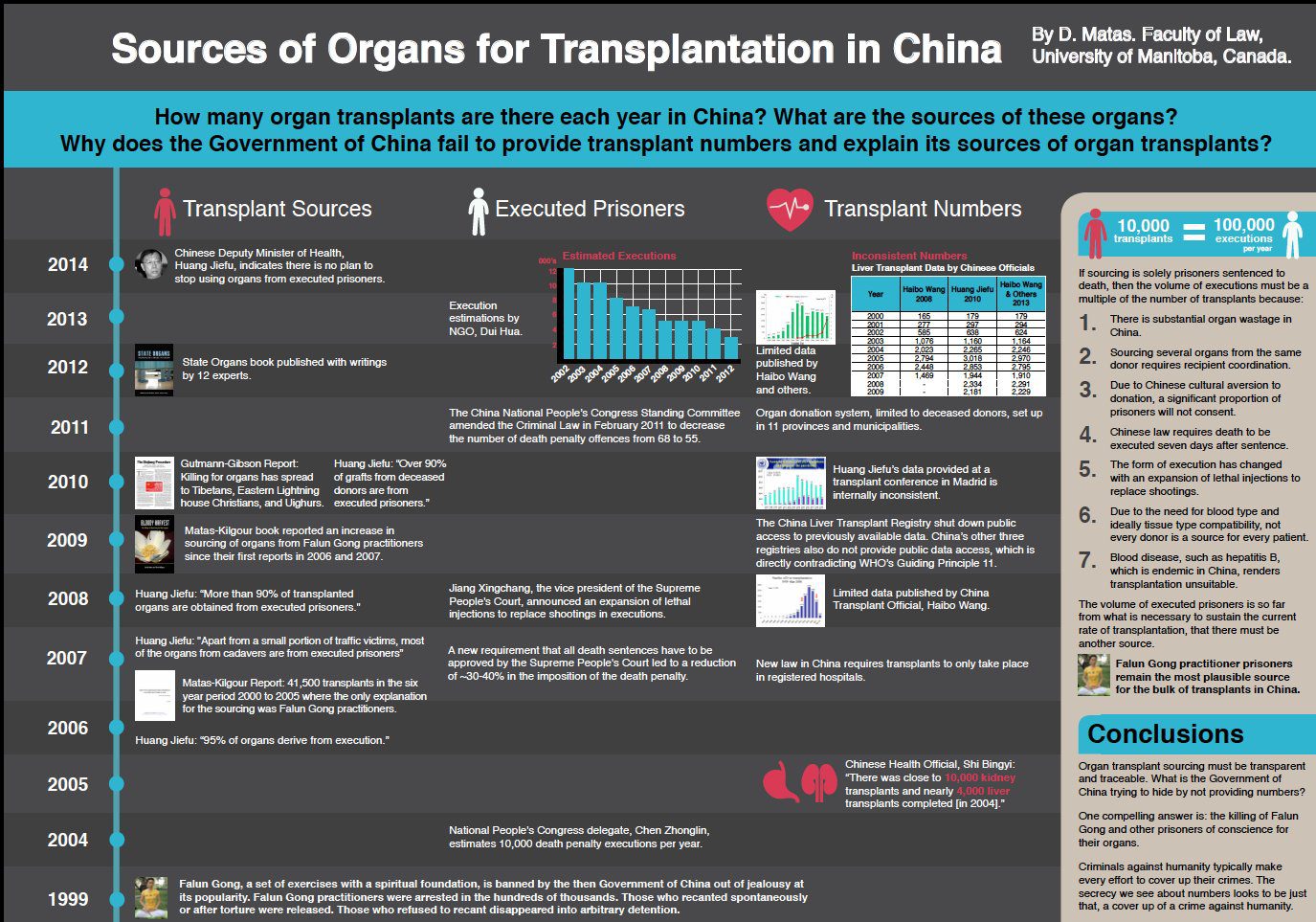 “Sources of Organs for Transplantation in China” Poster (Courtesy of Mr. David Matas)

Titled “Organ Procurement from Executed Prisoners in China”, this article also discusses the organ trade in China and organ procurement from executed prisoners (including both death-row convicts and prisoners of conscience). It argues that organ harvesting “represents a disturbing example of state-sanctioned illegal transplant activity” and recommends the international medical community “adopt a consistent approach toward the abhorrent practice of forced organ procurement and demand a complete and immediate cessation.”

Significant progress has been seen in medical societies. On May 31, the Medical Society of Virginia (MSV) passed a resolution to condemn the systematic, state-sanctioned organ harvesting in China and express its support for the pending House Resolution 281 in the U.S. Congress.