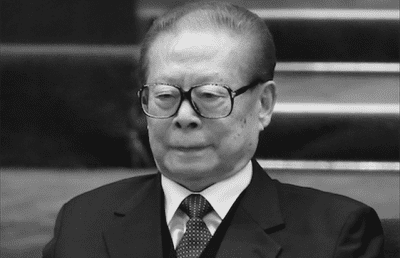 Jiang Zemin’s days are numbered. The man who dominated Chinese politics for more than two decades is now being investigated in his own backyard, the city of Shanghai.

That Communist Party leader Xi Jinping’s anti-corruption investigation team has set up shop in Shanghai has been widely reported. The tell that the investigation is proceeding in earnest appeared in a brief notice on Aug. 11 on the official website of the Shanghai Procuratorate, the department responsible for investigating and prosecuting crime.

The very successful businessman Wang Zongnan, the chairman of the Bright Food Group, was arrested for bribery and embezzlement. Those are the crimes that Wang will be tried for, but his real offense is his close connection to former Chinese Communist Party head Jiang Zemin, and Jiang’s son, Jiang Mianheng.

Shanghai was the launching pad for Jiang Zemin’s national political ambitions and has formed the base of his power.

Jiang served as the Party head of Shanghai from 1985 to 1989. Faced with a stubborn democracy movement in 1989, Deng was impressed with the heavy-handed way Jiang had dealt with the dissidents in Shanghai, while many other CCP leaders had stayed on the sidelines.

After removing General Secretary Zhao Ziyang from office because of his sympathy for the students, Deng brought Jiang Zemin to Beijing. Once in power, Jiang ruthlessly tracked down and punished dissidents who had escaped the tanks on the night of June 4.

After assuming control in Beijing, Jiang elevated formerly obscure cadres from Shanghai to positions of influence throughout the Party. They formed the core of a vast web of connections Jiang would use to dominate Chinese politics for more than 20 years.

Over the past 19 months, Chinese Communist Party head Xi Jinping, while carrying out a broad-based anti-corruption campaign, has taken down Jiang’s top allies.

The climax of this campaign appeared to be the announcement on July 29 of a formal investigation of the former security czar Zhou Yongkang. The thought that Zhou’s fall would mark the end of Xi’s purge of the Party was quickly dispelled.

Immediately after the announcement about Zhou, the CCP-mouthpiece People’s Daily published a commentary titled “Removing the Big Tiger Zhou Yongkang Is Not the End of the Anti-Corruption Movement.” The article pointed out that Zhou had to be appointed by higher ups. It is well known that Jiang Zemin promoted Zhou.

Although the article was quickly deleted, it stayed up just long enough for it to be copied and spread widely throughout the Chinese Internet.

Two weeks earlier, Epoch Times had reported that Jiang Zemin’s top advisor Zeng Qinghong was under arrest. If the anti-corruption campaign were to be something other than a mop-up operation, then the next logical target was Jiang Zemin himself. The other big tigers had all been taken down.

The arrest of Wang Zongnan last week makes Jiang look very vulnerable. If Jiang cannot protect the Shanghai-based Wang from arrest, then he has been stripped of power in his innermost citadel. Xi has an open field before him to pursue Jiang Zemin.

If past is prologue, then just as the Central Commission for Discipline Inspection has done in thousands of previous cases in other locales in China, it is now ranging across Shanghai, building a case by working from the outside in. The Commission attacks those who are weakest, on the periphery, lets those targets expose the connections they have closer to the center, and then proceeds step by step until the final objective is encircled and helpless.

According to the state-run Xinhua new agency, 85,000 officials have been investigated in the past 6 months.

Yet, in spite of the vast scope of this campaign, at a June 26 meeting of the Politburo Xi Jinping complained that the forces of corruption and anti-corruption were at a “stalemate.”

In spite of this dramatic move, Jiang’s faction appears to be continuing to resist.

Wu Fan, the editor-in-chief of the U.S.-based, Chinese-language magazine China Affairs, recently told NTDTV that the military continues to follow Guo Boxiong, one of the individuals, now retired, whom Jiang Zemin had appointed to run China’s armed forces.

The resistance by Guo fits a long pattern of the Jiang faction defying Party central.

For the ten years that Hu Jintao was the titular head of the CCP, there was a saying common in China, “an order never goes further than the gates of Zhongnanhai.” Zhongnanhai is the CCP’s headquarters and leadership compound in Beijing.

In order for Xi to know to be fully in charge, he needs to completely uproot the Jiang faction, which means taking down Jiang himself.

But Xi has an even stronger reason to pursue his campaign through to its conclusion: survival.

In his June 26 speech to the Politburo, Xi is reported to have said, “When it comes to struggling against corruption, life and death and reputation mean nothing to me.”

Xi learned before he was formally installed in the highest office in the Party that there were threats against his life. According to Party insiders, the discovery of a planned coup against Xi set in motion the campaign against Jiang Zemin and his faction.

After Chongqing’s police chief Wang Lijun sought asylum in the U.S. Consulate in Chengdu in February 2012, he was turned over to Beijing. Party central then learned that Zhou Yongkang and Bo Xilai, the charismatic former head of Chongqing whom Jiang had once wanted to make general secretary, intended to remove Xi soon after he took office.

The threats to Xi did not end with busting up that coup attempt. Epoch Times has reported that around the time of the Party leadership’s summer gathering at Beidaihe in 2013, Zhou Yongkang once attempted to assassinate Xi with a time bomb at a conference and on another occasion with a poisoned needle when Xi went to a hospital for a check up.

On Aug. 6 the U.S.-based Chinese-language World Journal reported widespread rumors in China’s military that Guo Boxiong was planning a coup.

While Western media have begun to take more seriously the life and death character of the struggle between Xi and Jiang, the standard accounts leave dark the motive involved. They simply assume that CCP politics are at all times deadly.

It is clear that if Xi were to show weakness toward his enemies, he would be lost. But why did Jiang Zemin need to take Xi as his mortal enemy?

The answer to this question lies in the media’s blind spot in reporting on China: the persecution of Falun Gong.

According to the press office for Falun Gong, the Falun Dafa Information Center, at any one time hundreds of thousands of Falun Gong practitioners have been detained since Jiang launched his campaign against them in July 1999.

That campaign has sought to uproot a traditional Chinese spiritual discipline that was practiced by 100 million Chinese in 1999, according to press reports at the time. It has thus set the regime at war against the conscience of one in 13 Chinese, treating as criminal their attempt to live according to the discipline’s principles of truthfulness, compassion, and tolerance.

The practitioners detained by the regime have typically suffered torture and brainwashing. According to the Falun Gong website Minghui.org, 3,776 deaths from torture and abuse have been confirmed. Because of the difficulty of getting information out of China, the true number of such deaths is assumed to be several times higher.

In addition, practitioners have been targeted for forced organ harvesting. In 2011 the researchers David Kilgour and David Matas, the authors of the book “Bloody Harvest” investigating forced organ harvesting, and the investigative journalist Ethan Gutmann, the author of “The Slaughter: Mass Killings, Organ Harvesting, and China’s Secret Solution to Its Dissident Problem,” estimated that in the years 2000-2008 62,000 practitioners had been killed for their organs. That number is now likely to be tens of thousands higher.

Jiang Zemin and his faction fear Xi Jinping because he is not implicated in these crimes against humanity. There is the possibility that Xi could end the persecution. If he did so, the calls in China for holding those responsible would be overwhelming.

In order to avoid being held accountable, Jiang’s faction has sought by any means possible to regain power, which has meant trying to remove Xi.

Xi was not the first CCP leader to use charges of corruption to strike at his enemies, but in the case of the Jiang faction, this charge of corruption is more than a pretext. It targets a system of ruling.

Jiang Zemin is considered in China to be a buffoon, yet he managed to make himself the most powerful man in China for over 20 years. By enabling corruption at every level of the Party, Jiang bought the loyalty he could not inspire.

Commentators on Xi’s campaign often write about this corruption as though it were simply the way things are in the CCP. In doing so, they miss the gargantuan scale of Jiang’s corruption, which goes far beyond anything seen before.

The commentators also often write rather bloodlessly, missing the urgency this issue has for the Chinese people.

When the Chinese people think about corruption, they don’t think first of all about gleaming Audis whizzing through the streets or pampered mistresses or extravagant meals.

They remember how the labor camp system was almost phased out before Jiang, and how under him it swelled to unprecedented size.

They see the “stability maintenance system”—developed by Zhou Yongkang for use against Falun Gong practitioners—turned on those who protest having their farms and homes stolen from them.

The Chinese people also see a society without ethical moorings. They pass one horror story after another around on the Internet and ask themselves, how low can the moral life of their nation sink?

In these and an infinite number of other ways, Xi’s assault on corruption promises the Chinese people relief from their sorest grievances.

The greatest symbol of vanquishing this rule by corruption will be taking down Jiang Zemin himself.

When the Party’s cadres see that Jiang Zemin is under Xi’s control, the web of influence Jiang spun around China will begin to dissolve.

Xi’s campaign will end an era, but a path to the future remains unclear.