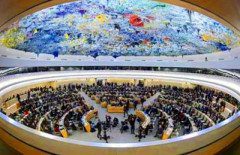 The Chinese regime’s macabre practice of killing Falun Gong practitioners for their organs was raised before the United Nations Human Rights Council in Geneva recently by the Vancouver-based Lawyer’s Rights Watch Canada.

She also noted that China prohibits lawyers from defending Falun Gong practitioners, and courts from accepting lawsuits on their behalf.

Gao, who has been referred to as “China’s conscience,” was arrested, harassed, and tortured from 2005 onwards after defending persecuted practitioners of Falun Gong, a traditional spiritual discipline, and other groups targeted by the Chinese regime.

Since Falun Gong was outlawed by the Chinese regime in 1999, practitioners have often been subjected to various forms of torture and brainwashing in an attempt to “transform” them.

Selvarajah also brought up during her talk that Washington, D.C.-based Doctors Against Forced Organ Harvesting delivered a 1.5-million-signature petition to the High Commissioner for Human Rights last year calling for end to and an investigation of China’s “slaughter of prisoners of conscience for organ procurement.”

During a UNHRC session in mid-March, Canada formally acknowledged reports that China is engaged in organ harvesting without consent.

“We remain concerned that Falun Gong practitioners and other religious worshippers in China face persecution, and reports that organ transplants take place without free and informed consent of the donor are troubling,” Anne-Tamara Lorre, Canada’s human rights adviser at the U.N., said during that session.

Selvarajah said in her remarks that the UNHCR should be “gravely concerned” about the case of Cao Shunli, a Chinese democracy activist who was arrested last September as she was leaving Beijing to fly to Geneva to attend meetings in preparation for China’s Universal Periodic Review at the U.N. She was refused medical treatment in prison and eventually died on March 14.

Cao’s case was also mentioned by some U.N. member states and other NGOs.

A representative of the International Service for Human Rights called for a moment of silence to remember Cao during his address to the UNHRC. However, the moment of silence was interrupted after an objection by China, which argued that NGO speakers are not allowed to be silent during their allocated time.

China’s delegation at the UNHRC, backed up by some other member states, often attempts to derail talks by NGOs critical of its human rights record. Last year, the Chinese delegation repeatedly tried to interrupt a speech by researcher Chen Shizhong on China’s persecution of Falun Gong.