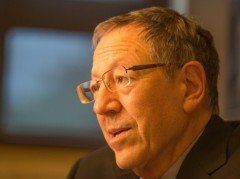 PARLIAMENT HILL, Ottawa—Liberal MP Irwin Cotler has introduced a bill to crackdown on those who trade in human organs, take part in organ harvesting, or get a transplant without making sure the organs were willingly donated.

With the relative ease of organ transplants, a new and gruesome trade has arisen around the life-and-death operations and organs that make them possible.

It’s a brave new world, without regulation and very little oversight outside of the professional associations of surgeons and transplant professionals that have begun addressing the issue. But while the medical community has started to face this new reality, most governments have not. It’s a situation Cotler’s bill aims at addressing for Canadians.

The bill has several components. One part criminalizes organ harvesting done without consent or for financial payment. Another part amends the immigration laws so people involved in such activities cannot enter Canada. And a third part requires organ recipients to make sure their transplanted organs came from willing donors.

While there are no reports of forced organ harvesting happening in Canada, Canadians have travelled overseas to receive organs, some in countries like China where forced organ removal is a serious problem.

The bill aims to make sure that never happens again, and that any Canadians that do partake in “transplant tourism,” prove that their transplant was ethical.

There are also instances where people are trafficked for the purpose of organ harvesting, another practice Cotler hopes to address.

Those provisions were inspired by news this fall that children were being trafficked to the UK so their organs could be harvested.

“The evidence of organ harvesting and individuals trafficked for this purpose is as horrifying as it is shocking—we must ensure that Canada has the tools to prosecute individuals who engage in or facilitate the practice,” said Cotler.

Cotler says his bill was inspired by the work of human rights lawyer David Matas and former MP and Secretary of State for Asia Pacific David Kilgour, whose extensive investigation of organ harvesting in China of Falun Gong adherents set off an international reaction.

“We cannot alone change abhorrent practices in other countries, but we can ensure that Canada is in no way complicit with this most fundamental violation of human rights,” said Cotler.

Cotler said he introduced the bill as part of a long-term effort to end the oppression of Falun Gong, something he started working on 15 years ago and has continued since, exempting his time as Minister of Justice in Paul Martin’s Liberal government from 2003 to 2006.

At that point he had asked his friend, David Matas to take over. Matas and Kilgour wrote a groundbreaking report that came to the disturbing conclusion that prisoners of conscience in China were being murdered for their organs.

The Slaughter, an upcoming book by investigative journalist Ethan Gutmann documents the history of organ harvesting in China, including its beginnings in Xinjiang where Uyghur Muslims were executed and harvested.

Cotler said the situation in China and elsewhere is something that needs to be addressed urgently.

“We need to do something. We may not be able to change what’s happening in China. But we can enact legislation to ensure that Canadians do not in any way participate in any form of illegal organ harvesting.”

Cotler said he learned in the course of preparing the bill that even though the primary perpetrator of organ harvesting is the Chinese regime and the primary victims are Falun Gong adherents, many others are affected.

Because of that, his legislation is broad enough to prohibit any involvement in organ harvesting by any Canadian without the donors consent, or where organs are bought or sold.

“That’s the purpose of the legislation—to prevent and deter organ harvesting.”

It would require government support for the bill to pass, and Cotler said he hopes his non-partisan approach to the issue might attract support from all sides of the House of Commons.

At the very least, he hopes the bill will attract wider attention to the issue, particularly the plight of Falun Gong adherents in China.

That attention could deter the regime from continuing on with the practice, and perhaps others involved in similar atrocities.