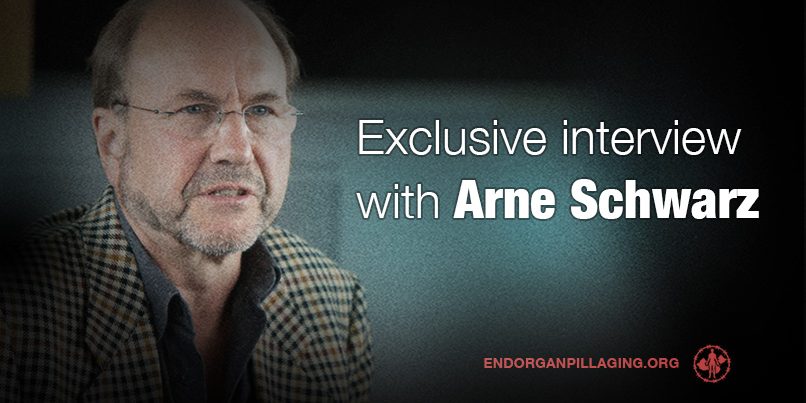 German analyst, Arne Schwarz, has explored unethical organ harvesting practices. As co-author of the book, STATE ORGANS: Transplant Abuse in China, Schwarz has been widely recognized and awarded for revealing Swiss pharmaceutical giant Roche’s involvement in unethical clinical trials in China. His work is noted throughout the medical literature concerning the implications of western pharmaceutical companies in illegal and unethical transplant practices.

“Ethical credibility of the international Transplantation Society is at stake if no action is taken to stop this.”

––Arne Schwarz at a forum held during the 24th Transplant Congress in Berlin, 2012

DAFOH: What motivated you to devote your time to research and analysis of unethical organ harvesting practices?

ARNE SCHWARZ: Well, who knows all of his own motivations? But, three appalling experiences motivated me the most. The first shock happened when I witnessed, while traveling in China, how a woman lost her job and had to flee from the police only because she had admitted to colleagues that she practiced Falun Gong meditation exercises. I later heard about the allegations that the organs of detained innocent Falun Gong practitioners were being harvested for transplantation. I could not believe this, and checked all of the evidence that was presented and was shocked to find it highly trustworthy.

Now, I expected western transplant surgeons, pharmaceutical companies, politicians and journalists to denounce and oppose this crime against humanity and was shocked that it was widely ignored or disputed, and even indirectly supported by collaborations with the unethical Chinese transplant system. I felt motivated to contribute, with my own research, to stopping this crime against humanity. It reminded me of the medical atrocities in Nazi Germany.

DAFOH: What are your impressions and insights of the development of China’s announcements concerning transplant medicine over the years?

ARNE SCHWARZ: For more than 20 years there were no “announcements” at all. But, all allegations of unethical organ harvesting had been flatly denied by China, although basically tens of thousands of transplanted organs have been harvested from prisoners. This eventually had to be admitted by the government.

In November 2013, the end of organ harvesting from prisoners was announced and set for June 2014. In March 2014 this announcement was revoked and an integration of prisoners’ organs into a system meant for citizen’s voluntary organ donations was announced instead. After heavy international criticism, in December 2014, the end of organ harvesting from prisoners by Jan 1, 2015 was announced. But still, in 2015 it was claimed that prisoners would now have a “right to donate their organs voluntarily.”

DAFOH: Former Chinese vice minister of health and current head of the Organ Transplantation Committee, Huang Jiefu, is appearing in global media as the unofficial mouthpiece announcing changes in China. What are your observations about the reliability of his announcements?

ARNE SCHWARZ: Huang Jiefu is very well informed about the level of international criticism over the unethical Chinese transplant system, largely due to his friendship with U.S. transplant surgeons Francis Delmonico, Michel Millis, and others. Huang’s announcements aim mostly at silencing or appeasing the international criticism while leaving a backdoor to slip through on the organ harvesting from prisoners. This has happened so often that his announcements cannot be considered reliable.

DAFOH: In December, 2014, Huang announced that China would end the organ harvesting from executed prisoners in 2015. But he also indicated that prisoners are now considered citizens and that they have the right to donate their organs, an interpretation of the status of prisoners that is not shared by the international community.

Some researchers are wary of this updated promise, saying that it is virtually impossible to independently verify these claims, given the lack of transparency of the Chinese transplant system, contradictory explanations of organ sourcing by Huang, and a lack of clarity about whether military hospitals are also subject to the new rules. Can we trust this announcement?

ARNE SCHWARZ: Huang has deceived the public for 15 years, again and again. Why should we trust him now? Huang also claimed that China now complies with the World Health Organization’s, (WHO), guiding principles for organ transplantation. But, this claim is also deceptive. The WHO guidelines demand that organ donation and transplantation must be transparent and open to scrutiny. The Chinese transplant system is not yet transparent or open to critical observation. We should not trust Huang Jiefu now, but like the other international transplant systems, demand that the Chinese transplant system be made transparent and open to scrutiny before granting cooperation.

DAFOH: On April 21, 2015, at a workshop about organ harvesting in China held by the European Parliament in Brussels, Belgium, a letter from the Ambassador of China to the European Union was presented. What does the letter state?

ARNE SCHWARZ: Basically, the Ambassador’s letter claims that China has ceased using organs from executed prisoners for transplantation since January 1, 2015, and that the organ harvesting from live Falun Gong practitioners is a fabrication. But, the Ambassador did not substantiate his claims. Questions about this letter could not be asked at the time because Chinese representatives did not show up at the workshop.

DAFOH: The Ambassador’s letter is only a statement of the position of the embassy, and not a binding law. Does the letter refer to a law? What would make you believe that it is now “Against the law” in China to use organs from prisoners?

ARNE SCHWARZ: The letter did not refer to a law-making organ harvesting from prisoners illegal, but simply claimed it would not happen any longer. It would be “Against the law of China” only if the National People’s Congress or the State Council officially banned the transplantation of organs from all kinds of prisoners and people in custody, promulgating a law making this illegal.

DAFOH: Former president of The Transplantation Society, Dr. Francis L. Delmonico stated, “It will now be against the law for someone to have an organ used from an executed prisoner.” Is the euphoria that “It is now against the law” premature?

ARNE SCHWARZ: So far, no “Law of China” against organ harvesting from prisoners exists. When I asked Dr. Delmonico by email which law he was referring to, he could not tell me. So, his statement misled the participants at the workshop and the public. Any euphoria over this is definitely premature as long as there is no law making organ harvesting from prisoners illegal, and organ donation and transplantation is not transparent and open to scrutiny.

DAFOH: Do we have any hints that the organ harvesting from prisoners of conscience will end?

ARNE SCHWARZ: I am not sure if this is really an indication that organ harvesting from prisoners of conscience will end soon. The search for scapegoats for this crime against humanity has already started.

In April, Huang Jiefu publicly blamed Zhou Yongkang, who, after Jiang Zemin, is one of the worst perpetrators of the persecuted traditional spiritual group of Falun Gong, of having covered up unethical organ harvesting in the past. A retired senior leader of the CPC, Zhou was a member of the 17th Politburo Standing Committee, China’s highest decision-making body, and the Secretary of the Central Political and Legal Affairs Commission between 2007 and 2012. In that position, Zhou oversaw China’s security apparatus and law enforcement institutions, with power stretching into courts, prosecution agencies, police forces, paramilitary forces, and intelligence organs.

Huang also blamed those surgeons who procured organs from prisoners, while exculpating those surgeons who implanted these organs, having done this himself many hundreds of times as a transplant specialist. I wonder how the International Transplant Society will judge this new distinction between bad and good transplant surgeons.

DAFOH: Interim provisions in 1984 permitted organ harvesting from executed prisoners in China, and there is a law that specifically prohibits transplants for transplant tourists. China also has constitutional laws that protect the practice of spiritual beliefs. It appears that the presence or absence of laws in China does not matter, and the execution of the laws is inconsistent and not enforced. Is scrutiny needed?

ARNE SCHWARZ: Transparency and scrutiny are urgently needed. Not only for ongoing transplantations, but also for the allegations of organ harvesting from prisoners of conscience over the past 20 years. Such crimes against humanity have to be investigated and those being responsible for them have to be punished. This is now demanded in a recent resolution by the European Parliament.

DAFOH: Can we be optimistic that the organ harvesting crisis in China will end without enforcing scrutiny and transparency?

ARNE SCHWARZ: Considering the many lies, delusions, semantic tricks and unfulfilled announcements in the past 30 years of organ transplantation in China, it would not be optimistic, but, naïve to believe things will change without scrutiny and transparency. The ethical credibility of the International Transplantation Society, and other responsible organizations, is at stake if they do not insist on the implementation of the ethical guiding principles before deciding to cooperate with the transplant medicine plans of the Chinese regime.

DAFOH is founded and organized by medical doctors of various specialties from all over the world. Full membership is intended for medical doctors and medical professionals who recognize the necessity to stop the practices of illegal organ harvesting and will be granted after approval. Non-medical professionals can sign in as supporters.
Categories: News Reports, UncategorizedBy International Coalition to End Organ Pillaging in ChinaMay 12, 2015
Tags: ARNE SCHWARZccpChinaChinese governmentChinese peopleDAFOHDoctors Against Forced Organ HarvestingHuang JiefuJiang ZeminOrgan Transplantation CommitteeWHOWorld Health Organization