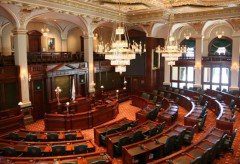 The House of Representatives of the state of Illinois passed a resolution in late February that called on the U.S. government to investigative the source of tens of thousands of organ transplants in China, many of them thought to have come from practitioners of Falun Gong who were murdered expressly for the purpose.

The legislature called the practice “revolting” and asked President Obamato “take all reasonable steps” to bring an end to it.

It also described the practice of Falun Gong, the circumstances of its persecution, and the state of human rights in China broadly.

Reports and evidence that practitioners of Falun Gong were harvested for their organs in China emerged starting in 2006. In that year a Canadian human rights attorney, David Matas, and a former parliamentarian, David Kilgour, published a reporting indicating that around 41,500 organs are suspected to have come from Falun Gong victims from 2000 to 2005.

That estimate was brought to roughly 65,000 between the years 2000 and 2008, according to the work of Ethan Gutmann, an investigative journalist who is writing a book on the topic.

Falun Gong is a Chinese spiritual discipline that gained more than 70 million followers in China in the 1990s before suffering a brutal persecution at the hands of former Communist Party leader Jiang Zemin. The campaign continues to this day.

Howard Feng, a local Falun Gong spokesperson in Illinois, who helped the HR070 Bill through the legislature, said that Falun Gong practitioners in the state was gratified with the support.

“There were a lot of constituents that signed petitions on organ harvesting,” Feng said in a telephone interview. “We showed the representatives all the signatures, and they thought ‘Oh, so many constituents support this, so we better support it.’”

Falun Gong practitioners in Illinois had gone to the streets with clipboards to collect the signatures. Americans that encountered the news of systematized, mass organ harvesting from religious believers in China were horrified, Feng said.