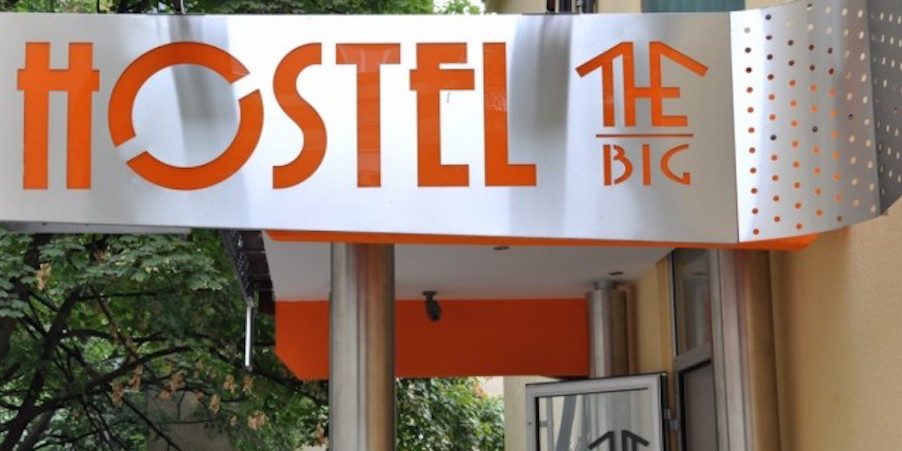 BY EPOCH TIMES / Photo: Entrance of the hostel where were protesters detained by Serbian police. (The Big Hostel)

Traveling to the CEE-China Summit in Belgrade to rase awareness of the ongoing organ harvesting issue in China; nine human rights protesters were illegally detained in Belgrade, Serbia, yesterday evening just before the summit between Central and Eastern Europe (CEE) countries and China.

According to unofficial information from the Bulgarian embassy, protesters are provisionally detained outside Belgrade. The detainees themselves told Epoch Times before their mobile phones were removed, that they were taken away by the Serbian police to an unknown location outside of Belgrade, late yesterday evening. The police had detained them at the hostel where they were staying, and banned the protest.

They were taken away by the Serbian police to an unknown location outside of Belgrade, late yesterday evening.

An organizer of the protest stated that such a prohibition must be justified by Serbian law, but he did not believe the ban contained any justification.

The protest was planned to coincide with the to CEE-China summit to be held in Belgrade on December 16 and 17. It is the third summit whereby 16 leaders from ex-communist countries in Central and Eastern Europe and communist China meet.

The protesters are facing deportation from the country, although it was not stated whether or not they had breached any laws of the Serbian legal system.

On December 12, 2013, the European Parliament adopted an urgency resolution on systematic, state-sanctioned organ harvesting from prisoners of conscience taking place in China, including large numbers of Falun Gong practitioners imprisoned for their religious beliefs, and the European Parliament calls for EU Member States to raise the issue of organ harvesting in China; publicly condemn organ transplant abuses in China, and call for the prosecution of those found to have engaged in such unethical practice.

– having regard to the Charter of Fundamental Rights of the European Union of 18 December 2012, in particular Article 3 thereof on the right to the integrity of the person,

– having regard to the hearings of 21 November 2009, 6 December 2012 and 2 December 2013 by the Subcommittee on Human Rights and to the respective testimonies of former Canadian Secretary of State for Asia-Pacific David Kilgour and human rights lawyer David Matas on the large-scale organ harvesting carried out on unwilling Falun Gong practitioners in China since 2000,

– having regard to the Convention against Torture and Other Cruel, Inhuman or Degrading Treatment or Punishment, ratified by China on 4 October 1988,

A. whereas the People’s Republic of China performs more than 10 000 organ transplants per year and 165 Chinese organ transplant centres advertise that matching organs can be found within two to four weeks, yet as things stand China does not have an organised or effective public system of organ donation or distribution; whereas the organ transplant system in China does not comply with the World Health Organisation’s requirements for transparency and traceability in organ procurement pathways, and whereas the Chinese Government has resisted independent scrutiny of the system; whereas voluntary and informed consent is a precondition for ethical organ donation;

B. whereas the People’s Republic of China has extremely low rates of voluntary organ donation owing to traditional beliefs; whereas in 1984 China implemented regulations that permitted the harvesting of organs from executed prisoners;

C. whereas the Government of the People’s Republic of China has failed to account adequately for the sources of excess organs when information has been requested by the former United Nations Special Rapporteur on torture and other cruel, inhuman or degrading treatment or punishment, Manfred Nowak, and by Canadian researchers David Matas, a human rights attorney, and David Kilgour, the former Canadian Secretary of State for Asia-Pacific;

D. whereas Huang Jiefu, Director of the China Organ Donation Committee and former Vice-Minister of Health, stated at the Madrid Conference on Organ Donation and Transplantation in 2010 that over 90 % of transplant organs extracted from deceased donors came from prisoners executed in China, and has said that by mid-2014 all hospitals licensed for organ transplants will be required to stop using organs from executed prisoners and only to use those voluntarily donated and allocated through a fledgling national system;

E. whereas the People’s Republic of China has announced its intention of phasing out the harvesting of organs from executed prisoners by 2015, as well as the introduction of a computerised organ allocation system known as the China Organ Transplant Response System (COTRS), thereby contradicting its commitment to the effect that all hospitals licensed for organ transplants will be required to stop using organs from executed prisoners by mid-2014;

F. whereas in July 1999 the Chinese Communist Party launched an intensive nationwide wave of persecution, designed to eradicate the spiritual practice of Falun Gong and leading to the arrest and detention of hundreds of thousands of Falun Gong practitioners; whereas there are reports that Uyghur and Tibetan prisoners have also been subjected to forced organ transplants;

G. whereas the UN Committee Against Torture and the UN Special Rapporteur on torture and other cruel, inhuman or degrading treatment or punishment have expressed concern over the allegations of organ harvesting from prisoners, and have called on the Government of the People’s Republic of China to increase the accountability and transparency of the organ transplant system and punish those responsible for abuses; whereas the killing of religious or political prisoners for the purpose of selling their organs for transplant is an egregious and intolerable violation of the fundamental right to life;

H. whereas on 12 November 2013 the UN General Assembly elected China to serve on the UN Human Rights Council for a period of three years beginning on 1 January 2014;

1. Expresses its deep concern over the persistent and credible reports of systematic, state-sanctioned organ harvesting from non-consenting prisoners of conscience in the People’s Republic of China, including from large numbers of Falun Gong practitioners imprisoned for their religious beliefs, as well as from members of other religious and ethnic minority groups;

2. Stresses that phasing out the harvesting of organs from executed prisoners only by 2015 is not acceptable; calls on the Government of the People’s Republic of China to end immediately the practice of harvesting organs from prisoners of conscience and members of religious and ethnic minority groups;

3. Calls for the EU and its Member States to raise the issue of organ harvesting in China; recommends that the Union and its Member States publicly condemn organ transplant abuses in China and raise awareness of this issue among their citizens travelling to China; calls for a full and transparent investigation by the EU into organ transplant practices in China, and for the prosecution of those found to have engaged in such unethical practices;

4. Calls on the Chinese authorities to respond thoroughly to the requests of the UN Special Rapporteur on torture and other cruel, inhuman or degrading treatment or punishment and the UN Special Rapporteur on freedom of religion or belief asking the Chinese Government to explain the sources of extra organs following the increase in the number of organ transplant operations, and to allow them to conduct an investigation into organ transplant practices in China;

5. Calls for the immediate release of all prisoners of conscience in China, including Falun Gong practitioners;

6. Instructs its President to forward this resolution to the Council, the Commission, the Vice-President of the Commission / High Representative of the Union for Foreign Affairs and Security Policy, the EU Special Representative for Human Rights, the United Nations Secretary-General, the United Nations Human Rights Council, the Government of the People’s Republic of China and the Chinese National People’s Congress.