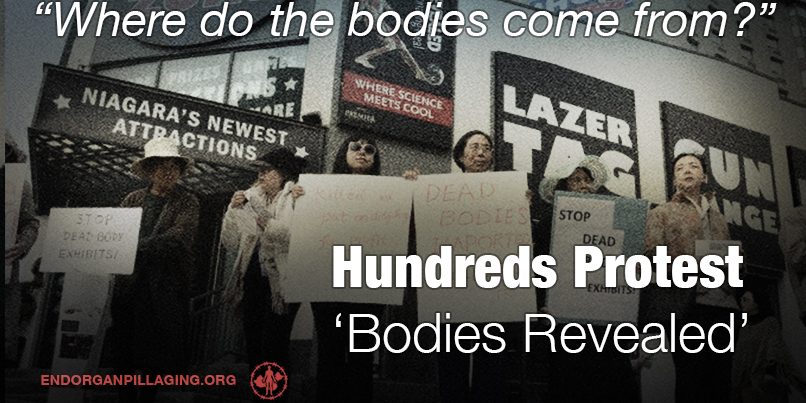 NIAGARA FALLS, Ont.—It was two-for-one to see Premier Exhibitions’ skinned and plasticized corpses in Niagara Falls on April 17, but two security guards at the doors were vetting who could get in.

That’s because in the street outside around 250 people gathered to call for Bodies Revealed, Premier’s latest plasticized corpse exhibit, to be shut down.

That message and variations of it speak to the central question surrounding the exhibit. Where do the bodies come from?

A car with two young women stopped to ask some of the protesters why they were there.

‘The bodies inside, we don’t know where they come from. Chinese people, prisoners of conscience, disappear in Chinese prisons, many never come out. Tens of thousands,’ explained a protester.

Attempts to reach someone inside the exhibit were rebuffed by the security guards. They provided a phone number for Kate Whitely, a spokesperson with Kirvin Doak Communications, the company that handles Premier’s PR.

Premier says in an FAQ on its website that the bodies came from people who lived in China and died of natural causes. A disclaimer on a different page hedges that, however, saying the bodies were originally received by the Chinese Bureau of Police.

“Premier cannot independently verify that the human remains you are viewing are not those of persons who were incarcerated in Chinese prisons,” reads the disclaimer

“Premier relies solely on the representations of its Chinese partners and cannot independently verify that they do not belong to persons executed while incarcerated in Chinese prisons.”

We have credible allegations that the bodies on display may have been the bodies of human rights [activists] who were murdered by the authorities for their political or spiritual beliefs.

When asked to clarify how Premier could say its corpses came from people who died from natural causes while also saying they cannot verify if they were executed, Whiteley emailed the following:

“Premier’s suppliers have certified that the specimens presented in its exhibitions have been donated by the deceased or their authorized family member for educational purposes.”

“There has never been any evidence tying the specimens in Premier’s exhibitions to unlawful or inhumane acts. Each of the specimens exhibited in Premier’s exhibitions have been examined by a retired anatomy professor and a biological anthropologist in the United States, and they have never found any evidence of trauma associated with bodily injury or abuse.”

A follow-up question as to the actual suppliers and whether they were in fact Chinese police was not answered. For the protesters gathered outside the exhibit, this is a critical question.

Jack MacLaren, a Progressive Conservative Member of Ontario’s Provincial Parliament, says the disclaimer amounts to an admission of guilt. He’s concerned that the bodies are sourced from Chinese dissidents. The factory that plasticizes many of the corpses displayed in exhibits like Premier’s is linked to public security staff tied to the murder and organ harvesting of Chinese prisoners of conscience.

The technique of plastination was pioneered in China in the 1990s by German impresario Gunther von Hagens, who found that Dalian city was particularly accommodating to his work under then-mayor Bo Xilai. Bo was promoted under former leader Jiang Zemin for his loyalty—a loyalty that Bo’s critics say he demonstrated by zealously participating in Jiang’s crackdown on the Falun Gong meditation group. Dalian was known for imprisoning and killing Falun Gong adherents.

MacLaren worries that some of the 100 skinned bodies in the Bodies Revealed exhibit are people killed because of their spiritual or political beliefs.

International concern over organ harvesting from Chinese prisoners has intensified in recent years. At first the regime denied that it sourced organs for transplantation from executed prisoners, but later admitted executed prisoners were the main source of organs. The regime then promised to stop sourcing organs from prisoners, only to later reverse that position.

Most recently, a senior cadre blamed the former Public Security Czar Zhou Yongkang, another Jiang ally, for the practice of organ harvesting.

The regime has never addressed allegations of forced organ harvesting from prisoners of conscience.

MacLaren says it needs to stop. “It’s a heinous activity that is going on.”

Premier bills the show as an educational exhibit. MacLaren said any educational value that comes from it is negated by the question of consent and the sourcing of the bodies.

Sanderson Layng, president of the Canadian Centre for Abuse Awareness, says if the exhibit is indeed educational, it’s not a positive lesson.

“What it’s teaching is that human life has no value.”

He hopes the people paying money to see the exhibit are not aware of the controversy surrounding it. If they are, he suggested they are knowingly supporting an exploitive business that may be adding indignity to murder.

The protesters want the Canadian Border Services Agency to investigate the source of the bodies and are calling on the federal government to ban further imports of these types of corpses.

McLaren said he will talk to his colleagues in Queen’s Park (Ontario’s legislature) one-on-one to build support to shut down this and similar exhibits. He notes that Hawaii, France, New York City, and Israel are among the jurisdictions that have already banned it.

Lawyer Joel Etienne, who spoke at the protest, said there is no country in the world that tolerates the desecration of their citizens’ remains after death.

“Except for the Romans and Nazis, which governments to your knowledge propose to continue shaming a person and their family after the execution of a prisoner by exhibiting human remains in a carnival setting?” he said.

“What makes things worse in this instance is that we have credible allegations that the bodies on display may have been the bodies of human rights [activists] who were murdered by the authorities for their political or spiritual beliefs.”