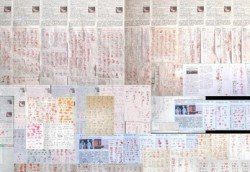 As the rest of the world has learned about the Chinese Communist Party’s (CCP’s) crime of harvesting organs from living Falun Gong practitioners, so have the citizens of China. They have expressed shock and dismay at what the CCP is capable of.

Local citizens from Tangshan City in Hebei Province, Tianjin City, Qinhuangdao, Zhangjiakou City, and others have signed petitions protesting this brutal practice. They have also demanded an investigation into the crimes of Bo Xilai and Zhou Yongkang for participating in this crime.

The horror is so hard for people to believe that local citizens are beginning to see through the lies of the Chinese government. They have begun to express their heartfelt feelings, saying, “How can people be this evil?”

When they sign the petition, some even add comments.

After a 60-year-old man heard about the live organ harvesting from Falun Gong practitioners, he said, “It frightens me just to hear about it. For the CCP to do such a thing is truly evil. Now everyone says that Heaven will eliminate the CCP. I wish it would have happened sooner.”

An 80-year-old man said that he believed in Falun Gong and often got to readtruth-clarification materials. He had a hard time understanding the fact that practitioners, especially female practitioners, were subjected to cruel torture by the CCP. When he heard about the live organ harvesting, he was more shocked and said, “This is truly evil. I couldn’t even imagine it.”

A practitioner visiting a patient in a hospital gave a man in his 30s a Shen Yun Performing Arts DVD. At the hospital a few days later, he saw this man again. The man said, “The other day, I overheard two people talking about live organ harvesting. They were asking for signatures for their petitions. What was that all about?” The practitioner told him how the CCP harvests practitioners’ organs while they are still alive and sells them to be used in organ transplants. They then sell their bodies to be used for exhibitions. The man held up his hand and said, ” Stop. I will sign it!”

When a man in his 60s who makes ends meet by picking up wood, heard that a Falun Gong practitioner was hoping to get his signature to protest the brutality of the CCP, he was also asked if he was afraid. He said, “I will sign it for you. What am I afraid of! I totally agree with what Falun Gong practitioners say.”

After a female caretaker saw the petition, she said, “I will sign for you. What am I afraid of? Are we breaking the law by supporting this cause? The CCP has been telling us to fight corruption every day – is there anyone who is not corrupt these days? Whatever you Falun Gong need help with, I will help you.”

When a practitioner talked to another elderly person in the supermarket about the live organ harvesting, the man was very upset. He said, “How can this be? The CCP is too evil, I will sign it for you!” The man beside him also asked him to sign it. He said, “I will sign it. This society is so rotten!”

A woman in the village heard that the CCP was harvesting practitioners’ organs and was so shocked that she said right away, “I will sign it! This is horrible!”

Another person chased after a practitioner and asked, “I have signed once – the CCP is so evil, I want to sign it again. Can you please let me do it?”

“I am a citizen of China, and I am signing the petition on behalf of my mother who is 83 years old. We appeal for an end to the persecution of Falun Gong.

“For over a decade, I have witnessed the CCP’s systematic bloody suppression, persecution, and massacre of Falun Gong practitioners, which is beyond imagination. This is a deed so evil that even the devil would not do it. It humiliates the Chinese people. I hope by signing the petition, some people will wake up and regain their conscience. Let us work together to pursue a future free of communism!”