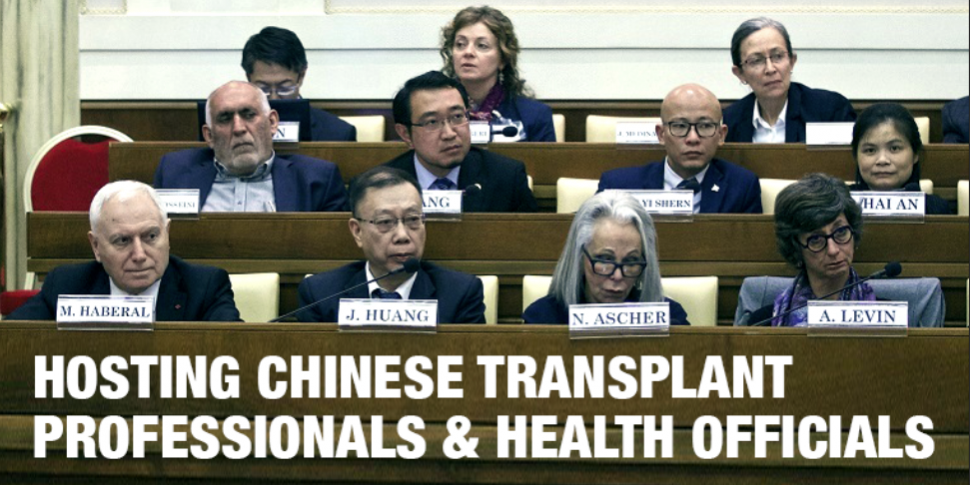 Chinese transplant professionals and health officials have made an effort to be engaged in international transplant events. Chinese government spokesman Huang Jiefu and others were active participants in The Transplantation Society Congress in Hong Kong in August 2016 and the Vatican sponsored Pontifical Academy of Sciences summit on organ trafficking and transplant tourism in February 2017.

The official Chinese delegation took advantage of their presence to deny the evidence of ongoing organ transplant abuse. They were provided settings where they did not have to confront and answer the evidence they denied.

Many people objected to this one sided hosting. Those objections generated a sequence of justifications from the hosts or their defenders. In what follows, I give my own, personal responses to these justifications.

The organizers intended for the events to be academic exercises. Huang Jiefu and other invited Chinese health officials and transplant professionals were making academic presentations of current data and experience.

The Communist Party is engaged actively in whitewashing, seeking to wash its hands of the blood of innocents by attempting to dupe the gullible abroad. Huang Jiefu has a long history of developing and parroting Communist Party propaganda as well as contradicting himself over the years as the propaganda of the Party has shifted and his own views have changed about what sounds best at the time. The fact that he has at times been actively involved in the formulation of this propaganda does not make his work academic. An analysis of his discourse I have written can be found at this link: endorganpillaging.org/organ-sourcing-in-china-the-official-version

I and other organ transplant abuse researchers are repeating contentious political assertions.

The suggestion that a Communist government spokesperson, such as Huang Jiefu, is an academic and that those who have done serious academic research are doing nothing more than making political assertions is a denial of reality. The academic nature of the work that I and others have done has been demonstrated by the acceptance of our presentations at a wide variety of academic conferences after peer review of abstracts as well as publications and university invited lectures.
The claim that our work is politically motivated echoes Communist Party propaganda. The Communists too like to say that the criticism of their organ transplant abuse is politically driven, by Falun Gong.

Falun Gong practitioners, to be sure, oppose human rights violations directed against them in China. Yet, human rights are not political. They are universal.

Those concerned about the killing of prisoners of conscience for their organ in China have participated in political events on the condemnation of China such as the European Parliament and June 2016 US Congressional Hearing.

There are, of course, some politicians, albeit far too few, interested in the independent research I and others have done on organ transplant abuse in China. That interest, however, does not make our work political.

The Chinese officials and professionals invited to participate in international events are those who are trying to reform the system.

Huang Jiefu’s involvement in organ transplants in China, according to his own statements, is deeply troubling. An excerpt of an interview with Phoenix TV posted in January 2015 on their website ifeng.com, shows the problem:

“Reporter: Minister Huang, have you ever taken organs from executed prisoners?
Huang: I said I went there once, but I was not the one who did the extraction. But after that one time, I did not want to go again. I am a doctor. Doctor has a moral bottom line, which is respecting life and helping the sick. This must be done in sacred places, otherwise, it is against the moral bottom line of a doctor.

Reporter: Do you remember which year was it?
Huang: 1994.

Reporter: When you help the recipient, you think it is saving a life. But do you try not to think about the donor?
Huang: Majority of the transplant surgeons feel helpless. On the one hand, you face the patient who has a failing organ. As a doctor, you have the technique and responsibility to save people. But the other side of the story, when you think about the organ source, you feel helpless.”

The foreign transplant professional hosts are professional colleagues to whom deference in organizing the events is due.

I do not pretend to know anything much about transplantation technology. I would not dream of walking into an operating room and attempting a transplant, even if I were allowed to do so. I am confident that, if I tried, I would make a total mess of the operation and put the life of the patient at risk. I do have, in contrast, extensive experience in dealing with human rights violators in general and Chinese human rights violations in particular.

The transplant professional hosts and organ transplant abuse researchers have the same goal, to stop the use of organs from the executed in China.

My goal goes beyond that in three respects. I also want
a) an end the use of organs from prisoners of conscience,
b) full accountability for past abuse,
c) justice for the victims and their surviving family members.

As well, commonality of goals is not sufficient for us to agree. Means matter. To take an extreme example, one can say that Nazis and the Jewish community before and during World War II shared a common goal, a better world, and just differed on the means. Yet, the difference in means made all the difference.

The Congressional hearing on Chinese organ transplant abuse was conducted by Republican congressmen Chris Smith and Dana Rohrabacher to embarrass the Obama Administration.

What people say should be judged by content and not dismissed because of speculation about their motives. If someone tells you the truth, saying that the person’s motives are impure is no excuse for ignoring the truth.

As a lawyer, I am trained to accept a presumption of good faith. The presumption is rebuttable, but only by evidence, and not by speculation.

The attribution of bad faith to the Congressmen who conducted the hearing on Chinese organ transplant abuse is a game anyone can play. If event hosts can claim that US Congressmen are acting out of venal motives, why could I not the same about event hosts? Why could I not say that their real motivation is not ending organ transplant abuse but rather the red carpet treatment event hosts are getting from Chinese officials by their turning a blind eye to their abuse and pretending to go along with their pretend attempts at reform?

I would not say that about event hosts because I presume that the hosts are acting in good faith. Event hosts should extend a similar courtesy to US Congressmen.

It strikes in any case, me as an outsider to US politics, that it is imprudent to dismiss Republicans, simply because they are Republicans, when the Republican Party controls the White House, both Houses of Congress, and a large majority of state governorships and assemblies. However, even if Republicans were a tiny minority in the US, what they say should still be judged by its content and not by speculation about motives.

Moreover, what I heard from the two Congressmen struck me as worthy of attention. They brought to the discussion a long experience in addressing human rights abuse in China, indeed, considerably more than mine. They pointed to Chinese discourse about organ transplant abuse and its similarity to discourse about a long list of other well documented violations.

Congressman Smith referred to the Tiananmen square massacre, forced abortion and sterilization, torture, forced labour camps, sex trafficking, censorship and prison conditions. He asked former head of The Transplantation Society Francis Delmonico:
“How do you independently verify that even though he [Huang Jiefu] may be very sincere that anything he says, zero foreign customers for organ trafficking in 2016, how do you independently verify that when there has been such a backdrop of terrible duplicity, lies, and deception on the part of the government?”

The answer of Francis Delmonico was: “I am not here to verify. That is not my job.” The testimony of the hearing and this exchange can be found at this link:

Foreign transplant professionals, on visiting China, can see that organ transplant abuse in China has been curtailed.

There is a difference between a practice being curtailed and practice ending. I accept that foreign transplant professionals, were told in travelling throughout China, in the places they have visited, that transplant abuses have been curtailed. However, that is different from their being actually curtailed. What do the foreign visitors do to look behind the Potemkin village put up for the visitors to see?

Whatever was done, two things are essential. One is the ability to make visits unannounced. Visits prepared in advance in China are bound to be cosmetic. China has a long history of arranged visits to prisons which hide the reality of the prisons to the visitors. Why should arranged visits to hospitals be any different? Second, foreign visitors need to have access to the original files both of the patients and the donors.

Organ transplant abuse researchers have presented data that is not verifiable.

The statement that research is not verifiable could be made only by someone who has not examined the research. The research that I, Ethan Gutmann and David Kilgour have done now going over ten years is all not just verifiable, but verified. We followed a simple principle, that anything we saw or heard or read an independent outside researcher could also see or hear or read. We turned aside all hearsay or rumour.

Here is a specific example. I went to Israel to speak on May 30, 2007 at a symposium on organ transplants at Beilinson hospital near Tel Aviv. The Chinese Embassy to Israel circulated a statement at the symposium that the report we wrote on organ harvesting of Falun Gong practitioners contains, according to the Embassy:
“verbal evidence without sources, unverifiable witnesses and huge amount of unconvincingly conclusive remarks based on words like ‘probably’, ‘possibly’, ‘maybe’ and ‘it is said’, etc. All these only call into question the truth of the report.”

Shortly after these remarks were made, I word searched the work we had done to date, the first and second version of our reports. At no place did we use the words “probably”, “possibly”, “maybe” or the phrase “it is said” in context that had anything to do with our conclusions. Those versions remain posted on the internet. Anyone who wants to can word search the texts themselves.

The recent update David Kilgour, Ethan Gutmann and I did is also posted on the internet at www.endorganpillaging.org. While preparing this text, I word searched that update. The words “probably”, “maybe” and the phrase “it is said” do not appear at all. The word “possibly” occurs in two contexts also which have nothing to do with our conclusions.

Organ transplant abuse researchers have presented data that is not up to date.

The current joint update of David Kilgour, Ethan Gutmann and myself was released in June 2016. Work on the update began in September 2015. All the update is current. All of it post-dates the Chinese claimed cessation as of January 2015 of organ sourcing from prisoners.

Chinese officials consistently block access to, take down and falsify any data stream to which researchers refer. What that means is that it is impossible to follow the data stream from the time after we quote or cite it.

A conference during World War II on global surgery techniques which had Dr. Mengele representing Germany could not possibly have been defended on the basis that the focus of the conference was world wide, or that Dr. Mengele’s presentation would be academic only, or that the potential to end surgical abuse far exceeded the negative history of Nazi Germany. Who participates matters.