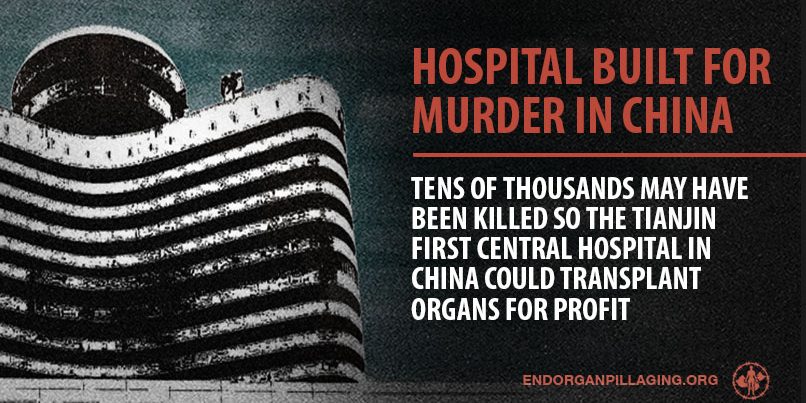 By 2006, from his base at the Tianjin First Central Hospital, Dr. Shen Zhongyang had performed over 1,600 liver transplantations, boastful Chinese media reports say. Tianjin First, a hospital whose transplant ward he led, was just getting a new, well-funded building courtesy of the local government. Shen had patented his own surgical technique for rapid liver perfusion and extraction, and official transplantation websites were calling him China’s “great transplant pioneer.”

With all the celebration in the Chinese press of the doctor’s life-saving operations, little attention was paid to the sources of the organs he transplanted. Dr. Shen’s career was being built on a pile of corpses—that much was apparent—but the real question was: where did they come from?

The official explanation, that only formally executed prisoners are used, relies for its credibility on the number of transplants corresponding roughly with the number of executions. In Tianjin, that would be about 40 executions a year—a number derived from calculating the city’s population against the national death row total.

At Tianjin First Central, the number of transplants is off the charts.

But at Tianjin First Central, the number of transplants is off the charts.

Official numbers from the hospital are scarce, but penetrating that secrecy makes clear that Tianjin First Central Hospital, one of the busiest and most acclaimed in the country, for years having enjoyed extensive official backing, transplanted many times more organs than a supply of executed prisoners could support. Moreover, it appears to have transplanted many times more organs than it says it did.

In a detailed study of its activities based on publicly available documents, Epoch Times found sufficient evidence to throw into great doubt, if not demolish entirely, the official narrative of organ sourcing in China. This is simply due to the number of transplants: they are far too high.

That’s a problem for China.

It means that the vast majority of organs transplanted at the Tianjin First Central Hospital—and by extension, other major hospitals around the country—could not have come from executed prisoners. Nor did they come from volunteers in any significant numbers, given that it is only very recently that a voluntary organ donation system has been attempted in China, and it is still in its fledgling stages.

This inevitably raises another question, which the Chinese authorities have found particularly vexing but have never addressed: where did the organs actually come from? What is the secret organ source that in the year 2000 suddenly became the basis for a nationwide expansion of organ transplant capacity, for which the Tianjin First Central Hospital stands as an exemplar?

For years human rights researchers have alleged that the captive population of Falun Gong adherents, a persecuted Chinese spiritual practice, is the likely source. The gaping disparity in the Tianjin case, along with a variety of other circumstantial evidence, adds ammunition and urgency to their claims.

This issue has largely been dodged by luminaries in the international medical community. But the circumstantial evidence bolstering the alternative explanation—organized mass murder of prisoners of conscience, using the tools of medicine, in the service of profit, by the world’s most populous nation—continues to grow, and with it frustration among doctors that nothing is being done.

In the late 1990s, Shen Zhongyang, a liver transplant surgeon, was at a definite ebb in his career: the organ transplantation industry in China was little developed, operations were risky, so willing recipients were few, and organ supplies were limited.

In May of 1994, he rendered Tianjin its first liver transplant after persuading a 37-year-old migrant worker suffering from cirrhosis to undergo a transplant. At the time, transplants were done free of charge for the recipients, largely due to the low success rate.

Dr. Shen Zhongyang, the director of the transplant center at Tianjin First Central Hospital, in an undated photo. (Kanzhongguo)

Years passed with no notable developments, and in 1998 Shen returned from Japan where he had obtained his M.D. Upon return, he spent his own money (100,000 yuan, or $15,000) to set up a small transplant unit at the Tianjin First Central Hospital.

Progress was slow at first: by the end of 1998 his transplant unit performed just seven liver transplants. In 1999, they performed 24.

In 2000, things quickly turned around as a new organ supply abruptly came online. Over the next decade Shen Zhongyang did some of the briskest organ transplantation business in China.

In Tianjin, numbers kept going up: 209 liver transplants by January 2002; and then a cumulative total of 1,000 by the end of 2003, according to a report in Enorth Netnews,  the mouthpiece of the Tianjin municipal government.

Tianjin First Central Hospital’s successes are a microcosm of the Chinese organ transplantation system: its operations are opaque; paramilitary ties lurk in the background; organ procurement remains unexplained and rapid, suggestive of a pool of donors waiting to be selected from; and the surgical techniques are consistent with live or close-to-live harvesting from donors.

The most significant moment for the expansion of Tianjin First, an apparent sign of confidence of continued abundant organ supply, was the 130 million yuan ($20 million) investment in December 2003 by the Tianjin Municipal Bureau of Health to construct a 17-story (including a ground and two basement levels) transplant building.

Named the Orient Organ Transplant Center, with a 500 bed capacity and floor space of 36,000 square-meters, it was to become a “comprehensive transplant center capable of liver, kidney, pancreas, bone, skin, hair, stem cell, heart, lung, cornea, and throat transplants,” according to Enorth Netnews.