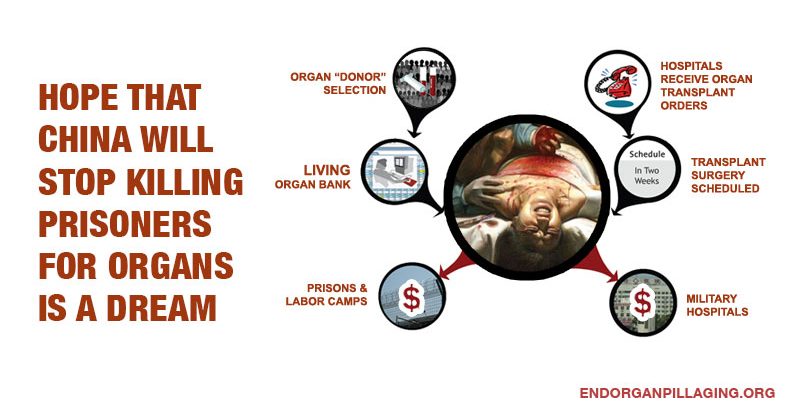 A recent medical report by medical experts shows a conflict between organ transplantation practices in China and the West. The report states concerns that “organs from executed prisoners are still being used for transplantation in China,” while many medical professionals believe that the practice has stopped.

So where does the truth lie? The report suggests that the objectivity of Western transplant professionals has been clouded by a “sincere hope” that China will change.

Since January 2015, Chinese officials have been actively publicizing that they have stopped killing prisoners for organs, and many Western media reports also tell the same story. However, there has been no change in China allowing independent investigation or access to transplant data—China simply doesn’t allow it. And the only data to go on is statements from Chinese officials, who are still within China’s communist system.

China reported organ ‘donations’ and transplantation at a record high in 2015. The sources of these organs are undisclosed. This fact alone should be raising alarm bells.

Beyond the fact that the unethical practice of using prisoner organs is still happening in China, the report states that China’s transplant system may still facilitate a much graver crime of “ongoing forced organ harvesting from prisoners of conscience.”

Most prominently, independent investigations have found tens of thousands of practitioners of the Falun Gong spiritual practice have been killed for the sale of their organs for transplantation since 2002.

The report explains how the changes to China’s system are duping observers by reclassifying prisoners as regular citizens. Organs taken from executed prisoners, willingly or not, are now classified as “voluntary donations from citizens.”

With a vast prison population, Chinese authorities do not publicly distinguish between criminal prisoners or prisoners of conscience. Unfortunately, neither does the Western medical community.

While the authors acknowledge the “positive progress” the transplantation community has had on China’s new donation program, they give strong caution that hope for China to change is “yet a dream while prisoners remain at risk under the demand and ongoing medical exploitation of execution.”

The report may not draw international headlines with its academic title: “Historical development and current status of organ procurement from death-row prisoners in China.” However, it provides moral clarity for the medical community, helping it to not undermine medical ethics by being swayed by official statements from China, without transparent data.

True or not, China reported organ “donations” and transplantation at a record high in 2015, even though the majority of Chinese citizens are not willing to donate their organs. The sources of these organs for transplant are still undisclosed. This fact alone should be raising alarm bells, instead of praise, for the changes to China’s donation system.

China will host the next international meeting of transplantation professionals in August 2016 in Hong Kong. Is this an opportunity to require China to provide data and access to its shady transplantation records? Or will China’s criminal transplantation activities be swept under the carpet with a brush of “sincere hope”?

My sincere hope is that sound medical analysis like this report will influence professionals to see through China’s unverifiable statements. It is an opportunity to leverage the 2016 World Transplant Congress to insist that China immediately adhere to the ethical standards required of the rest of the world.

Perhaps it is a daunting task to make any requirement of a country still run by an opaque communist regime. Yet the willful erosion of the basic values of life and ethics in transplantation is perhaps a much greater danger to us all.

Kay Rubacek is a producer for Swoop Films and the film “Hard To Believe,” a documentary about how doctors became murderers and why we turned a blind eye.