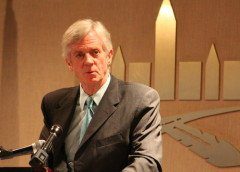 Rabbi Barry Schlesinger and members of the congregation, Shalom Shabbat.Thank you for the honour of speaking to you this morning on the Numbers/Leviticus injunction ( 19:16): “Do not be indifferent to the bloodshed inflicted on your fellow man.” There are few limits on what this implies for today, so permit me to discuss briefly four important issues: Herb Gray, Canada/Israel relations, the plague of antisemitism and love of neighbour.

The passing of Herb Gray is a large loss for Canada. I was privileged to sit with him in Jean Chretien’s cabinet for seven years, where he was a tower of wisdom and respect for all. He would often close debate on issues, drawing on what others had said to reach a consensus in the national interest.  He lived his life according to the Jewish values of ‘caring and sharing’, with all they imply in terms of social justice and respect for all. At the service yesterday, many examples of Herb’s practice of these values were cited.

One of the best of many tributes to him was by Beryl Wajsman of Montreal, which ends, “Upon hearing of a death, Jews say three words: ‘Baruch dayan emet’. Blessed be the true judge. Herb Gray’s life was testimony to the fact that those words are not just a blessing, but an epitaph we should all strive for. I miss you dear friend”. We all miss him.

A Visit to Israel

In February, I spent several days in Tel Aviv, Jerusalem and Haifa. The activities included:

Witnesses included Sarah Lu, a Falun Gong practitioner from China who now lives as a refugeee in Finland, and Ethan Gutmann, now of the UK, who has researched Uyghur, Tibetan and house Christian victimization on organ pillaging and has a new book on the subject, The Slaughter.

Israeli transplant surgeon Dr. Jay Lavee, who helped change the Knesset law, was a star witness. Earlier, Israeli health insurance companies would pay to send patients to China for vital organs. When Dr. Lavee learned what was really going on in China, it became a crime in 2009 for Israelis to buy trafficked organs from anywhere; no Israeli appears to have gone to China for this purpose since. Israel is now the world leader in preventing its citizens from participating in the inhuman crime against humanity ongoing in China since 2001.

Legislators everywhere should follow Israel’s lead here, so please consider contacting your own MP and getting him/her to support Irwin Cotler’s private member’s bill in our Parliament, which would achieve the same result for Canada. Even better would be for the Harper government to include Cotler’s principles in its own legislation.

Presumably, you all heard Stephen Harper’s address to the Knesset or read accounts of it.  It was one of his best ever and I quoted four short excerpts from it in my own remarks at the Knesset forum (which can be accessed under the photo taken there at www.david-kilgour.com ).

In discussions and observations during the visit, I was struck by the strengths as well as the challenges of Israel and its neighbours, including:

It would appear that virtually all people of good will, whether in Canada, Israel, the West Bank or Gaza, favour the creation of a democratic Palestine.  We might differ on how best to achieve it, but we all want and need it. I hope no-one here has any doubt that I strongly favour a successful and democratic homeland for the Jewish people. Israel should cease being singled out for unfair criticism internationally.

One major obstacle to peace in Gaza is Hamas, a listed terrorist body in Canada, the E.U., U.S. and many democratic countries. For example, it blocked a UN refugee agency from introducing textbooks in local middle schools, claiming they focus too heavily on “peaceful” conflict resolution. A spokesman for the Hamas-run education ministry says the texts do not sufficiently address Palestinian suffering or acknowledge the right to battle Israel. Hamas also objected to the inclusion of the Universal Declaration of Human Rights, in part because it includes the right of people of different faiths to marry and the right to change one’s religion.

In the Knesset, Mr. Harper mentioned a new antisemitism,  the “mutation of the old disease of antisemitism and the emergence of a new strain… in much of the western world, the old hatred has been translated into more sophisticated language for use in polite society”.

The book Globalizing Hatred – The New Antisemitism by Denis MacShane, minister for Europe in Tony Blair’s cabinet, is blunt. In 2005-06, MacShane chaired the first-ever UK All-Party Parliamentary Commission of Inquiry into antisemitism. Let me stress two of his points:

The Devil That Never Dies

Because interfaith harmony is essential for a peaceful 21st century, I’d like as a Christian to end by referencing a book published last year, The Devil That Never Dies, The Rise and Threat of Global Antisemitism, by Daniel Goldhagen, formerly of Harvard’s academic staff.

His lengthy and comprehensive thesis is that antisemitism has exploded in recent decades, insinuating itself into the minds of millions of persons globally. Permit me to stress four of its points:

The ongoing campaign against antisemitism by all responsible people, faith communities and governments must be determined and realistic. Hard-core hate mongers might persist, but many others can be reached, especially young people. Universal values, such as fair-mindedness, justice for all, and compassion, are strong allies in combating racism, including antisemitism.

We must all stand united against hatred and indifference. The 20th century was the worst ever in terms of violence directed at believers of all faiths, mostly by totalitarian figures like Hitler, Stalin, Mao and Pol Pot. The major lesson for all faith communities is clear: if we stand shoulder-to-shoulder when anyone in our own or another religion is being persecuted anywhere, many innocent lives can be saved.

Early intervention is essential.  The desecration of Jewish synagogues and cemeteries has increased across the world; faith communities and inter-faith councils should voice outrage the moment incidents occur. We should all speak out for a multi-religious and multi-cultural world. Civil society, community leaders, role models and governments at all levels must denounce antisemitism and hatred voiced against any religion or culture.

The international community must condemn and deter aggression by regimes against other countries or religions. As Rabbi Reuven Bulka says, “Holocaust deniers are not stupid; they are evil. (They) would eagerly welcome another holocaust, which they and their ideological progeny would again deny ever happened.” I’ve had many discussions on this and related topics with your friend and mine, Dr. Truda Rosenberg, who hoped to come this morning, but was not feeling well enough to do so.