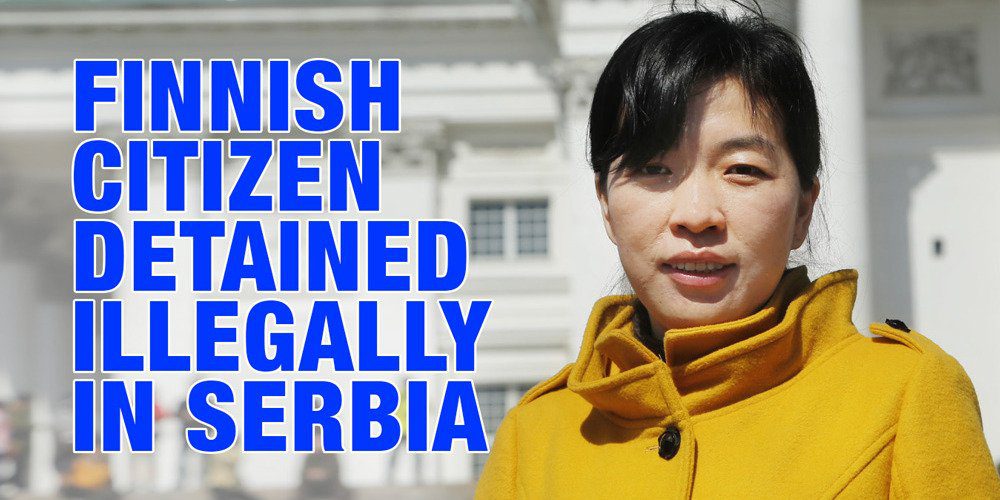 Lihua Lan is among the 11 individuals are still in illegal detention by Serbian police. Lihua Lan, a Finnish citizen and arrested at her hotel (Apartments Residence) by the Serbian police.

We arrived to Belgrade on the scheduled flight. At the customs inspection, our passports were compared to a list of names on a piece of paper. Our passports were taken from us and we were escorted into a back room. Our suitcases contained no human rights related pamphlets or banners or anything that could be perceived “incriminating”. The officers told us that we would be deported.

Soon we heard that Lihua Lan, a Finnish citizen, had arrived to Belgrade around noon. She got through the customs but was arrested at her hotel (Apartments Residence) by the Serbian police. We believe she was able to cross the border since her name was not mentioned in any emails. But I told about her arrival to a Serbian organizer in one of my phone calls on Monday morning, and the call may have been monitored.

Lihua Lan was taken to a detention center in Paneska Padinska Skela. According to our sources, nine Bulgarians whose original intent was to take part in the activities during the summit are there as well. We have no information on other detained activists, but they may exist.

We are told that these detained people have been offered two options:

1) Signing a statement that they came to be part of illegal protests, and then they would be set free.

2) If they don’t sign, they can be held in detention (for up to 30 days?), deported like criminals, and possibly blacklisted in the future.

So far, everybody has refused to sign, because none of them have committed any crime, nor have they had that intent at any point. Needless to say, their treatment has nothing to do with rule of law. Moreover, we assume that signing such a statement would invalidate any further claims (financial or otherwise) against the Serbian authorities, as the detainees would have admitted their “guilt”.

I have heard that the detained activists can be accused of being “threat for the security in Serbia” according to Article 40 of the Serbian act for foreigners.

Therefore, we formally and cordially ask the Finnish embassy to demand immediate release of Lihua Lan, a Finnish citizen and United Nations refugee, who is being unlawfully detained by the Serbian authorities. Furthermore, signing a statement of guilt must not be a condition for her release, as she is not guilty of any crime or unethical intent.

Even the Serbian authorities admitted that they are assured of our non-violence. In our view, this suppression constitutes an egregious, intentional violation of basic freedoms.

We will contact the Finnish MEPs on Tuesday, do our best to raise the issue in national and international media and the European Union, and hope that the Finnish foreign ministry will likewise express its solemn disapproval of Serbia’s actions. Therefore, we ask for the Embassy of Finland in Belgrade to escalate this affair to the Finnish Foreign Minister and other relevant officials.

The latest independent estimates of organ harvesting from Chinese prisoners of conscience put the death toll at around 65 000 people. Our peaceful campaigns are not “anti-Chinese propaganda”, as the Serbian authorities may claim. We are unpaid volunteers raising awareness about a documented genocide.