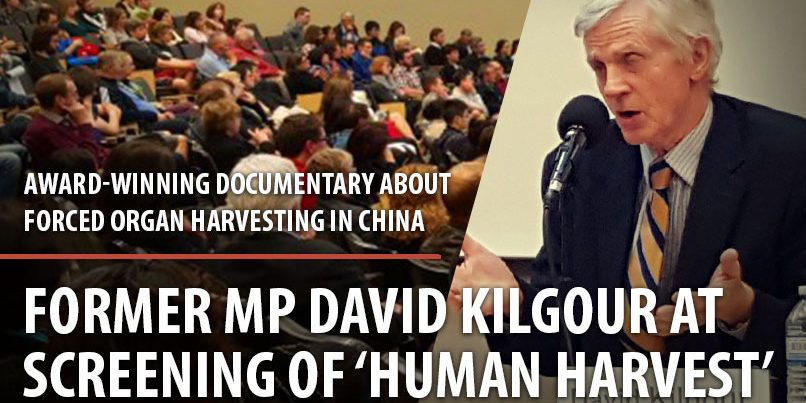 The last few days of April were busy ones for David Kilgour, the now-retired longtime Edmonton MP and former secretary of state for Asia-Pacific. He had come to Edmonton for the screening of the documentary “Human Harvest,” an award-winning Canadian film that delves into the issue of state-sanctioned forced organ harvesting from Falun Gong adherents in China.

But being busy isn’t that unusual for the very active human rights champion, who has expanded his human rights activism since retirement and supports a number of causes, including efforts to end the ongoing persecution of Falun Gong in China.

It was in 2006 that Kilgour and fellow Canadian international human rights lawyer David Matas conducted an independent investigation, coming to the horrendous conclusion that vital organs were beig taken from living Falun Gong practitioners in China and sold for profit in a gruesome trade in human organs.

I think people in Edmonton and Alberta, and Canada, are really interested in human dignity and human rights, and this [persecution of Falun Gong] is a profoundly human dignity issue.

Kilgour has travelled to many countries to call for action to stop this atrocity, talking at forums and addressing parliaments while presenting the facts.

Coming back to Edmonton, though, was a little special, as this is where he served the people in his southeast Edmonton riding for 27 years as a member of Parliament, and where he had spent several years before that as a prosecutor.

“It was a very, very happy period, and I enjoyed it immensely, trying to serve the people of Southeast Edmonton and Beaumont,” said Kilgour, who now resides in Ottawa.

David Kilgour, a former Edmonton MP and Canadian secretary of state for Asia Pacific, speaks at a rally in Edmonton on April 29, 2016 to commemorate the historic April 25, 1999 peaceful appeal by Falun Gong practitioners in Beijing to practice their faith freely in China. (Shar Chen/Epoch Times)

“I like to think the vast majority of them would approve of what I’m doing for human rights, for Falun Gong, or for Sudan, or for Iran, or anywhere, because I think people in Edmonton and Alberta, and Canada, are really interested in human dignity and human rights, and this [persecution of Falun Gong] is a profoundly human dignity issue.”

Kilgour’s Edmonton itinerary included an April 28 screening of “Human Harvest,” in which he is interviewed, followed by a panel discussion. The event took place at the University of Alberta and was sponsored by the university’s John Dossetor Health Ethics Centre.

The following day, Kilgour spoke at a rally in downtown Edmonton to commemorate the April 25, 1999, large-scale peaceful appeal by Falun Gong adherents in Beijing. Then on April 30, he participated in a panel discussion after a second screening of the documentary was held at the Metro Cinema. In between all this, he was doing media interviews.

A Crime against Humanity ‘in the Shadows’

In accepting the prestigious Peabody Award for his film last May in New York City, Vancouver director Leon Lee thanked Kilgour and others in his speech at the awards ceremony.

“This award really belongs to David Matas, David Kilgour, Ethan Gutmann, and the many others who work tirelessly to bring an end to this crime against humanity,” Lee said.

Gutmann, an investigative journalist and author, spent seven years researching China’s state-sanctioned organ harvesting and published his findings in his book “The Slaughter” in 2014. He estimates that at least 45,000 Falun Gong prisoners of conscience have been killed for their organs.

Pointing to Crystal Chen who joined him on the stage, Lee said the award also belongs to people like Chen, who was arrested five times in China for her belief in Falun Gong and was forced to undergo multiple blood tests in the labour camp to see if she was a match for an organ transplant.

If she had been a match she could have suffered the fate of having her organs removed while she was still alive, dying only after they had been taken out, to ensure the organs remained fresh.

“If any one of those tests had come up as a match for an organ transplant, she wouldn’t be here with us tonight,” Lee said.

In Edmonton, panellist Dr. Charl Els said in his opening remarks that the film “shines light on a practice that is so inhumane it is difficult to believe.” Els is an associate professor at the University of Alberta’s department of psychiatry and the John Dossetor Health Ethics Centre. He serves on the advisory board of Doctors Against Forced Organ Harvesting (DAFOH), an NGO that aims to provide the medical community and society with objective findings of unethical and illegal organ harvesting.

Citing the executive director of DAFOH, Els said the heinous practice has been “described as one of the worst crimes against humanity the world has ever seen. It’s been compared to the Holocaust, as well as the Rwandan Genocide, yet it hides in the shadows.”

It was this lack of overt public spotlight on the atrocious practice that had many in the audience baffled, while wondering what they could do to help.

“We’re just grassroots people here, what in the heaven’s name do we do? And I want to buy that documentary and put it in my local library,” commented one woman during the April 30 panel discussion.

Els suggested that people who want to help contact their provincial and federal representatives and ask them “what we can possibly do to make a difference.”

He said concerned Canadians should also ask themselves what those Chinese surgeons who come to Canada for fellowships or for training in transplant surgery would do once back in China. “Would that not make us complicit in what is happening in China?” he said.

Questions should also be raised about the issue of multinational pharmaceutical companies that conduct clinical trials for medications used during transplant operations in China, Els said.

Kilgour said that at some point, enough people will stand up and ask the Chinese communist regime why it is killing its citizens for their organs, and this will eventually bring to an end the killing of innocent people.

Besides pressuring China, there are also things Canadians can do at home, Kilgour said.

“The least we can do as Albertans and Canadians is making it harder for our own people to go to China to buy organs,” he said, citing as examples laws passed by Taiwan and Israel that prevent their citizens from getting organs in China.