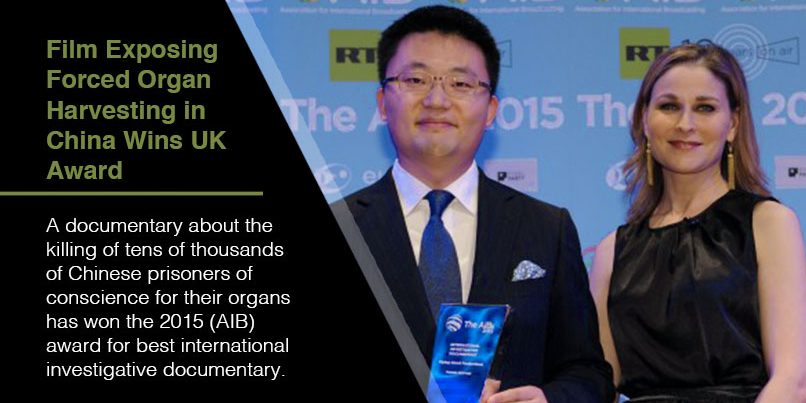 LONDON—A documentary about the killing of tens of thousands of Chinese prisoners of conscience for their organs has won the 2015 Association for International Broadcasting (AIB) award for best international investigative documentary. It follows the film’s receipt of aprestigious Peabody award earlier this year.

On winning the most recent award, director Leon Lee said: “This is a huge honor for me and the team who stood by me for eight years while we made the film. I hope more people will now be prompted to watch the film and, most importantly, that it will make a difference and end organ harvesting.”

Judges who chose the film, which was competing against productions from the BBC, Sky News and others, said that it “captures the horror of the story through credible testimony and proactive research”, adding that the story “definitely needs to be more widely known.”

The film’s producer, Flying Cloud, is a small independent company based in Vancouver, Canada.

Simon Spanswick, chief executive of UK-based AIB, agreed with the judges: “Although I was not a judge for this category, as a former programme-maker, I could see this film was clearly up there. Small production companies that do really good work do win AIB awards – it’s not unusual – and the award will have an impact and enable the programme to be sold more widely.”

It questions the source of the organs and how Chinese hospitals can offer transplants within weeks when patients in the West typically wait years.

The truth unfolds: The organs are being forcibly taken from prisoners of conscience including people who practice Falun Gong, an ancient spiritual practice, Uyghurs, Tibetans, and House Christians. The film reveals that it is Falun Gong practitioners who are targeted most.

“When I came across this in 2006, I could not believe it at all. I thought it was nonsense,” said Lee. Nevertheless, he decided to look into the subject and became convinced that organ harvesting is taking place on a large scale in China.

It is estimated that 40,000 to 60,000 people were killed for their organs between 2003 and 2008, although Lee spoke off the record to a military surgeon from China who said the figure was over 600,000. “Other information suggests it could be 2 million,” Lee said. “We were conservative in the film. What we showed was the tip of the iceberg.”

The film was screened in British Parliament prior to the AIB award ceremony.

Lee admits that many times he felt a sense of hopelessness but, after winning the Peabody award, the film captured the interest of mainstream media. “Media executives told me that they had heard about organ harvesting in China but never took it seriously,” he said.

That has now changed. The film has been broadcast in 20 countries and is also available, unofficially, in China. “As a filmmaker, I’m against piracy but you can buy it in China for 10 yuan [$1.60],” he admitted.

Lee is increasingly convinced of the power of film. While he acknowledges that more work is needed to stop the atrocities taking place in China, he believes change is coming and that raising awareness will help the process.

“When people ask me what anyone can do when China is so big and powerful, I tell them to pass the word to family, friends, and colleagues, because the more people know about this, the sooner it will end,” he said.