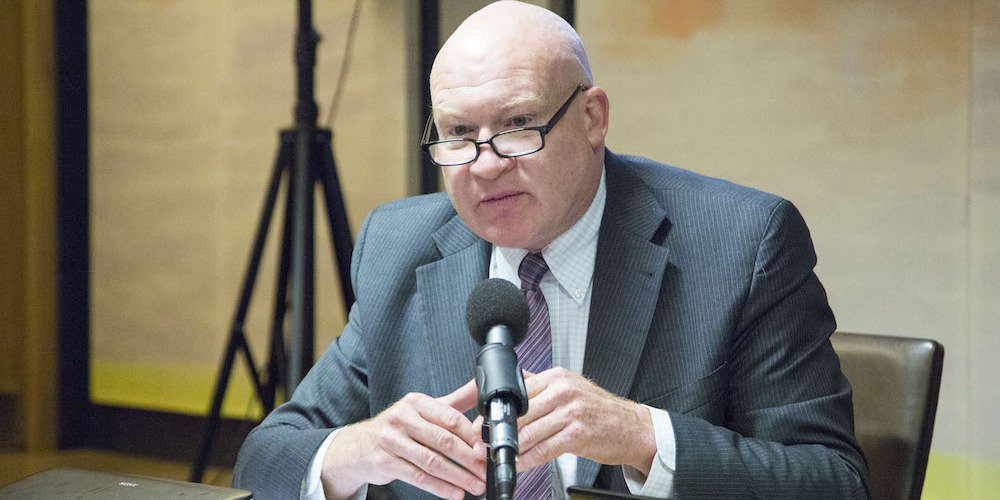 For those who engage in primary research on the organ harvesting of prisoners of conscience in China, this hearing comes at the end of a particularly ominous year.

Winter saw the fatal collapse of two years of Western medical engagement with Chinese medical authorities. Spring brought new evidence that the mass harvesting of prisoners of conscience was not only continuing, but accelerating. Fall carried with it the first reports–unconfirmed, yet surprisingly consistent across China’s provinces–that the Chinese authorities are no longer just taking DNA swabs and blood tests consistent with tissue-matching from Falun Gong in prisons and labor camps, but in their homes.

In short, the history that I am going to condense for you today is not “once upon a time in China.” It is still being written. And it is not a tale of a far-away land. I am holding in my hand a report that proves–even with the convenient excuse of patient confidentiality, an excuse we don’t normally allow for being stabbed with a sharp instrument–that people from the UK are still going to China for organs. In fact, I personally interviewed one of them last week in Birmingham. It is an illusion to think that Wales is exempt. 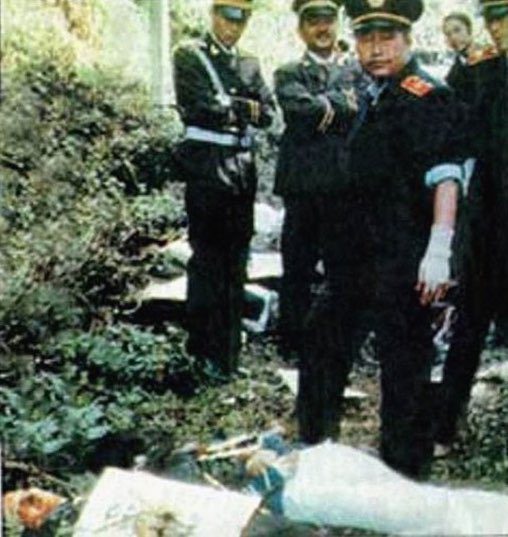 Let’s begin in the mid-1990’s with these men who have just carried out an execution. The enlisted armed policeman on the left tries to look “official.” His comrade to the right suggests it’s all a big joke. In the foreground a Supreme Procuratorate officer, wearing a white rag against back splatter, meets our gaze defiantly.

These are the eternal faces of routine execution; blur the racial features and we see the same, uneasy postures in many authoritarian states. Yet from an official Chinese perspective, there was nothing surreptitious taking place; the signs on the executed prisoners indicate that they were duly convicted of capital crimes (murder, rape, drug sales, etc.). Their bodies will be gathered into medical vans and harvested for their kidneys and livers. That’s not secret either; since 2006, Beijing has admitted that the vast majority of the organs that Chinese hospitals transplant into aging Western organ tourists and rich Chinese are from death-row prisoners. 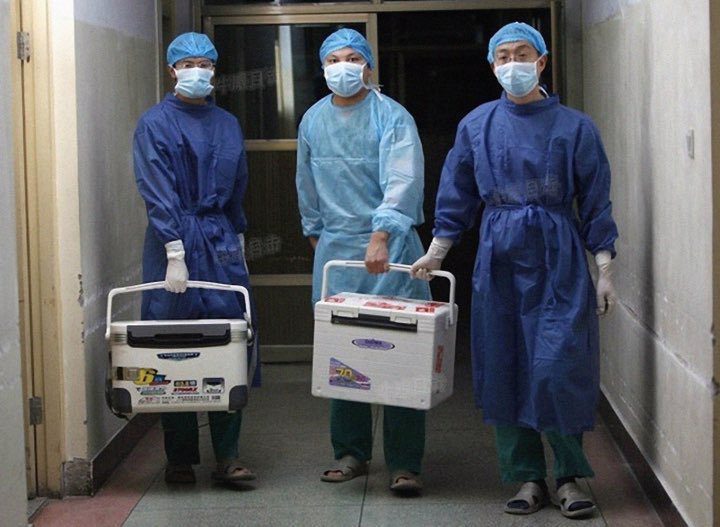 Twenty years later, these are the new executioners. Most procedures are carried out quietly by surgeons. In this photograph, they carry freshly extracted organs. The critical change since the mid 1990s is that the majority of retail organs in China are not extracted from death-row convicts, but from prisoners of conscience–political and religious prisoners who cannot be sentenced to death even under Chinese law: Tibetan monks, a Uyghur activist who openly shook his fist in a demonstration, a Falun Gong woman who passed out leaflets on the street. 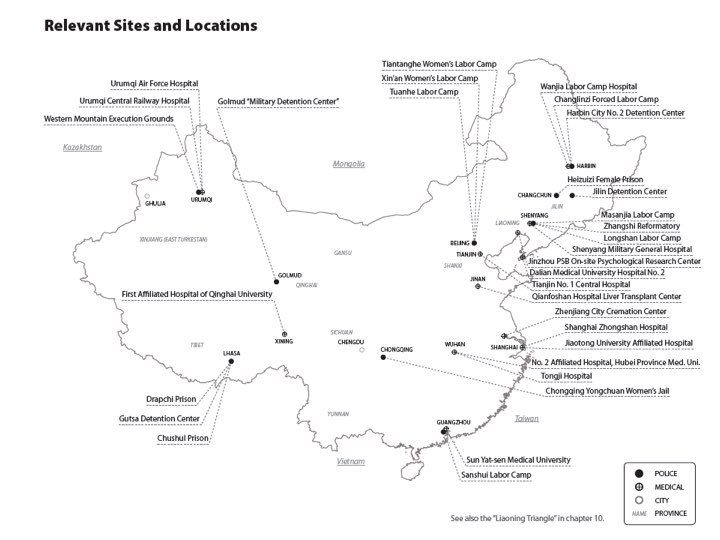 This transformation required an infrastructure. And this map includes major police and medical installations–even crematoriums–throughout China that were involved in organ harvesting. It’s hardly comprehensive; these are only sites that I established through personal interviews in my new book, The Slaughter. The Chinese medical system is said to generate approximately 10,000 transplants per year. The number of legally executed prisoners is well below 5000. Voluntary organ donations are negligible. This suggests another source. But we don’t have to solely rely on mysterious numerical gaps. We can track this twenty-year transformation through reliable witnesses.
At the Northwest corner of the map, you will find the Urumqi Central Railway Hospital. 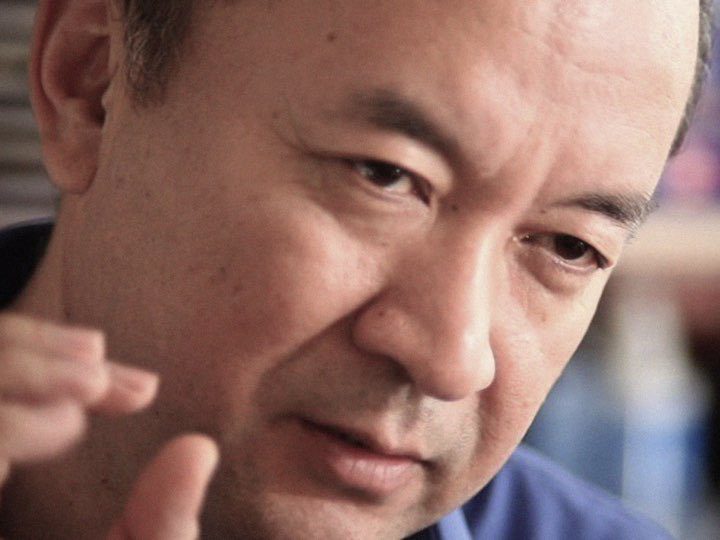 In 1995, one of the hospital’s surgeons, Dr. Enver Tohti, was driven to the Western Mountain Execution Grounds. Following an apparently routine mass execution, a prisoner was singled out for harvesting. The man was alive; the gunshot was deliberately aimed at the left side of the chest to produce shock that could act as a natural anesthesia. Dr. Tohti was told to remove the man’s kidneys and liver. Following the prisoner’s single, reflexive contraction, Dr. Tohti performed the extraction. Based on the pulsing blood, the man’s heart was beating until the end.

From the Party’s perspective this was a medical advance; live organ harvesting promotes a lower rate of rejection by the new host.

Hardcore criminals have a lot of health problems, particularly hepatitis. Two years later, Xinjiang was the staging point for a second change in medical ethics. According to a medical doctor who was forced to take blood samples of Uyghur political prisoners, the first organ harvesting of Uyghur political prisoners was carried out in Urumqi on behalf of five high-ranking Communist party officials who had come in search of young, healthy organs. Live organ harvesting would become routine throughout China, but the harvesting of prisoners of conscience who had not been convicted of capital crimes was initially confined to Xinjiang.

In 1999, Chinese State Security launched its largest action of scale since the Cultural Revolution, the eradication of Falun Gong. Yet by 2001, blitzkrieg had become trench war. According to both witnesses inside labor camps and foreign doctors who were offered Falun Gong organs on a to-order basis (I refer you to chapter 9 in particular), Chinese military hospitals began targeting select Falun Gong prisoners for harvesting. 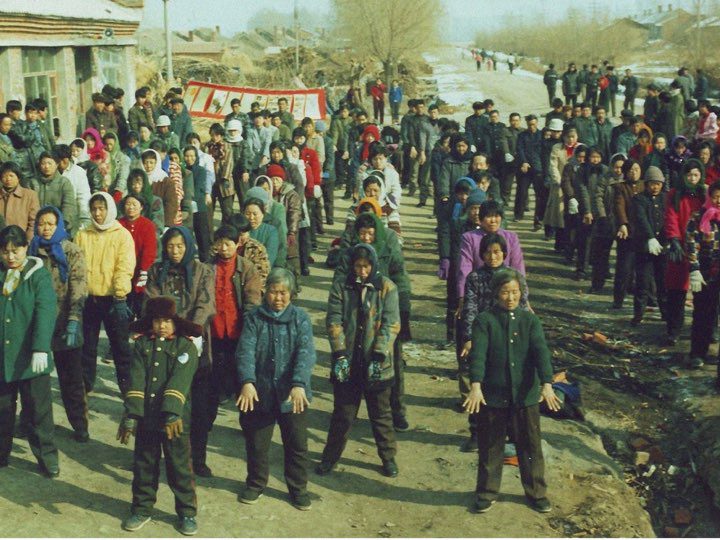 But the critical point is that organ harvesting of prisoners of conscience did not begin with Falun Gong. It evolved organically. The central decision to exploit prisoners of conscience on a mass scale was little more than a sort of legal blurring around the edges. And yet, it may fairly be asked: why would the Chinese Communist Party, so rich in resources and power, so eager for international acclaim, take such a risk? Thus the investigative problem becomes one of motive, of plausibility. It is not just the how, but the why. That question dominates six out of ten chapters in my book. I’ll just touch on it here.

You may have heard it said that the Party’s decision to crush Falun Gong was driven by its size. At 70 million, there were five million more practitioners than Party members. That’s true. Yet it is also germane that Falun Gong came from the Chinese heartland, with no western intellectual or “foreign” trappings. So the Party’s fears had more to do with that little boy in the front of the picture. 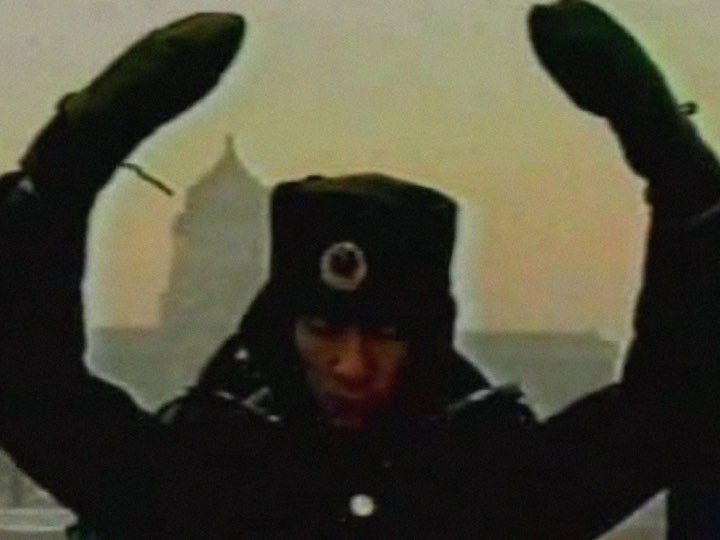 The boy who would grow up to be a man. And perhaps a soldier of the People’s Liberation Army. 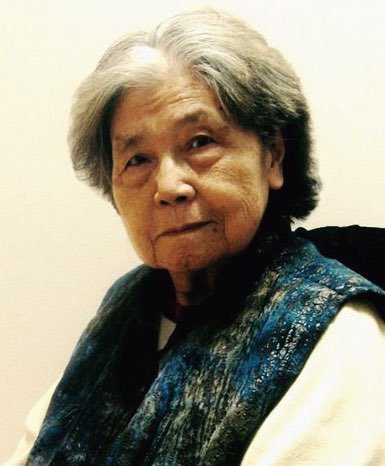 And this woman: Ding Jing. As a Falun Gong coordinator, she taught the exercises and carried plastic garbage bags around to make sure that practice sites stayed tidy. She looked after three sites. The first was for China Central Television. The second was for the Public Security Bureau (the Chinese secret police). The third was for high-ranking Communist Party officials and their wives.

For the Party, Ding Jing’s sites seemed to spring out of the Marxist template for seizing power. Start in the heartland. Infiltrate the intellectuals. Then the military and the leadership itself. For the nationalist elements of the Party, who believe that this is “China’s century,” Falun Gong’s belief in truth, compassion, and forbearance suggested an earlier China–passive, weak, and easily dominated.

Their theory was wrong. Falun Gong’s resistance in the labor camps (and indeed, globally) was not passive. It was extraordinary. As was the Party’s ferocious response. I won’t show you pictures of labor camps or atrocities. 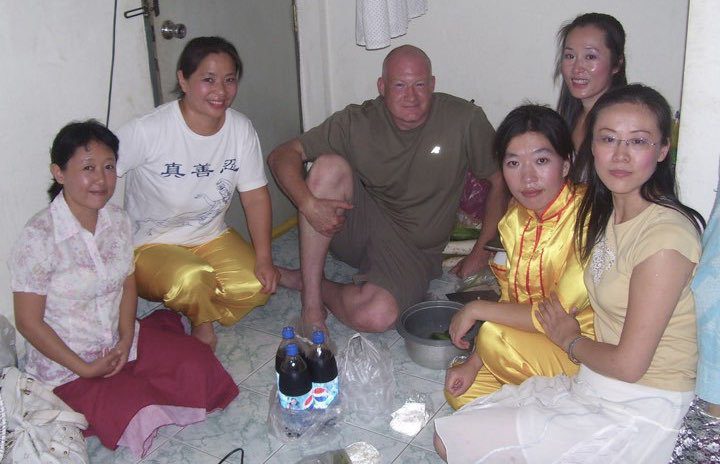 But I will show you this picture of Falun Gong refugees, because, if you take out the guy in the middle, this is a pretty good numerical representation of my findings. All of these women were in labor camp. All were tortured. One of them was sexually abused. And the woman on the left was given a series of physical examinations aimed exclusively at assessing the health of her retail organs and tissue matching.

From a sample of fifty refugees, I conclude that half a million to one million Falun Gong are incarcerated at any given time. By 2008, approximately 65,000 had been harvested for their organs. My calculations are published in two books (The Slaughter and State Organs) and my estimate is used as a baseline calculation in the text of US Congress House Resolution 281.

Kilgour and Matas, extrapolating from official Chinese numbers, estimate that approximately 60,000 Falun Gong organs were harvested by 2008. That’s an apples and oranges comparison, but clearly we are collectively looking at fatalities above 50,000. 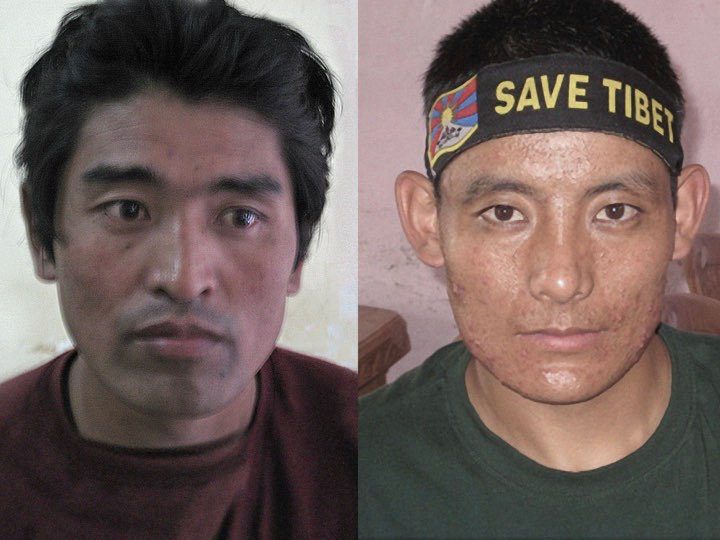 Although the numbers are much smaller, many Tibetans, Uyghurs, and even some House Christians received the same testing as Falun Gong. Enforced disappearances of Uyghurs are particularly dramatic. I can’t estimate fatalities at this time. I can only say that these are two Tibetans who made it back alive. 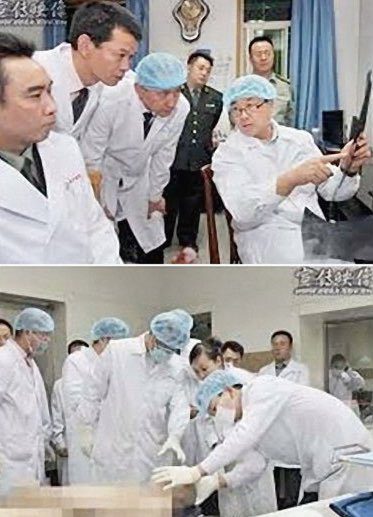 Some brief, final points.
Any pretense that harvesting was not state-controlled evaporated with the discovery, in 2012, of these photographs of Wang Lijun, the protégé of former politburo member Bo Xilai, a serious contender for the Chinese presidency. In fact, Wang Lijun is pictured directing live organ harvesting; Wang was given a public award for using a new lethal injection method on “thousands” of harvested prisoners. 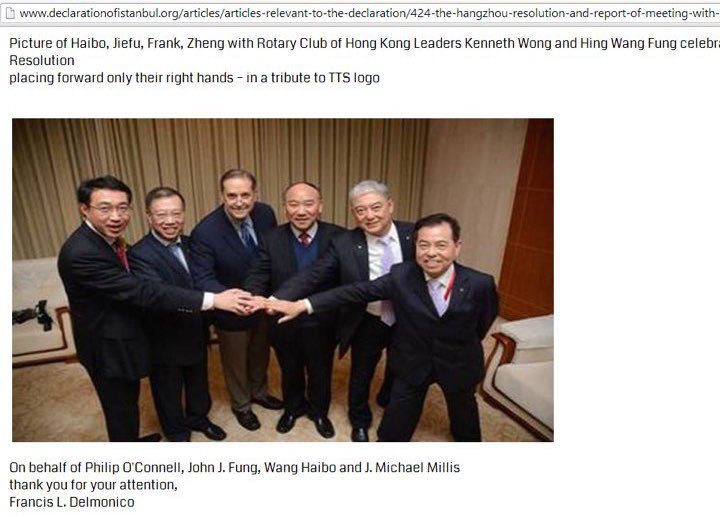 That discovery led the Chinese medical establishment to attempt to create a public picture–for your benefit–of a rapidly reforming transplant system. Perhaps some of you heard of these promises. In the West, the Transplantation Society played along by politely refusing to acknowledge the harvesting of prisoners of conscience–even if many members privately believed the allegations to be true. Earlier this year, the Chinese explicitly reneged on those promises of reform, leaving the Transplantation Society with nothing but this (now embarrassing) snapshot. We, in turn, have been left with a policy vacuum. 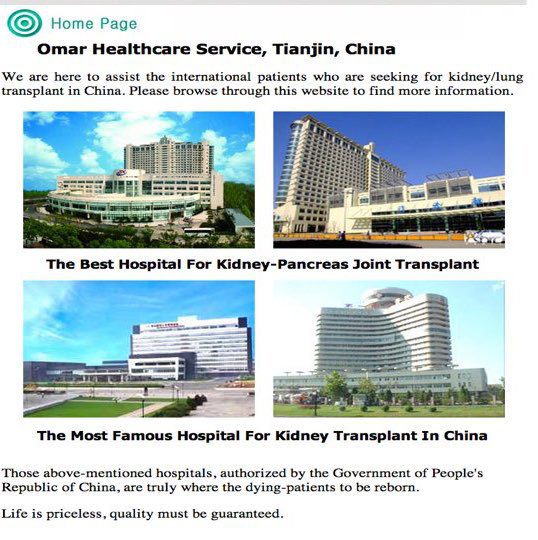 One component of that aborted reform was a supposed ban on western organ tourism. Actually it never ended. Three months ago, these Chinese organ brokers were still advertising openly on the web. 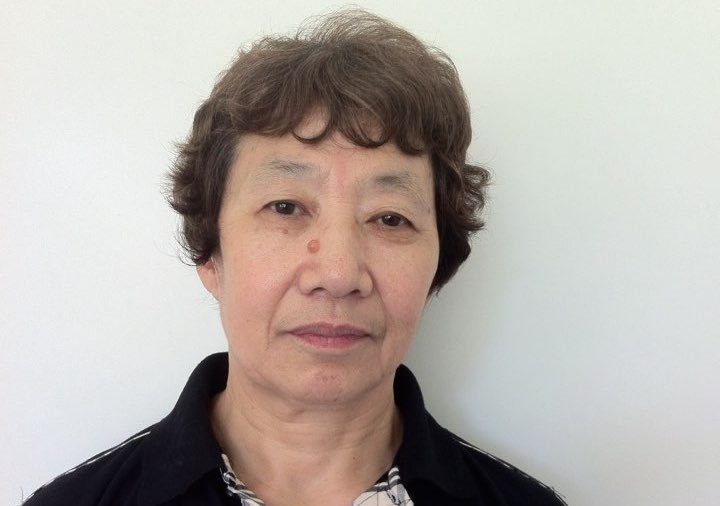 Harvesting of Falun Gong did not end either. I can’t supply a Falun Gong fatality count after 2008 yet. But this Falun Gong labor camp refugee was tested for her organs, along with 500 other p’risoners, mainly practitioners, just over one year ago in May 2013.

I live here. I am actually becoming a dual citizen this year. I know that Wales cannot make policy for the rest of the UK. Neither does Edinburgh. But your participation is vital in what I am going to suggest. 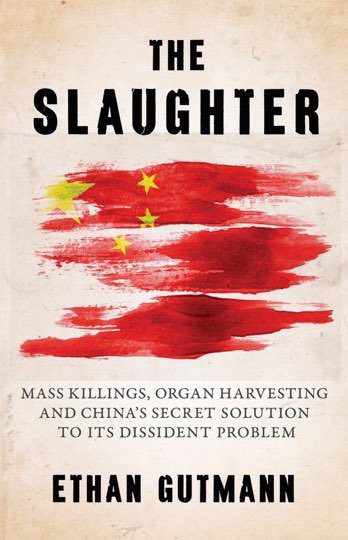 First, I ask you, and any staff present, to read my book with a critical eye. I am confident in my conclusions, in part, because I don’t go too far beyond the findings I just presented. I did not write my book to try to tell you how you should think about the Chinese state. If you believe that China is a good investment, well, perhaps it is. Yet the history I have just described is true as well. And that history is still being written, even in this room today.

What should the Wales do? I do not ask you to follow the path of divestment or trade war; I ask that you follow your values, the values we share. How can any Welsh citizen be complicit in a scheme where an innocent person will be killed so that he or she might live?

Together we have the power to stop this. The basic mechanism of criminalizing organ tourism is hardly mysterious —if you go to China and come back with a new organ, you will be incarcerated. And until the Chinese authorities provide a full accounting of this crime against humanity, I believe that this is precisely the model that Wales and the rest of the United Kingdom should follow.