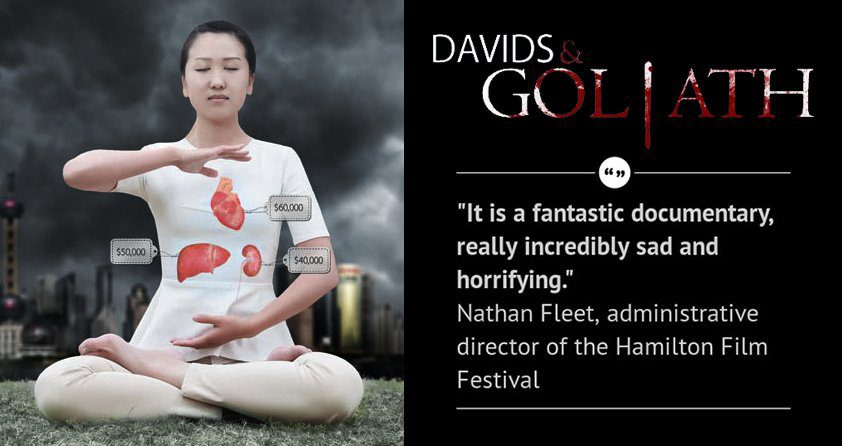 “Davids and Goliath” focuses on the investigation into organ harvesting in China by Canadian human rights lawyer David Matas and former Canadian Secretary of State (Asia-Pacific) David Kilgour. The movie contains interviews with a number of patients who received transplanted organs in China.

“It is a fantastic documentary, really incredibly sad and horrifying. It left a good impression on all of us who watched it. So it was easy to select that one as the best documentary,” the administrative director of the Hamilton Film Festival, Nathan Fleet, said.

In March 2006, two witnesses testified that practitioners of Falun Gong were being detained in Sujiatun, a suburb of Shenyang City, in northeastern China’s Liaoning Province. They said the detained practitioners were being held as a kind of live organ bank and would have their organs harvested when they matched a patient seeking a transplant. More testimonies followed afterward.

Falun Gong is a spiritual practice that’s been banned and persecuted by the Chinese Communist Party in China since July 1999. Millions of its practitioners are estimated to have been detained in China, where they typically are subjected to torture and brainwashing. Information about the persecution has been strictly censored by the CCP.

Matas and Kilgour conducted an independent investigation, collecting additional evidence and testimony, and published a report in July 2006. Following the report, the two published the book “Bloody Harvest” in 2009. “State Organs,” edited by Matas and Dr. Torsten Trey, was published in July 2012. It further explored the involvement of Chinese state institutions in organ harvesting.

The Matas-Kilgour report found that between 2000 and 2005, approximately 41,500 organ transplants were performed in China for which the source of organs is unexplained. They concluded that Falun Gong adherents were the most likely source for these transplants. The American researcher and journalist Ethan Gutmann has estimated that approximately 65,000 Falun Gong adherents may have been killed for their organs from 2000 to 2008.

Matas and Kilgour were separately nominated for the 2010 Nobel Peace Prize for their work on Chinese organ harvesting.

The documentary director, Li Yun Xiang, expressed his shock when he first learned of the crime of organ harvesting. “I found it hard to accept initially because it challenged the baseline of mankind’s morality. As time went on, more evidence was uncovered. I knew that this indeed existed.” Li said.

Li added, “I urge the audience to watch the movie calmly, from beginning to end. Think over the evidence presented in the film and use your own judgment. “

Nathan Fleet expressed his wish that the film can inspire more people in the world and stop the crime against humanity. “It’s a movie like this that needs to get out to the public, and more people to become aware of it that it’s happening and how it’s happening. That kind of thing needs to be stopped.” Fleet said.

The Hamilton Film festival took place in Hamilton, Ontario, Canada, from Nov. 3 to Nov. 9 and attracted 140 movies from around the world.

“Davids and Goliath” is one of the finalists in the Viewster Online Film Festival. The film is currently available to view for free on the festival’s domain between Nov. 13 and 27.