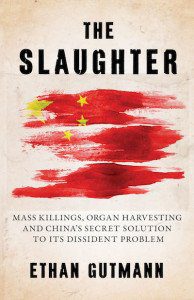 Ethan Gutmann’s new book The Slaughter (Prometheus Books, 2014) reports findings that have been anticipated by investigators and advocates worldwide. Without excessive commentary, Gutmann presents the stark reality of the lived experience of a witness found credible beyond doubt, of her dreams (in italics) and psychological state, and the deeply personal attempts of the victim to subconsciously decipher the medical testing she was subjected to while in forced labor in China. Written with meticulous scrutiny, this book makes a landmark contribution to the body of knowledge of forced organ harvesting.

With a release date of August 12th, the publisher has authorized DAFOH to print the following excerpt: Conclusion of the Wang Yuzhi case (Chapter 6, pp. 185-7)

“…A woman like Wang had become toxic waste: difficult to bury, dangerous to keep around, and problematic to release. The ambiguity of the government’s position was expressed in an increasingly common procedure: the police would suddenly free a practitioner, having tortured him or her up to imminent death. In the early days that worked like the Sicilian warning of delivering a severed head on the doorstep of a village. Now, with global websites like Minghui.org, a severed head was potentially bad publicity.

Death quotas played a role, too, Wang knew. Every center had them: a certain amount of practitioners were allowed to die, but no more. But Wang wasn’t at all sure that the quotas were as strict following the Tiananmen immolation [Editors: January 21, 2001]. Maybe the reason she had survived was that the police still stood to gain a thousand yuan if they transformed her. Split up between thirteen guys—was that seventy yuan worth getting vomited on every day? No, Wang was sure that it came down to the martyr problem. And she had family abroad, so it was potentially global martyrdom. Even the guards knew that Chinese history was full of sudden revolutions and collapses. If Falun Gong was rehabilitated and the guards were identified …Wang wrote off 75 percent of the police as just plain evil—they actually wanted you to die. But about 25 percent of the police knew that the party creates these persecutions, these disturbances. And if the party falls, Wang knew that she would be a hero, a martyr. The evil guards would be incarcerated. Maybe a few of these policemen even wanted to see the party regime fall.

Wanjia literally means “ten thousand homes.” It was a labor camp mostly for prostitution, robbery, and drugs. But Wang thinks there were over a thousand female practitioners detained there. When Wang was transferred to Wanjia, she noticed that the regime had allocated funds for a new building. It was part of the Wanjia Hospital, but it had state-of-the-art facilities. Doctors and staff were on the first floor. There was a big monitoring room on the second floor. Most people in the wards on the second floor were female Falun Gong practitioners who had been tortured severely. The third floor was populated mostly by male practitioners who had been transferred from Changlinzi Forced Labor Camp.

Wang was driving a car. She drove it straight out of the labor camp.

Wang didn’t wait for any more dreams, she simply refused all food from the moment she entered Wanjia. The cycle of force-feeding began again. But although her body was failing in every other respect, the morning routine had made her throat tougher, the muscle control slightly more accurate. So it was getting harder for them to get the tube in. … [Editorial Note: passage on Wang’s resistance to force-feeding skipped.]

She had been on hunger strike so long that she paid no attention to the examinations the Wanjia Hospital head ordered for her. Wang knew she was on the verge of death, so even in her weak voice she would ask the doctors mockingly: “What are you examining me for? To see if I am capable of doing labor?” Wang knew that even if she died, she had already won. My hunger striking has created too much trouble for them, too much manpower to deal with me. They want to get me out of here.

The doctors ignored her and went on with their blood tests, examinations of her heart, and a urine test. Then a medical team probed her body, her groin, her stomach, her eyes, and her head. She thought they were measuring her brainwaves. They would ask her if she had any history of illness. Wang said she did, and she noticed that they were talking about her AB blood type. They took her different places for more physicals, but Wang kept hearing the medical staff saying “this person is no good”; that is, she has no value. But the 6-10 Office wouldn’t just let her go. They wanted to probe her body further; they still wanted to do physicals. The medical team examined Wang four times, always for an hour or two, and a little differently each time.

On the last examination she noticed something.

Passing from one room to another, Wang found herself suddenly walking alongside some practitioners that she knew, all dressed in patient gowns like her. When the doctors saw the look of recognition, they immediately separated them. It was obvious to Wang that the doctors were scared. Wang was no good, but many of the practitioners Wang recognized in the hospital center were men—healthy, strongly built men.

Wang was looking at two 6-10 police officers. Then two things fell out from their bodies. It was two pieces of meat. Without arms or legs, just pieces of meat.

On the edge of heart failure, Wang was escorted out of the hospital to freedom.”