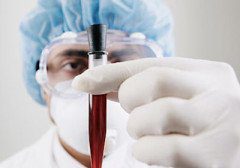 When I was held in a women’s prison, they took a sample of my blood. The label on the test tube said, “Blood-DNA.” At that time, I only knew that DNA had something to do with genes and could be used in paternity tests. I wasn’t sure why I had to have a DNA test in prison.

I recently found out that DNA screening is required for an organ transplant. I then remembered that I had read about living Falun Gong practitioners having their organs removed and sold to patients who needed organs.

It suddenly became clear to me that the things the Chinese Communist Party (CCP) officials did to practitioners who were imprisoned, including blood tests and DNA screening, were connected to organ harvesting. The results from blood and DNA tests were logged in a database so that the information could be retrieved any time someone needed to purchase an organ.

An important article was published on the Minghui website in 2013: ” Why Does the Chinese Regime Collect Blood and Tissue Samples from Falun Gong Practitioners?”It concluded: “At first people thought the CCP harvested organs only from Falun Gong practitioners who refused to give their names. For years, however, the CCP has been taking blood samples from illegally detained practitioners. The only explanation for this is that they intend to use these practitioners as a ‘live organ bank.’ Might this not help explain why some practitioners suddenly disappear?”

When I told my friends and relatives about how the Chinese officials harvested organs from living practitioners and profited from this heinous crime, some of them didn’t believe me. After I told them of my experience in prison, they were convinced.