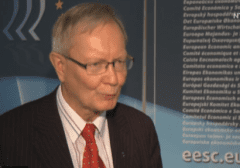 A high profile conference was held in Brussels on Tuesday for the representatives of the civil society, European Parliament, NGOs, doctors and lawyers on organ harvesting in China.

“Scandalous and unacceptable” — that is what the European Social and Economic Committee is calling the practice of organ harvesting from live prisoners of conscince in China.

[Henri Malosse, President of EESC]:
“It is really scandalous what’s happened and unfortunately is still happening in China with authorities authorizing the harvesting, stealing of organs from prisoners, people coming from minorities, from executed persons to be sold to foreigners or to local people. This is not acceptable.”

Members of the European Parliament, NGO representatives, doctors and lawyers gathered in Brussels on Wednesday to discuss follow up measures to an urgent resolution adopted last December. The European Parliament resolution condemned the harvesting of organs from prisoners of conscience in China, the majority of whom are practitioners of the peaceful spiritual discipline Falun Gong.

[Willy Fautre, Director of Human Rights Without Frontiers]:
“Nobody could doubt that this practice should be banned in China, because hundreds, thousands of prisoners are used for their organs, for selling their livers, their kidneys to other people in China but also to foreigners who come to China to find the organs that they need. This is inhuman practice.”

The co-author of the resolution against organ harvesting in China says the adoption of the document is only one step in stopping the killing in China.

[Tunne Kelam, Member of the European Parliament]:
“As we have learned what is going on behind the scenes in prisons and the Laogai system, then it’s our duty to share this knowledge. This is important not only for the victims, this is important for ourselves, because we can’t just boast that we are free and democratic when almost half of the global population are deprived of conditions of freedom and human dignity.”

The European Parliament resolution has been officially presented to the Chinese authorities. Europeans are also getting ready to deliver a strong message during new Chinese president Xi Jinping’s upcoming visit to Brussels.

[Willy Fautre, Director of Human Rights Without Frontiers]:
“I think that Catherine Ashton and other European leaders that the president will meet should in a unanimous voice say that they disapprove of that practice of organ harvesting, that urgently measure should be taken by Beijing to put an end on it. And not only to put an end on it but also to prosecute the people that were involved at any level, at the lower level or the higher level of hierarchy, that they should be prosecuted.”

The European Social and Economic Committee hopes that China’s civil society will step forward to stop the crimes perpetrated by the Chinese regime.

[Madi Sharma, President of EESC Committee on Human Rights and Democracy]:
“I would love to ask the Chinese people themselves to stand up for what is right. They know what is right. My hope is pinned on the Chinese civil society, they are such amazing people! I’ve been to China several times, I love China. But the political oppression has got to stop. And how we do that is now our greatest concern across the world.”