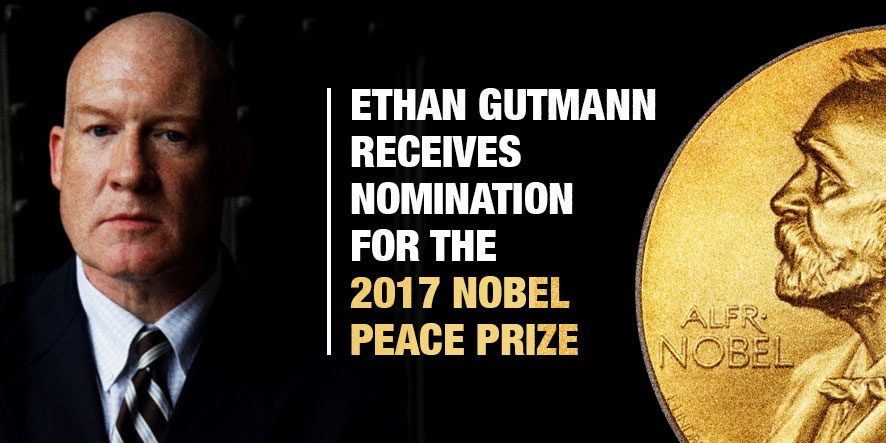 For investigative journalism and advocacy of a better China, Ethan Gutmann has been nominated for the Nobel Peace Prize.

While the Chinese medical establishment confessed in 2006 that China’s transplants depended on death-row prisoner organs, they consistently denied using religious and political prisoners and by 2015, they claimed that China was exclusively relying on voluntary organ donors. However, in the Summer of 2016, Kilgour, Matas and Gutmann released a report demonstrating that Chinese transplant volume was six to ten times higher than Chinese official estimates. Gutmann was invited to testify in Washington, London and Brussels, while Congressional and European Parliament resolutions explicitly condemned China’s organ harvesting of prisoners of conscience. With the New York Times, CNN, and the Times of London reporting on the issue for the first time, international medical societies that had been supportive of the Chinese official claims of reform, such as The Transplantation Society, publicly announced that the Chinese medical system had “appalled” the world. In short, by the end of 2016, Beijing had lost the argument.

Ethan Gutmann wishes to thank the National Endowment for Democracy, the Earhart Foundation, and the Peder Wallenberg family for funding, and Leeshai Lemish and Jaya Gibson for research assistance. He also wishes to acknowledge critical support from Doctors Against Forced Organ Harvesting, End Organ Pillaging, Benedict Rogers from Christian Solidarity Worldwide, Matthew Robertson from the Epoch Times, and actress and Miss Canada, Anastasia Lin. Finally, he would like to acknowledge the courage of witnesses throughout the world who risked it all to get the truth out.