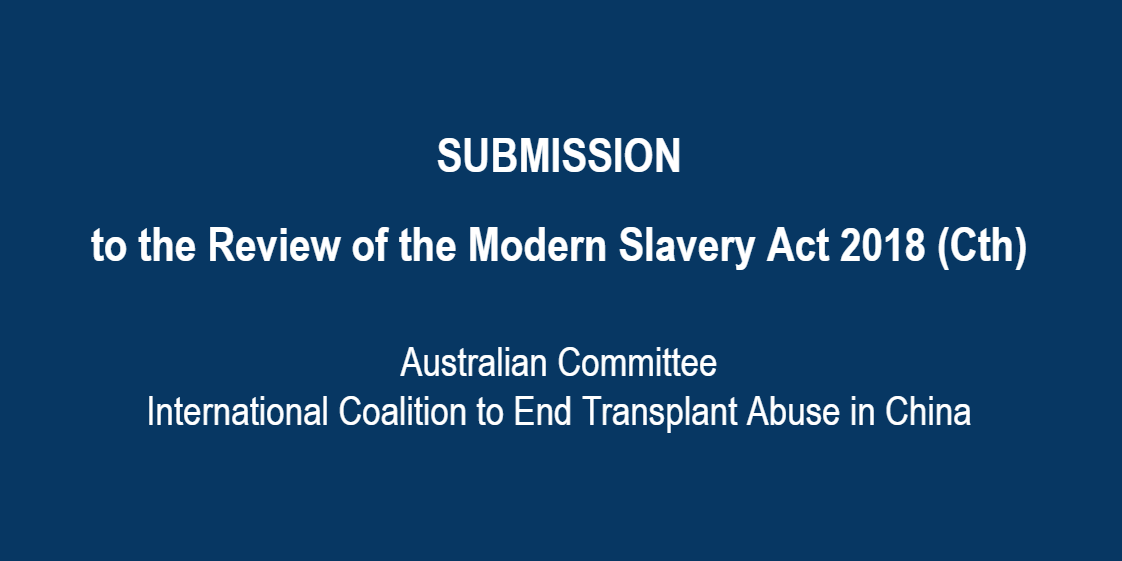 ETAC Australia: Submission to the Review of the Modern Slavery Act 2018 (Cth)

EXCERPTS FROM THE SUBMISSION

7. The Modern Slavery Act 2018 (Cth) (Act) requires that a review be conducted every three years following commencement, and that review must be complete within one year and the report to be tabled in the Australian Parliament.

8. Slavery, in all forms, is an abhorrent practice and Parliaments should be committed to making laws to end all forms of slavery, such as ‘Modern Day Slavery’, which includes, however is not limited to, human trafficking, forced labour, debt bondage, involuntary prostitution and forced marriage.

10. ETAC has been actively engaged in advocacy regarding modern slavery legislation and related issues at both the Commonwealth and New South Wales level, as they relate to organ trafficking in Australia and internationally.

11. ETAC commends the Australian Government’s commitment to addressing modern slavery, in particular organ trafficking offences. The Act has been a significant step in ensuring that Australians and Australian businesses are not directly, indirectly or unknowingly involved in offences related to organ trafficking. However, much more is needed to ensure businesses are not complicit in such offences, as the current laws are not adequate in safeguarding our nation from some of the most gregarious and heinous crimes associated with organ trafficking, including serious human rights violations.

12. The Australian Government must take all measures to ensure that Australian businesses are not associated with, or complicit in, organ trafficking related offences that occur both in Australia and overseas. For the reasons submitted below, ETAC are of the view that more can be done to strengthen the Act to ensure that this does not occur.”

79. The Australian Government adopt a due diligence approach to identify, monitor and prevent risks of modern slavery in businesses and their supply chains.

80. The Australian Government develop regulations and guidelines to assist Australian businesses to assess and undertake due diligence with respect to internment camps and forced organ harvesting in China.

82. That Australia signs and ratifies the Council of Europe Convention against Trafficking in Organs (Convention).

84. That the Australian Government consider laws similar to those in the UK and the USA to combat forced organ harvesting in China and transplant tourism.

85. That the Australian Government work with the international community to hold China accountable for its past and present human rights violations of prisoners of conscience by seeking clear and compelling evidence of the numbers of internment camps in China and evidence that forced organ harvesting has ceased as claimed by the CCP. This can only assist Australian businesses to identify modern slavery risks in their supply chain.

86. That the Australian Government pursue through the United Nations the establishment of a ommission of Inquiry to thoroughly investigate internment camps and forced organ harvesting in China, with a view to eradicating all such camps.”