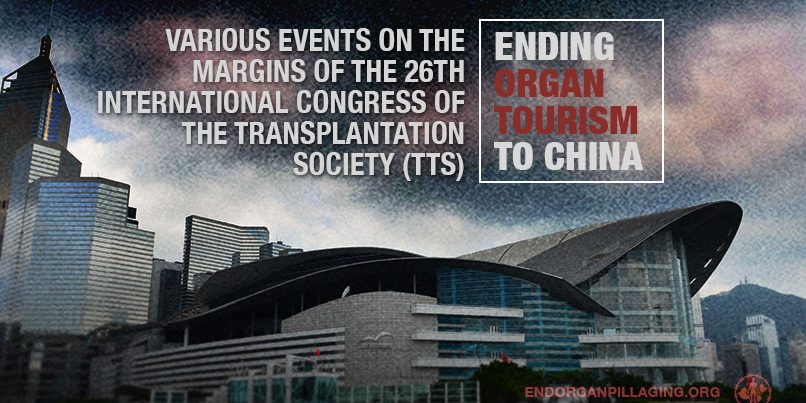 In 2006, the Coalition to Investigate the Persecution of Falun Gong in China asked David Matas and me to investigate as volunteers seemingly bizarre but persistent claims of organ pillaging/trafficking from Falun Gong practitioners. We released two reports and a book, Bloody Harvest, and have continued to investigate (Our revised report is available in 18 languages from www.david-kilgour.com). To our surprise and dismay, we concluded that for 41,500 transplants done in the years 2000-2005 alone the only plausible explanation for sourcing was Falun Gong.

Our main conclusion as of 2007 was that large-scale organ seizures from unwilling Falun Gong practitioners were occurring: “Their vital organs, including kidneys, livers, corneas and hearts, were seized involuntarily for sale at high prices, sometimes to foreigners, who normally face long waits for voluntary donations of such organs in their home countries.”

Here are three examples of the 32 kinds of evidence that led us to our conclusion that a new state crime against humanity was taking place:

☛ Investigators made many calls to hospitals, detention centres and other facilities across China claiming to be relatives of patients needing transplants and asking if they had organs of Falun Gong for sale. We obtained on tape and then transcribed and translated admissions that a number of facilities were trafficking in Falun Gong organs.
☛ A number of Falun Gong, who later got out of China, told us they were systematically blood-tested and organ-examined while in forced-labour camps across the country. This would not have been for their health, as they were regularly tortured, but was necessary for organ transplantation.
☛ We interviewed the ex-wife of a surgeon from Sujiatun in Shenyang City, Liaoning. He told her that he had removed corneas from 2,000 Falun Gong labour camp residents between 2001 and 2003. He also made None of these sources survived because other surgeons removed vital organs and their bodies were burned.

Gutmann explains how he arrives at his “best estimate” that organs of 65,000 Falun Gong and “two to four thousand” Uyghur, Tibetans and House Christians were “harvested” in the 2000-2008 period alone. No “donors” survive pillaging because all vital organs are removed to be trafficked for high prices to wealthy Chinese nationals and “organ tourists”.

The closing words of The Slaughter are addressed to responsible governments, organizations and persons: “No Western entity possesses the moral authority to allow the (P)arty to impede the excavation of a crime against humanity in exchange for promises of medical reform. As a survival mechanism of our species, we must contextualize, evaluate, and ultimately learn from every human descent into mass murder … The critical thing is that there is a history. And only the victims’ families can absolve the (P)arty from its weight.”

We three authors released an update on the two books in June of this year in Washington, Ottawa and Brussels (accessible from david-kilgour.com):

☛ It provides an examination of the transplant programs of hundreds of hospitals across China, drawing on medical journals, hospital websites, and deleted websites found in archives. It analyzes hospital revenues, bed counts and utilization rates, surgical personnel, training programs, state funding and other factors.
☛ We conclude that 60,000-100,000 transplants per year are being done across China as contrasted to the approximately 10,000 its government claims.
☛ We provide considerable evidence of an industrial scale, state-directed organ transplantation network, controlled through national policies and funding, and implicating both the military and civilian healthcare systems.

Our Update reached these conclusions:

☛ “The organ transplantation volumes in China are far larger than official government statistics indicate;
☛ The source for most of the massive volume of organs for transplants is the killing of innocents: Uyghurs, Tibetans, House Christians and primarily Falun Gong;
☛ Organ pillaging in China is a crime in which the Communist Party, state institutions, the health system, hospitals and the transplant professions are all complicit;
☛ The global intergovernmental community should establish and institution-based, independent investigation into organ transplant abuse in China;
☛ The global transplant community should connect and collaborate with the Chinese transplant only if and when set criteria are met;
☛ Organ tourism to China should not be shielded by medical confidentiality, but openly monitored;
☛ No nation should allow their citizens to go to China for organs until China has allowed a full investigation into organ harvesting of prisoners of conscience, both past and present.”

WHAT LEGISLATORS AND GOVERNMENTS CAN DO

A European Parliament resolution of 2013, featuring strengthened cooperation among Member States on the issue, was useful.

Circumstances today, however, call for additional measures, including one proposed by Dr. Torsten Trey, founder and Executive Director of Doctors Against Forced Organ Harvesting (DAFOH):

☛ National parliaments should legislate now to make illegal the purchase of trafficked organs, with such measures to apply extraterritorially to residents of their respective countries, and enact penalties for those convicted of participating in the trafficking in organs which enter their respective countries.
☛ In early 2015, the Parliament of Canada all-party House Subcommittee on International Human Rights released a statement condemning the pillaging of organs from Falun Gong. It expressed “deep concern over credible allegations that prisoners of conscience and members of religious and ethnic minority groups, including but not limited to practitioners of Falun Dafa and Uyghurs, in the People’s Republic of China, are being executed for the purposes of harvesting and transplanting their organs.”

In its call to end the transplantation of organs from living or deceased donors without consent, the subcommittee:

☛ “encourages Canadian medical professionals, scientists, researchers and their professional organizations as well as regulatory bodies to continue their efforts to put an end to illegal and unethical transplantation practices.
☛ “calls on medical and scientific professional and regulatory bodies to name, shame and ostracize individuals, institutions and their affiliates involved in the forced harvesting and trafficking of human organs.
☛ “calls on the Government of Canada to consider ways to discourage and prevent Canadians from taking part in transplant tourism, where the organs have not been obtained in an ethical, safe and transparent fashion.”

DAFOH, the international medical NGO, which has brought much international attention to this issue and has been nominated for the 2016 Nobel Peace Prize, has cautioned policy makers not to accept at face value Beijing’s latest promise to end the harvesting of organs from executed prisoners. It noted that the party-state has a lengthy record of “secrecy, misleading numbers and contradictory statements, and, despite mounting evidence and international demands to stop, the government has refused to acknowledge the illegal harvesting of organs from prisoners of conscience.”

A media release by DAFOH notes that a reduced reliance on executed capital offenders means “an increased reliance on organ procurement from prisoners of conscience. This vulnerable group, of which the brutally persecuted… Falun Gong, among others, is the primary target, is at increased risk of falling victim to the demand for forcibly procured organs”.

☛ Since an implemented regulation in 1984, China’s party-state and its agents have harvested organs from executed prisoners.
☛ David Matas analysis of the Party spokesperson Huang Jiefu’s statements on organ harvesting is accessible HERE.
☛ Chinese hospitals have been scrubbing their websites of evidence to downplay the extent of the transplant business.
☛ China is not ready to join the ethical values-based world transplant community as an equal, trusted partner. In order to take the Chinese government’s claims seriously, monitoring groups and medical organizations should demand: full disclosure of the use of prisoners of conscience as organ sources, transparency of organ sources, and access to China’s organ procurement pathways.

Dr. Jacob Lavee, a retiring member of the TTS Ethics Committee and a key figure in reforming Israel’s organ transplant laws to ban organ tourism by Israeli nationals, is boycotting this TTS Congress. As he put it to journalist Didi Kirsten Tatlow in a just-published article in the New York Times (Aug 17): “I’m a simple Jewish heart transplant surgeon and the son of a Holocaust survivor, and the reason I spend so much time on this is that I can’t keep silent in the face of a new crime against humanity.”

He added elsewhere, “I have tried and failed to persuade the TTS leadership to refrain from moving the TTS 2016 Congress, originally planned to be conducted in Bangkok, to Hong Kong…I have therefore announced to my colleagues that I will boycott the Hong Kong meeting and have called on them to follow me”

Prof. Maria Fiatarone Singh of the Sydney University Medical School stresses, “… individuals who are not free to consent can never be used as organ donors, as this not only prevents them from achieving their human potential, it completely dehumanizes them, and should be thus unacceptable to any society in the twenty-first century… It may appear an overwhelming or daunting task to stop a vast enterprise of organ harvesting, something impossible for an individual to tackle. But we must, as Carl Sandburg said “Go alone and away from all books, go with your own heart into the storm of human hearts and see if somewhere in that storm there are bleeding hearts.” Hearts are indeed bleeding amongst the Falun Gong, the Tibetans, the Uyghurs, and the House Christians in China. As physicians, we are bound by our oath to prevent harm, and this includes acting to protect those who are being harmed by others. As humans, we can do no less.”

In the meantime, regardless of proclamations from within China or beyond that reform has occurred, until they are verified by independent investigation all transplant tourism to China should be banned. Related types of engagement, such as consultancies, financial agreements, training, joint research grants, human trials and publications should be included in the ban. Outside collaborations with Chinese hospitals or surgeons who have been or are involved in unethical harvesting should not take place even if the collaboration does not involve transplantation until all has been investigated, and past and current crimes admitted and punished.