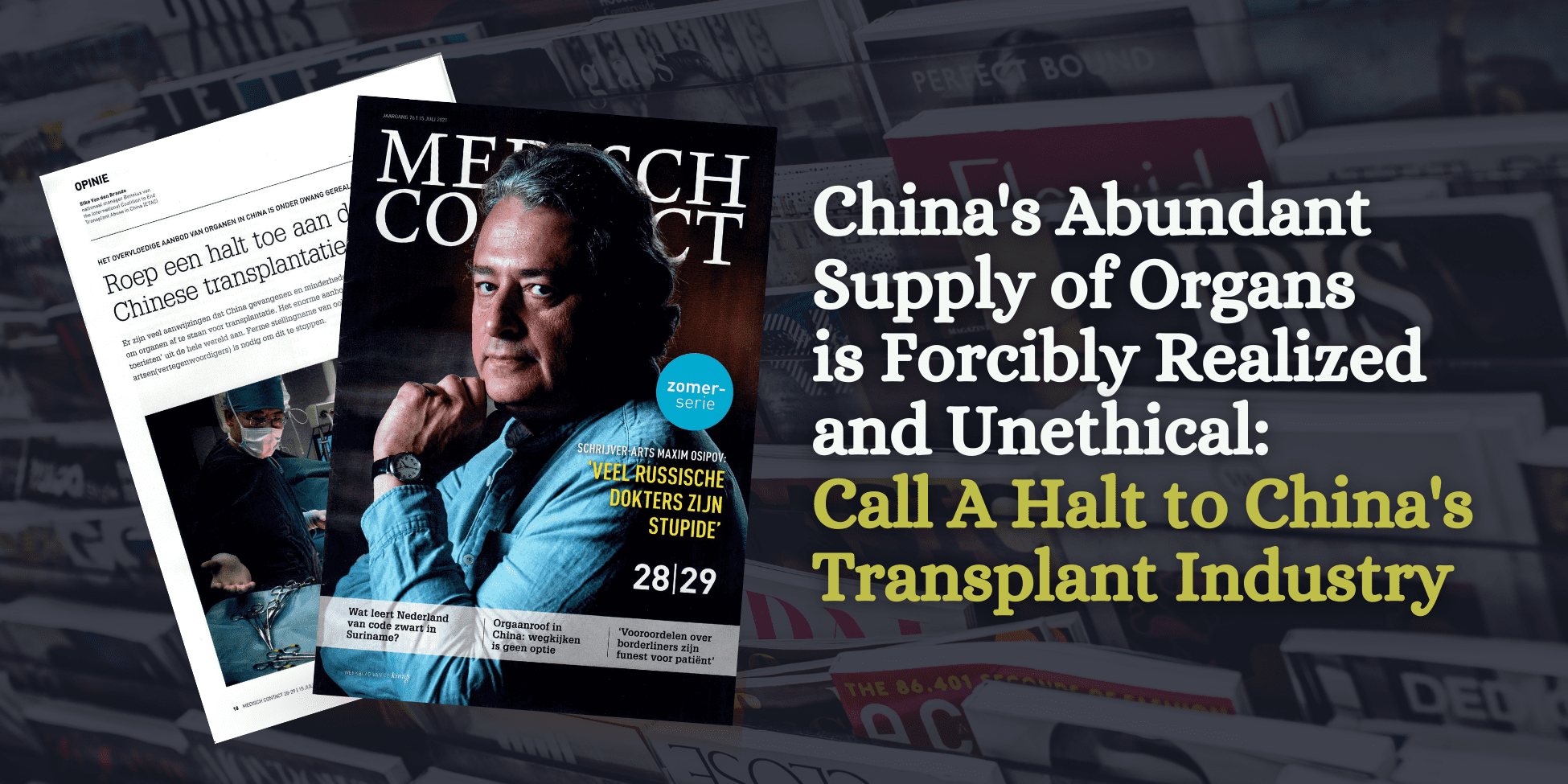 There is much evidence that China is forcing prisoners and minorities to donate organs for transplantation. The huge supply attracts “organ tourists” from all over the world. A firm stance from Dutch doctors and doctors’ representatives is needed to stop this.

Since 2006 there have been reports that the Chinese government has been killing prisoners of conscience for its large-scale, profitable organ transplant industry. Through ‘forced live organ harvesting’ (vital) organs are removed from the still living victim without consent.

In 2016, independent researchers David Kilgour, Ethan Gutmann and David Matas published an update of earlier publications on this subject (1). In a comprehensive research report, they show that from 2000 to 2015 China performed 60,000 to 100,000 transplants per year – far more than the official figure of 10,000 per year. However, a pilot project for voluntary donations only ran from 2010 to 2014. So there had to be another source of organs. After 2015, China reported more voluntary donors and more transplants, but these data could not be verified.

The researchers concluded that the organs from 2006 to 2015 came mainly from practitioners of Falun Gong, a Buddhist meditation practice, but also from Uyghurs, Tibetans and Christians. Organ harvesting is driven in China by the Communist Party and is a crime in which state institutions, the healthcare system, hospitals and transplant professionals are all complicit.

The European Parliament in 2013 and in 2016 called on member states to inform their residents about organ harvesting in China and to prosecute those involved in these unethical practices. So far, only a few EU member states have amended their laws.

Despite the evidence, including volume indicators of a burgeoning transplant industry, short waiting times, the massive supply of organs, whistleblowers, forced organ scans and blood tests in prisons, politicians, the medical profession and major human rights organizations still look away too easily, arguing that there is too little evidence.

The independent China Tribunal facilitates the debate on whether or not China is killing innocent citizens for their organs. This tribunal has legally analyzed all available evidence – up to June 2019 – of forced organ extraction from prisoners of conscience in China. Public hearings were held in December 2018 and April 2019, where more than 50 witnesses, experts and investigators presented evidence. In June 2019, the tribunal announced its summary conclusion and the full ruling followed on March 1, 2020 (2,4).

Here are the key findings:

‘Forced organ harvesting has been committed for years throughout China on a significant scale and … Falun Gong practitioners have been one – and probably the main – source of organ supply.’

‘In regard to the Uyghurs, there is evidence of medical testing on a scale that could allow them, amongst other uses, to become an “organ bank”.’

‘The tribunal has no evidence that the infrastructure associated with China’s transplant industry has been dismantled and absent a satisfactory explanation as to the source of readily available organs, and concludes that forced organ harvesting continues till today.’

‘Governments and any who interact in any way with the PRC [People’s Republic of China], including doctors and medical institutions … must now recognize that they … are interacting with a criminal state.’

Is there organ tourism from the Netherlands to China? In 2014, the police released an exploratory study on the involvement of the Netherlands and Europe in organ trafficking (see box). It states ‘that reliable information about the number of patients from the Netherlands who have organs implanted abroad for a fee is lacking. Kidney specialists do know (stories of) patients who have undergone transplantation abroad without the help of the Eurotransplant Foundation. For instance, two medical specialists reported in 2006 that several Dutch patients had undergone an organ transplant in China. (Network broadcast, January 31, 2006).

‘A male kidney patient of Chinese origin traveled from the Netherlands to China in 2004 to have a kidney purchased there implanted. His relatives in China found a living male donor for him and co-financed the cost of the transplant (10,000 to 50,000 euros). The Kidney Foundation reimbursed his dialysis treatment in China: the man had reported being on vacation in China and the Kidney Foundation reimburses dialysis treatments during vacations. The kidney patient was helped in the preparations for the transplant by his dialysis doctor in the Netherlands and also maintained contact with him during his stay in China.’

If we are to gain any insight into organ tourism from the Netherlands, legislation is needed that makes the registration of international transplants compulsory. Registration in private patient files always fails to provide transparency. The Dutch government should also introduce legislation that specifically prohibits transplant tourism.

What can be done from within the medical profession? Canadian human rights lawyer David Matas presented a number of ethical standards to address transplant abuse at a symposium organized by the Center for Bioethics and the Department of Abdominal Transplant Surgery at University North Carolina on October 26, 2020 (5). These are the most relevant.

Inform patients going to China for a transplant about the following:

Medical personnel should not refer patients to a country where

Physicians should not perform investigations in preparation for transplantation of a purchased organ.

Matas proposes to revise the principles of “The Transplantation Society” (TTS), an international organization of transplant professionals. TTS made an effort in 2006 to pressure China to stop the use of prisoners’ organs.

If these standards are adopted, physicians will be protected from complicity. But are they prepared to implement these standards, or some variant of them? Worldwide, many transplant professionals have come to believe the propaganda of the Chinese Communist Party (CCP). They repeat the CCP’s claims that organ harvesting research is based on rumor and is not verifiable, that research is a political matter, and that abuse is a thing of the past. However, claims that are not true and are all refutable.

TTS also fails to comply with its own policy of not allowing presentations that used data obtained from transplant research that used prisoners’ organs. For example, Zheng Shusen was invited as a plenary speaker at TTS’s international congress in Madrid in 2018, while his publication in “Liver International” in 2017 was withdrawn because it was not established that the organs had been voluntarily donated, even though this was claimed in this publication (6, 7).

Inviting Chinese speakers and allowing their presentations indicates that TTS believes that China is making reforms. However, a 2019 article in BMC Medical Ethics reveals systematic falsification and manipulation of official data on organ transplants in China (8).

The WHO is also taking the Chinese authorities at their word. In a July 25, 2019 debate in the UK House of Lords, the Minister of State for South Asia and the Commonwealth Lord Ahmad said, “The evidence that the WHO uses (to argue that the Chinese transplant system is ethical) is based on the self-assessment made by the country that is a signatory, and in this case that is China.” Thus, the WHO is effectively unable to determine whether the Chinese system is ethical, since no independent assessment has been made.

Therefore, it may be useful to include the broader, national and international medical associations. After all, the World Medical Association and its national counterparts are not compromised by past misdirection (5). 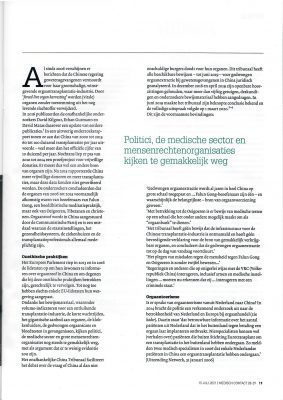 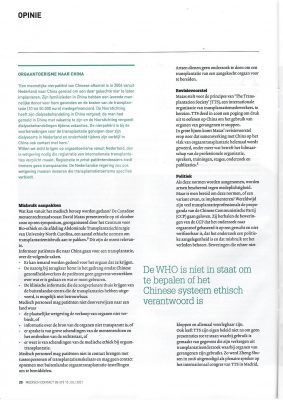 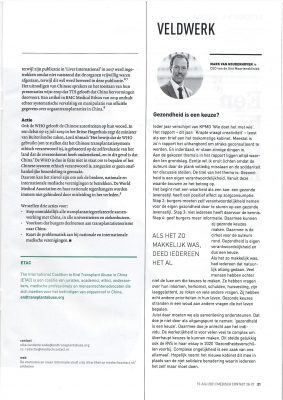