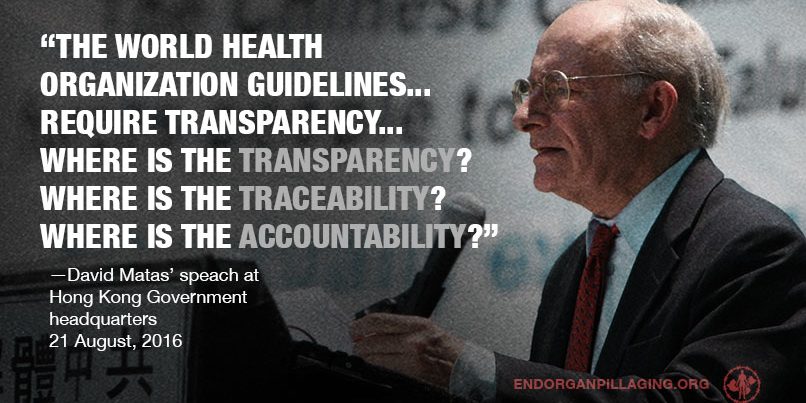 I have a question to ask the Government of China: Where do you get your organs for transplants?

You are by far the world leader in organ transplants by volume. According to an update David Kilgour, Ethan Gutmann and I released in June this year, you are transplanting between sixty thousand to ninety thousand organs a year.

Your law does not allowing sourcing of organs from accident victims – the brain dead, the cardiac alive. You restrict living donations to immediate family members. As well, you discourage live donations because losing an organ is bad for health.

So what has been the source for your huge number of transplanted organs?

This is not just my question. It was also the question of Manfred Nowak, a former United Nations rapporteur in torture. But you did not answer him.

Asma Jahangir, a former United Nations rapporteur on religious intolerance also asked you this question. But you did not answer her either.

Your initial public answer, before David Kilgour and I released our first report in July 2006, was that organs for transplants were coming from donations. Yet, at the time, China had no organ donation system.

You then changed your answer to say that most organs for transplants come from prisoners sentenced to death and then executed. Yet, that answer was unbelievable.

Prisoners sentenced to death must be executed within seven days of sentence. Yet transplant patients reported they could come to China at their convenience and get transplants in days. That meant prisoners were being killed for their organs when patients were ready for them.

There was no coordination in the timing of transplants amongst patients. As well, there was no national organ distribution system. When a prisoner was killed for an organ a patient has ordered, the other organs were wasted.

Over 60% of prisoners in China have hepatitis. That means the organs of most prisoners are unusable.

Transplants need blood type compatibility. It is impossible to match organs of every prisoner with every patient.

Put that all together and you would need to be executing 600,000 prisoners sentenced to death a year to provide 60,000 transplants. That is an unbelievable number.

Moreover, death penalty execution volumes have been going down in recent years. There is a decrease in the number of death penalty crimes.

Also you have moved the decision to execute a person sentenced to death from regional courts to the Supreme People’s Court in Beijing. That too cuts down on the number of death penalty executions.

Yet, transplant volumes have remained constant. So what is the source of all these many organs for transplants?

You now have switched back to your original answer, that everything is coming from donations. Yet, investigations we have conducted from donation centres across China for our update released this June show that donations at these centres are tiny, far below the number of transplants.

You have stated prisoners sentenced to death can donate their organs. How many organs for transplants are coming from the same old source, prisoners, now relabelled as donations?

You have instituted an official purchase and sale system for organs. Poor rural families are being paid from 21 to 39 times their annual net income for the organs of a loved one near death. What you now call a donation system is, for the most part, a purchase and sale system with hospitals as brokers. How many of what you call donations are in reality purchased organs?

When hospitals now buy organs from the poor, they may be replacing the organs which came from prisoners sentenced to death. But those organs were never enough to explain the volume.

I have an answer for the sourcing of organs in China. Your organs for transplants come mostly from prisoners of conscience – Uighurs, Tibetans, Eastern Lightning House Christians and primarily practitioners of the spiritually based set of exercises Falun Gong convicted of nothing and sentenced to nothing.

You have banned the practice of Falun Gong without reason and vilified its practitioners. You have arrested the adherents and tortured them into recantation. Those who do not recant, in the hundreds of thousands, have disappeared into arbitrary detention where they have become vast forced organ donor banks.

And tell us what your death penalty numbers were in the past and are now. You were asked that question many times at the United Nations Universal Periodic Review in 2009 and again in 2013. Canada asked you. Switzerland asked you. The United Kingdom asked you. France asked you. Austria asked you. Italy asked you.

In 2009, in response to these many questions, you were not just silent. You said, no, we will not give you those figures.

The United Nations Committee against Torture, the United States House of Representatives and the European Union Parliament have all asked you to cooperate with an independent investigation into the sources or your organs. You have refused.