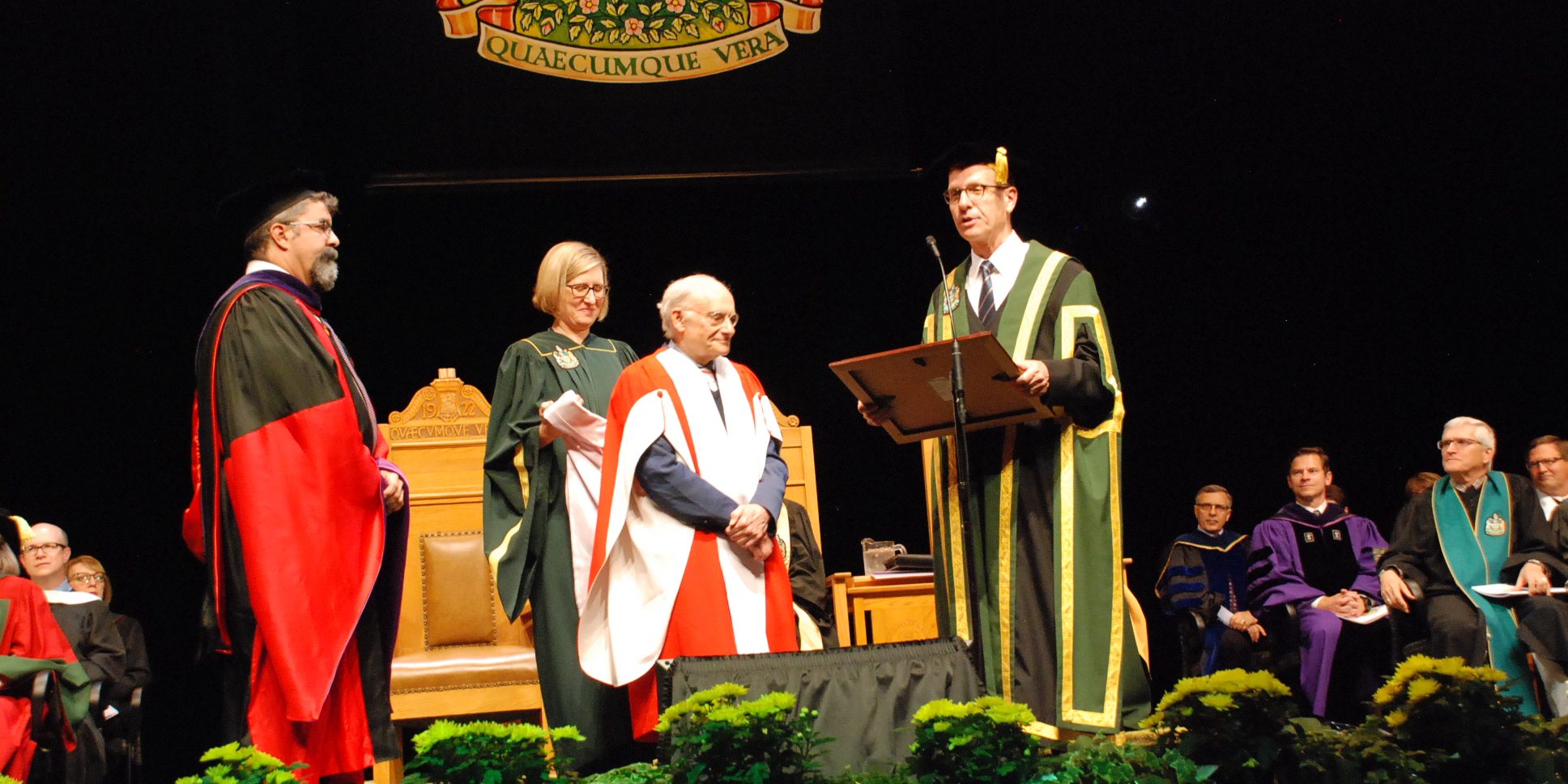 The University of Alberta awarded David Matas an honorary doctor of laws degree on June 12, 2018.

In his convocation address, Dr Matas spoke of the importance of pursuing human rights.

“There are some subjects which should unite us all, no matter how specialized we get. One of those is human rights. Human rights become meaningless if they are left to experts. Human rights belong to each and every one of us, simply because of our common humanity. Unless we assert those rights, they will wither and die.

Human rights violations are a spreading stain. Unless we stop them before they get to us, we will become victims. If we wait for that, it will be too late. We must exercise human solidarity when there is still enough of us who are not victimized for that solidarity to matter.

We must combat human rights violations wherever and whenever they occur.   We, of course, must be focused on our immediate surroundings. To ignore them would be hypocrisy. But we must also not forget the far away.

Concern about those geographically, linguistically, culturally, ethnically or spiritually different from us bridges the gaps and emphasizes our common humanity. As well, in all too many places, outsiders must speak for victims because local human rights advocates are powerless, because, through their advocacy, they become victims themselves.

Dr Matas drew attention to the important role the University of Alberta has played in regards to the need to protect refugees and to combat cross border organ transplant abuse. He also urged affirmative action.

“I will give here just two examples – the need to protect refugees and to combat cross border organ transplant abuse. Because I am here at the University of Alberta, I want to draw to your attention the exemplary role that this University has played for both.

Rights of refugees are commonly asserted in theory but denied in practice. Some of this is hypocrisy, the unwillingness to translate a theoretical concern for refugees into real numbers, particularly when the numbers are large.

The University of Alberta has played a signal role in this area by attempting to shed light on the refugee experience. For instance, the University in January 2016 brought together government and NGO representatives and academic experts to discuss in a public forum Canada’s approach to the Syrian refugee crisis. The University has also posted online a refugee lecture series to enhance information about refugee medical care.

When it comes to combating organ transplant abuse, the ignorant have gone astray. Soviet abuse of psychiatry for political oppression led to global ostracism of the Soviet psychiatric profession until they cleaned up their act. In contrast, the global transplantation profession, in response to overwhelming evidence of the killing of prisoners of conscience in China for their organs – primarily practitioners of the spiritually based set of exercises Falun Gong, but also Tibetans, Uighurs and House Christians – has, for the most part, gone in the opposite direction, favouring what they call engagement. Communist propaganda easily distorts these efforts at engagement as global endorsement of their existing system.

Again, here the University of Alberta has stood out. The University since 2016 offers a Young Physician Training Program in partnership with the Chinese Zhejiang University School of Medicine Fourth Hospital. The University Clinical Islet Transplant Program, under the leadership of Dr. James Shapiro, has refused to participate. Islets are found in the pancreas. Their transplantation is a form of treatment for diabetes.

Dr. Shapiro familiarized himself with the human rights research into transplant abuse in China. He could not see his way through to a regulatory watertight oversight that would protect him and his Edmonton Protocol team from inadvertent unethical conduct. So, he rejected the collaboration. The University now collaborates with other components of Zhejiang hospital, but not with islet transplantation.

Peace, of which respect for human rights is a component, like war, is too important to be left to the experts. Yet, we court disaster if we ignore accumulated knowledge. Act on human rights. In doing so, do not turn a blind eye to the existing human rights information.”