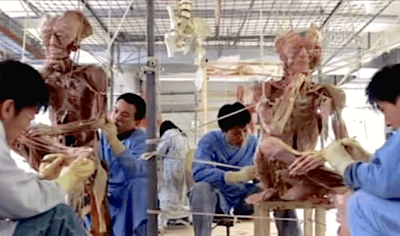 Recently, a Chinese Korean Mr. Li gave inside information about the former Dalian corpse plant; which involved former Chongqing Secretary, Bo Xilai and his wife, Gu Kailai. Mr. Li said that he had been working at this factory for one and a half years.
Recently, a Chinese Korean Mr. Li said he personally experienced live organ harvesting and could testify when he saw in Seoul, the Falun Gong banners exposing organ harvesting and selling corpses.

Former corpse factory worker Mr. Li: “I can tell this plant was Bo Xilai wife’s plant. Once Bo was arrested, it was closed. I had been working there one and a half years. Nobody was allowed to enter without the specific card. Those allowed to enter the factory gave up our cell phones. Those who did not get the cards, had to pay up the phone. All were medical school graduates, wages were very high. I was responsible for assembling the livers. I dare to testify on this matter. ”

Mr. Li is currently working in South Korea. He said that normal people could not emotionally bear to be
in this corpse plant.

Mr. Li: “There was a special work shop to handle the dead: including boiling the dead like a bubbling pig in a big pond full of formalin syrup. They put two good specimens into one pool, but worse 4, 5 specimens into one pool. After that, they extracted all water and oil from the dead and injected chemical material. Eventually, it’s not like a human, but a tasteless and colorless plastic…..some are pregnant women, you know?”

Mr. Li said that all corpses were transported illegally.

Mr. Li: “A truck normally came with 4 or 5 corpses in plastic bags. If I could photograph, I would specially provide it to the Epoch Times. ”

It was peak time of the persecution of Falun Gong when the former Chongqing Party Secretary Bo Xilai ruled Liaoning. There were two large corpse plants in Dalian.

The report said the original factory is surrounded by overgrown weeds because the original owner has gone. The door is sealed with “February 29, 2012 closed”.

It’s said the plastic bodies from Dalian were exhibited in more than 20 countries with nearly 20 million visitors.

The Dalian Hoffen Bio-Technique Co. is one of the plastic chemical plants. Its general manager, Sui Hongjin also confessed to International Investigators that the bodies were from Public Security.

Investigator: Yes, she had two corpses factories in Dalian. She sold a complete body for a million dollars and an organ removed corpse for 800 thousand dollars. 610 Director: she sold not only Falun Gong practitioners.

Since 1999, Liaoning city was the most severe in its persecution of Falun Gong during Bo Xilai’s tenure.