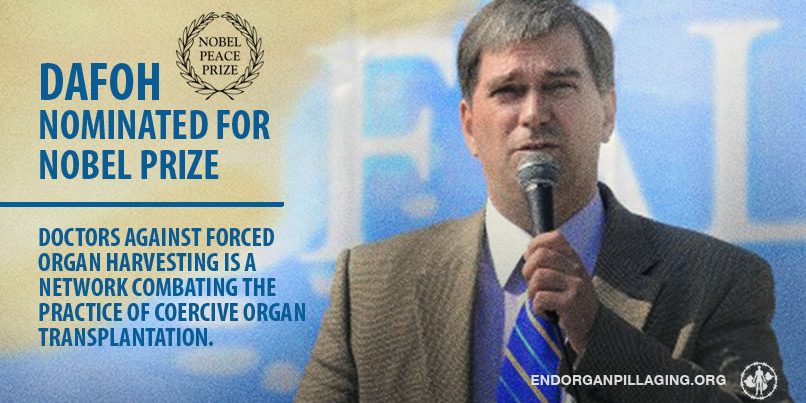 Doctors Against Forced Organ Harvesting, a network of doctors and surgeons who concern themselves with ending the practice of coercive organ transplantation, was nominated for the Nobel Peace Prize recently, according to a press release by the group and one of the individuals who nominated them.

“DAFOH is pleased to announce that we have been nominated for the 2016 Nobel Peace Prize,” the executive director of the organization, Dr. Torsten Trey, wrote in an email, using the acronym of the nonprofit, which is based in Washington, D.C.

“The nomination, of which we were informed just a few days ago, is a recognition of our efforts to protect ethical standards in medicine and to address a topic about which few have dared to speak,” he said.

Nominations for the prestigious prize may only be made by parliamentarians, professors, jurists, and similar persons.

Those who wish to nominate an organization or individual for the prize must write to the Norwegian Nobel Committee with their nomination and reasoning.

In the case of DAFOH, one of the nominators was UK parliamentarian Dr. Liam Fox, a member of Parliament for North Somerset, and the former secretary of state for defense. Others who nominated the group chose to remain anonymous.

“Dr. Fox thought it was a very, very worthy cause,” a representative for Dr. Fox’s office said in a telephone interview.

It goes on to note a number of the activities DAFOH has engaged in since it was founded, including: the initiation of a petition to the United Nations High Commissioner for Human Rights in 2013 that gained 2 million signatures; becoming a base of expertise for the media to draw upon in reporting on organ transplant issues; its regular publications that address transplant abuse in China and around the world, including a comprehensive, quarterly newsletter.

The focus of the efforts of Doctors Against Forced Organ Harvesting, and its expertise, lies in shedding light on what it said is the system of coercive and abusive organ transplantation in China. This system, run by military and civilian hospitals in cooperation with the security apparatus, is believed to have heavily targeted the population of imprisoned practitioners of Falun Gong, a traditional spiritual discipline that has been targeted for elimination by the Communist Party since 1999.

“The effort of DAFOH to raise awareness and stop the forced organ harvesting from prisoners of conscience and Falun Gong practitioners is truly a significant contribution to peace and human rights in the world,” Fox’s nominating letter stated.

“I do hope you will seriously consider DAFOH for the 2016 Nobel Peace Prize.”

Dr. Trey, in his email, emphasized the role that DAFOH has played in furthering awareness of the abuses in China, which eclipse in scale and state-involvement the sorts of abuses found elsewhere.

“Since the news of China’s forced organ harvesting of Falun Gong practitioners and other prisoners of conscience first broke 10 years ago, DAFOH has been at the forefront of exposing these crimes and calling for full compliance with international standards for ethical transplantation,” Trey said.

“Our global membership of medical doctors, nurses, and other professionals in medicine, ethics, and government has reached over 7,000, as the facts of China’s dubious transplantation practices have been revealed.”