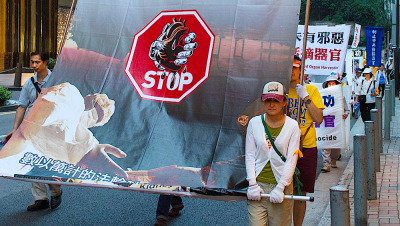 By Luo Ya, Epoch Times

The Chinese National Transplant Congress was held in a strangely low-key atmosphere, with relevant information only publicly available at the last minute. In the lead up to the conference, the location was changed to the city of Hangzhou and the date pushed back to Oct. 30.

In the weeks prior to the conference, the World Organization to Investigate the Persecution of Falun Gong released two consecutive reports on the CCP’s live organ harvesting atrocities.

The disclosure of this new evidence shocked the public in China that was able to access the news. Some Chinese people even directly protested the Congress, saying that they believed many of the participants are in fact butchers and executioners dressed in white coats.

The opening session was subdued, and some of the speakers’ information wasn’t available.

The agenda and other related information were published on the Chinese National Transplant Congress’s webpage on Oct. 30—the first day of the conference. According to the agenda, among the 10 speakers in the opening session, only 7 physicians’ names were available, and the names of the other 3 were not disclosed.

Two of the unnamed speakers are identified as CCP officials from Zhejiang University and the Red Cross Society of China respectively. As to the last speaker, only “Official” is shown on the agenda, so no outsiders would know who the speaker is, and what his or her rank is. Apparently, this official doesn’t want to get involved openly in the congress.

This National Transplant Congress was originally scheduled for Sept. 25-27 in Chongqing. But the organizer suddenly announced on August 28 that it would be postponed to Oct. 30, and would be held in Hangzhou, the capital of Zhejiang Province.

In the notice announcing the changes, the Organ Transplantation Branch of the Chinese Medical Association only said that they were “due to some special reason.” So outsiders were unable to know the true reasons for the moves.

Information about the Congress was only available in Chinese on the official conference Website. The website wasn’t updated until Oct. 29, and the mass media in China didn’t cover the relevant news either.

Although the Transplant Congress was kept extremely low-key, some netizens in China were still concerned about the event and discussed it online.

One Netizen commented, “Now the whole world knows that hospitals in China have a lot of butchers under their white coats. If they still held this meeting in a public way, it would only expose their ugliness.”

There was a post on one mainland social network site that compared the waiting times for getting an organ transplant in the United States and China.

The comparison shows Chinese hospitals have very short waiting times. For example, according to the U.S. Department of Health and Human Services, the average waiting time for a kidney transplant is 1,121 days, a liver transplant 796 days, a heart transplant 230 days, and a lung transplant 1,068 days.

One lady from eastern China’s Jiangsu Province commented that because of the Chinese Communist regime’s bad influence, many Chinese people are bent on profit only and are not afraid of doing evil. There are no moral constraints for the doctors in China.

One Shanghai resident commented about the meeting as, “It is a meeting about killing and stealing hearts, a meeting of demons. I strongly protest it!”

A resident from northeast China’s Dalian City posted a message saying, “In the past the accusations of organ harvesting from outside of the great firewall were condemned as slanders, now many facts inside China constitute indirect evidence to verify the accusations.”

Some responded saying, “Things happening in the dark corners will be exposed sooner or later. Besides, the transplant cannot be completed by one person. The Tianjin No.1 Central Hospital has already become the focus of the world’s media. What is the source of the organs? It is always a mystery, but the answer will definitely be unveiled. It is just a matter of time.”