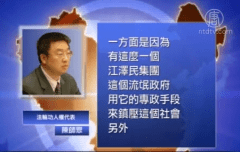 Exposure is growing about the Chinese Communist Party’s (CCP) organ harvesting from living Falun Gong practitioners. Nearly 1.5 million people globally have signed a petition calling for the CCP’s live organ harvesting practices to end. In China, people have also started a wave of petitions, and are demanding an investigation into these crimes. In Shijiazhuang, Hebei Province, as many as 11,015 Chinese have signed a petition.

Following persistent exposure and clarification about the CCP’s persecution of Falun Gong, more Chinese people are becoming aware of these crimes. A petition to end live organ harvesting has rapidly spread across China. In mid-December 2012, 310 people in China signed a petition to end organ harvesting, and a call to investigate the involvement of CCP officials Zhou Yongkang and Bo Xilai. At the end of 2013, a further 6,259 people have also signed the petition. During 2014, petitions against live organ harvesting continue to grow inside China.

In Shijiazhuang City, over 11,000 people have supported the petition. Upon learning about what was happening, many people were shocked and angered. They have not only signed the petition, but have also denounced the CCP and its associated organizations. Dr. Chen Shizhong, a Falun Gong human rights representative, commented on what is happening. As more people stand against live organ harvesting, former CCP leader Jiang Zemin’s campaign of “inciting social hatred” to maintain the persecution of Falun Gong begins to lose power.

Chen Shizhong, Falun Gong human rights representative: “Jiang Zemin’s faction, along with the CCP regime, suppress the society by dictatorship. Information censorship has restricted people from knowing these crimes, which have been conducted for many years.” Outside China, Doctors Against Forced Organ Harvesting (DAFOH) launched a global petition in July 2013. By end of November, there were a total of 1,487,828 signatures that had been collected from around the world. These signatures have had a huge impact.

On December 12, 2013, European Parliament passed an emergency motion. The motion called for the CCP to immediately stop organ harvesting from prisoners of conscience, of religious beliefs, and of ethnic minorities. On March 5 this year, the Italian Senate Human Rights Commission unanimously adopted a resolution. This asked the Italian government to urge the CCP to immediately release prisoners of conscience, including Falun Gong practitioners. It also called for a full investigation of the CCP ‘s crime of live organ harvesting.

On February 26, the Illinois House of Representatives unanimously passed the Illinois No. HR0730 motion. It called for the CCP to immediately stop the persecution of Falun Gong practitioners. It strongly urged the U.S. government to investigate organ transplants in China. It also urged for an end to organ harvesting from living Falun Gong practitioners. Since March 2006, when evidence of organ harvesting in China first came to light, many witnesses have indicated that the order for these acts came from Jiang Zemin. These witnesses include transplant doctors, journalists, military doctors, and police officers on guard during organ harvesting procedures.

Hon. David Kilgour, former Canadian Secretary of State for Asia-Pacific, and David Matas, a senior international human rights lawyer have conducted a series of independent investigations. They have gathered 52 separate pieces of evidence that indicates organ harvesting continues to exist in China today. Investigations by Ethan Gutmann concluded that approximately 65,000 Falun Gong practitioners died from organ harvesting between 2000 and 2008. Mr. Xu is a resident of Baoding City, Hebei Province. He indicated that as a Chinese citizen, he firmly opposes organ harvesting and strongly opposes killing people to silence them.

Mr. Xu: “This is not just a matter of Falun Gong, but one of humanity. I do not practice Falun Gong, but I am concerned about this matter. Which ever party it is, you just can’t conduct live organ harvesting.” Live organ harvesting is only part of the CCP’s crimes. Hong Kong newspaper, Apple Daily, reported in October 2012 about live organ harvesting. It also indicated little known information that Bo Xilai’s wife, Gu Kailai was directly involved in the operation and establishment of a global network of organ sales. Apple Daily also reported that the CCP had known about Bo Xilai’s organ harvesting and trafficking. When the Wang Lijun incident took place, the regime quickly seized the plastination facilities that are involved in these crimes. After seeing the pictures of human specimens exhibited overseas, people were shocked.