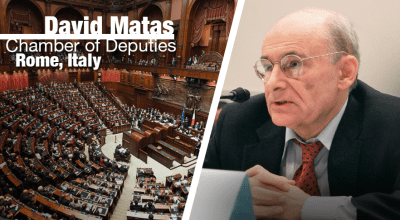 I wrote a report with David Kilgour in June 2006 which concluded that prisoners of conscience in China, practitioners of the spiritually based set of exercises Falun Gong, were being killed for their organs which were being sold at high prices to transplant patients. We produced a second version in of our report in January 2007 and a third version in book form under the title Bloody Harvest in November 2009.   Our report prompted the founding of a non-governmental organization Doctors against Forced Organ Harvesting or DAFOH. I and Dr. Torsten Trey, the founder of DAFOH, co-edited a book of essays on organ transplant abuse in China published in August 2012 under the name State Organs.

Going through all relevant evidence to come to an informed conclusion on the killing of Falun Gong for their organs is a time consuming task and it is unrealistic to expect everyone interested in the issue to do that. That does not mean though that those who have neither the time nor inclination to engage in this work should to nothing.

The onus does not fall on me to show that Falun Gong practitioners are being killed for their organs. I do not have to explain where China gets its organs for transplants. China does. It falls on the Government of China to explain the sourcing for their organs.

China, after the persecution of Falun Gong took hold, became the country with the highest volume in the world for transplants after the United States. The Government initially stated all its organs were coming from donors, even though China did not have an organ donation system. The Government then shifted, saying its organs were coming from prisoners sentenced to death and then executed. However, the Government refused and refuses to this day to release death penalty statistics. The number of persons sentenced to death and then executed to generate the volume of transplants China is producing would have to be in the order of 100,000 executions a year, far and above the largest NGO estimates of executions.

The conclusion to which I and others have come that Falun Gong are being killed for their organs is not just based on numbers. Rather the conclusion is based on a number of evidentiary trails; it is founded on consideration of all the evidence all together.

One foundation for the conclusion is that the precautions, both legal and ethical, that should be in place to prevent the abuse, both in China and abroad are not in place. In China, there is a lot of money to be made from the sale of organs, a huge organ donor source which is dehumanized by its jailers, and nothing to prevent unethical behaviour. This combination became a recipe for abuse.

Since the first version of our report, the medical profession has introduced, internationally and in various countries, ethical standards to prevent foreign complicity in Chinese abuse. These standards need to be adopted more comprehensively, in Italy and elsewhere.

Internationally, there are these professional standards worth noting:

Nationally, there are these standards worth noting:

None of these standards addresses directly the avoidance of complicity in the killing of Falun Gong for their organs. The only exception is the Canadian which states that sources may be killed for their organs. Yet, all the policies set out below are relevant.

From the sources listed above, I draw the following principles which I suggest every professional medical body, local, regional, national and international, should adopt.

1) Every national and regional professional association and society should develop a written ethics policy on the clinical practice of transplantation, including the subject of executed prisoners. (TTS)

2) There should be no recovery and no complicity in the recovery of organs or tissues from executed prisoners. (TTS and WMA)

4) Medical personnel should not go abroad with a patient for organ transplantation and receive compensation (Taiwan).

5) In the case of a referral for an organ transplant outside the country from any donor, a doctor would be acting unethically if he made the referral without ascertaining the status of the donor or following these principles:

6) Medical personnel should not, with or without charge, introduce patients to intermediaries or organ transplant brokers (Taiwan).

7) Medical personnel should not, with or without charge, refer patients to a country where either

– the local law does not prohibit the sale of organs,

– information on the source of organs is not transparent,

– there are known violations of medical ethics in organ transplantation. (Taiwan)

8) There should be no advertising (including electronic and print media), soliciting, or brokering for the purpose of transplant commercialism, organ trafficking, or transplant tourism. (Istanbul)

10) The practice of donation and transplantation requires oversight and accountability by health authorities in each country to ensure transparency and safety. (Istanbul)

11) Mechanisms for transparency of process and follow‑up should be established. (Istanbul).

12) The organization and execution of donation and transplantation activities, as well as their clinical results, must be transparent and open to scrutiny. (WHO)

13) All patients with end‑stage organ failure who are candidates for transplantation should receive information about the dangers and ethical concerns regarding transplant tourism and organ trafficking. (Canada)

14) Patients interested in purchasing a solid organ transplant should receive pre-transplant counselling from a health care professional with expert knowledge of the pre-transplant and post-transplant medical and surgical management of transplant recipients.(Canada)

15) Patients should be told that individuals who purchase transplants overseas are at an increased risk for complications, including death, organ failure, and serious infections. (Canada)

16) Patients should be told that those who obtain a transplant overseas may receive sub-optimal care even when they return because:

– Without documentation of the surgical procedure, post-transplant course and complications, health care providers may not have the necessary information to provide optimal care, diagnoses may be delayed, and the patient’s well- being may be compromised.

– health care providers may not be able to obtain reliable clinical information from the centres which performed the transplantations.

– the information which is obtained cannot be trusted or verified.

– health care providers have no ability to validate the accuracy of any documents that may be provided by individuals or centres engaging in transplant tourism and have no professional relationship with individuals who may be performing illegal activities in their countries.

– Uncertainty regarding the details of commercial transplantations may compromise individual patient care.

– Patients are transferred before they are clinically stable:

– Immediate post-transplant care is complicated and is best directed by the original transplant team. (Canada)

It is worth here noting a bit of what Malaysian doctor Ghazali Ahmad wrote in the book State Organs, in the chapter he contributed titled “The Spoils of Forced Organ Harvesting in the Far East”. He set out:

“Even though the number of renal transplant patients returning from China had dwindled significantly since 2006 (see table 1) the management of such patients became unfortunately more complicated and challenging. The main reason for this circumstance is due to the fact that ALL new returning transplant recipients from China since 2006 no longer bring along with them any form of documentation to guide the clinicians in Malaysia to provide optimal follow up care. Such a practice is a part of deliberate attempts by the syndicate members to remain anonymous, unaccountable and leave absolutely no trace of their illegal activities. However, the absence of any information on the perioperative as well as postoperative findings, clinical summary, necessary information on the type and dose of the induction agents given, the best serum allograft function achieved and the lack of many other standard test results had caused a serious gap in the ability of the local clinicians to deliver a quality and effective care deserved by such patients who had not only risked their lives and parted with their hard earned life savings to obtain a new, safer and better quality of life but now faced real and potentially serious transplant related complications.”

17) Patients should be educated about the harms that may come to those who provide organs through transplant tourism. (Canada)

18) When it comes to transplant tourism into China, patients should be advised that organs may have been taken by force, and individuals may even been killed to obtain their organs. (Canada)

19) Patients should be advised that the transplant tourism industry relies on secrecy, making it is impossible to determine whether donor information provided by organ brokers, who are motivated by financial gain, is accurate. (Canada)

20) Physicians should advise patients, where this is the case, of their unwillingness to provide post-transplant care for patients who obtain transplants through transplant tourism.(Canada)

21) Insurance coverage for medical or surgical expenses should not be extended to patients in jurisdictions outside the country related to the transplantation of an organ obtained through transplant tourism. (Canada)

22) Nationals who travel abroad for organ transplants provided on a commercial basis should not be allowed to get a free supply of immunosuppressant drugs from government hospitals. (Malaysia).

23) Health care providers should inform patients that, where this is the case, insurers will not extend insurance coverage for medical or surgical expenses incurred by patients in jurisdictions outside the country related to the transplantation of an organ obtained through transplant tourism. (Canada)

25) Physicians should not prescribe medications or otherwise facilitate obtaining medications which will be used during the transplantation of a purchased organ. (Canada)

26) Individual physicians may elect not to provide medical records to patients if they believe the information will be used in support of an abusive transplant performed in a system which violates international human rights standards and that there is a significant risk of harm to the patient or organ source. (Canada)

27) In non-emergency situations, individual physicians may elect to defer to another physician care of a patient who has returned from transplant tourism abroad. In such situations, the physician should ensure that the patient has reasonable access to the proposed alternative care provider. (Canada)

28) Only those doctors who conduct clinical practice ethically should be permitted to become members of professional associations.(TTS)

29) Collaboration amongst transplant professionals in different countries must protect the vulnerable, promote equality between donor and recipient populations, and not violate other basic organ transplant principles. (Istanbul).

30) Collaboration within clinical studies should only be considered if the study does not violate ethical principles, for example through the sourcing of organs or tissues from executed prisoners. (TTS)

32) Clinical scientific studies which analyze patient outcome or entail therapeutic or mechanistic approaches should be considered for acceptance only if they have been performed under ethical principles. (TTS)

33) Presentations of studies involving patient data or samples from recipients of organs or tissues from executed prisoners should not be accepted. (TTS)

35) Hospitals should not accept for clinical or pre-clinical training any candidate for training in transplant surgical techniques unless the candidate accepts the membership policy and code of ethics of The Transplantation Society (New South Wales, Australia).

The ability of transplant professionals outside of China to stop the killing in China of prisoners of conscience for their organs is limited. Yet, there are two practical steps they can take. One is to do nothing to be complicit in the Chinese abuse. The second is to avoid giving any status to the abusers.

Adopting and then following the policies set out above would achieve both those goals. They would avoid complicity. They would also avoid giving respectability and status to the Chinese transplant profession in advance of conformity to international ethical standards.

ETAC Australia: Submission to the Review of the Modern Slavery Act 2018 (Cth)
December 8, 2022
Go to Top