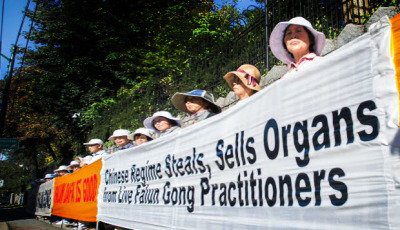 In March 2006, the first word about live organ harvesting escaped China, when a surgeon’s ex-wife fled from China to reveal that Chinese authorities in a concentration camp in Sujiatun, China murdered Falun Gong practitioners for their organs. She stated that the organs are removed at a nearby hospital (the Liaoning Provincial Thrombosis Hospital of Integrated Chinese and Western Medicine) while the practitioners were still alive. Her husband said that most of them were strong and healthy and breathing when their organs were removed. Her husband confirmed that the prisoners at the Sujiatun camp were all Falun Gong practitioners, and since the Chinese Communist Party deemed the deaths of Falun Gong practitioners as “suicide,” the hospitals were free to remove organs without formal procedures.

China carries out the second largest number of organ transplants per year in the world, and the waiting time for a vital organ there is only 1 to 4 weeks, compared to a few years here in the U.S. But China doesn’t even have an effective voluntary organ donation system.

The Chinese Communist Party has confirmed that it uses the organs from death-row prisoners for most of transplants in order to fuel China’s growing organ-harvesting business. However, as journalist Ethan Gutmann reveals in his new book, “The Slaughter: Mass Killings, Organ Harvesting, and China’s Secret Solution to its Dissident Problem” (Prometheus Books),” new research indicates that while the execution rate in China has remained constant (according to Amnesty International), horrifyingly, there have been tens of thousands of unexplained organ transplants. Gutmann meticulously documents the treacherous history of these transplants, exploring the rise and the Chinese Communist Party’s persecution of Falun Gong.

In 1992, Mr. Li Hongzhi began to teach “slow, meditative exercises to anyone who was interested.” The popularity of these exercises blossomed, and soon, in 1995, Falun Gong had millions of followers, in part because of Falun Gong’s simple but powerful Buddhist core: truthfulness, compassion, and forbearance. Gutmann explains that the group was initially well-received with the Chinese public. However, the numbers grew, matching the size of the Communist Party itself. Despite the fact that Falun Gong was not a political movement, the Communist Party grew fearful that Falun Gong was a threat to its power. Starting in 1999, the state arrested people for the practice, beating and spilling blood, the beginning of the persecution.

Gutmann chronicles the increasing number of arrests during this time, and notes that in Harbin alone, an astounding 10,000 practitioners had been detained. At this juncture, Gutmann reveals that practitioners were faced with two choices: sign a document renouncing Falun Gong, or remain detained. When in prison, practitioners were beaten, tortured, raped and murdered. Gutmann estimates that by 2005, at least 3,000 practitioners died from torture, and over 1 million of them were imprisoned.

Distinguished Canadian human-rights attorney, David Matas and former Canadian Secretary of State for Asia-Pacific, David Kilgour, published “Bloody Harvest: Organ Harvesting of Falun Gong Practitioners in China” (Seraphim Editions) in 2009. Their investigation concluded that the allegations were true and that tens of thousands of Falun Gong practitioners have been killed for their organs. Gutmann estimates that approximately 65,000 Falun Gong adherents may have been killed for their organs from 2000 to 2008.

Gutmann relays more terror stories, detailing that Dr. Jacob Lavee, a cardiac surgeon and director of the heart transplantation unit at the Sheba Medical Center in Israel, had a patient who found a transplant opportunity in China in 2005. The organization arranging the transplant informed Dr. Lavee that there was a specific date for the heart transplant. This ruled out an accident victim; rather, it was a “prescheduled murder.”

While Falun Gong practitioners remain the biggest source of prisoner-of-conscience live organ harvesting, it is important to remember that Tibetans, Christians, and Uighurs are also persecuted in this sickening manner. There is no way to sugar coat this: the Chinese regime, appallingly, has sunken into mass murder in order to suppress religious and spiritual people.

Carlen Zhang is a lawyer in Detroit interested in the progression of human rights.