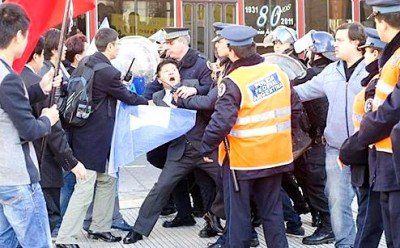 BUENOS AIRES, Argentina–A gang made up of members of local Chinese associations attacked Argentine practitioners of the Falun Dafa spiritual discipline (also known as Falun Gong) who were protesting on Friday, July 18, as the visit of Chinese leader Xi Jinping began. The protest was about the brutal persecution of  Falun Dafa practitioners in China who are imprisoned, tortured, sent to labor camps, and have been victims of forced organ harvesting.

The attackers were believed to have been organized by the Chinese Embassy. Chinese embassies around the world typically gather local Chinese residents to greet visiting Chinese officials while crowding out protesters.

In a related incident on Saturday, the Chinese vice military attaché in Argentina was taken away by police after physically threatening the Falun Dafa practitioners and resisting police.

Argentine practitioners gathered from early morning across the street with banners reading “Falun Dafa is good,” dressed in yellow shirts and jackets, and they informed passersby about the persecution of Falun Dafa in China. Many passersby expressed astonishment and indignation after hearing about the current persecution of millions of Falun Dafa practitioners in China for the past 15 years.

Taking Instructions
Around noon, ethnic Chinese began to appear, all residents of Argentina, many of them members of Chinese supermarket associations and other Chinese groups in Argentina, who are utilized to implement the Chinese Embassy’s instructions.

In countries worldwide, the military and intelligence envoys in embassies aim to make sure members of visiting Chinese delegations don’t see the words “Falun Dafa.” In the past in Argentina, they used force to snatch and destroy flags and banners held by Falun Gong practitioners.

One of the association leaders threatened, “If you don’t go, we will force you out.”” The situation was getting tenser as the time for Xi Jinping’s arrival at the hotel drew near. 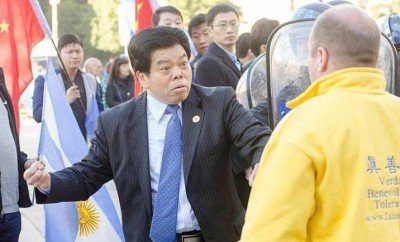 A Chinese gang punched and kicked while trying to take by force the banners reading “Falun Dafa is good,” which were displayed by a group of practitioners at one of the hotel entrances. The Argentine Federal Police intervened, pushing away the Chinese, but the Chinese kept returning.

Shortly afterward, minutes before the arrival of the Chinese leader, the situation repeated. With the imminent arrival of the motorcade, a gang of Chinese sent to oppose the peaceful protests tried to break the police cordon, ordered by one of its leaders, to attack the Argentine practitioners. The police held back the Chinese mob in order to safeguard the Falun Dafa practitioners’ right to protest.

Ultimately the Argentine Falun Dafa practitioners were able to hold up banners freely and peacefully while positioned in sight of the Chinese entourage that brought the Chinese leader Xi Jinping.

A similar scene took place later, when practitioners went to the La Casa Rosada, the executive mansion, where Xi Jinping had a scheduled visit with Argentine President Cristina Fernandez de Kirchner. Again gangs made up of local Chinese showed up, but the police, who accompanied the practitioners from the Sheraton Hotel, and by now could recognize the modus operandi of the Chinese assailants, intercepted them and kept them far away from the Argentine practitioners.

The entourage, including Xi Jinping, passed in front of where the practitioners were located. For the second time, the Chinese leader had the opportunity to see the banners of Argentine Falun Dafa practitioners.

Police Prepared
On the second day of peaceful protests related to the Chinese leader Xi Jinping’s visit to Argentina, local Falun Dafa practitioners were again attacked by a group of local Chinese waving flags of the People’s Republic of China.

On Saturday, a scene played out in front of Argentina’s National Congress similar to one the day before at the Sheraton Hotel.

But drawing from the experience o 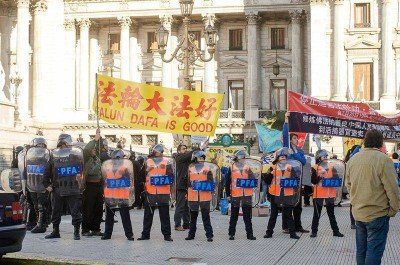 f the previous day, the Argentine Federal Police were better prepared to protect the Falun Dafa practitioners, cordoning off a safe area.

However, the gang thought to have been organized by the Chinese Embassy again attempted an attack. They pushed together to break the police cordon.

One of the attackers, identified as the vice military attaché of the Chinese Embassy in Argentina, started screaming slurs against Falun Gong and then openly attacked the practitioners, trying to break through the police cordon. The police restrained him and, after a struggle, took him into custody.

Another attacker was identified as the president of the CASRECH (Chamber of Supermarkets and Self-Service Restaurants Owned by Chinese Residents in Argentina)—an entity that organizes the bulk of Chinese supermarkets in the country—nearly hit an Argentine Falun Dafa practitioner who peacefully resisted the assault. A photo shows the attacker with his fist at the ready. The police eventually closed ranks and prevented the suppression of the peaceful demonstration.

Practitioners continued displaying their banners and signs and handing out informational materials to passersby. Despite the attempts by the Chinese agents to block the practitioners as Xi Jinping left the Congress, the Chinese leader encountered for the second day in a row the banners calling for an end to forced organ harvesting and the genocide against Falun Gong in China.

Falun Dafa or Falun Gong is a peaceful spiritual discipline based on the principles of truthfulness, compassion, and forbearance. In the ’90s, the practice became very popular in China. The popularity of Falun Gong—it had between 70 million and 100 million practitioners, a number greater than the number of members of the Chinese Communist Party—caused the communist regime to take notice. Beginning July 20, 1999, Jiang Zemin took authoritarian measures to suppress the traditional discipline.

Since then, Falun Gong practitioners in China have been imprisoned, tortured, sent to labor camps, and have even been victims of organ harvesting. Around the world, Falun Gong practitioners have been raising awareness about the persecution. When Chinese Communist Party officials visit other countries, it is common for them to encounter peaceful protests showing Falun Gong banners denouncing the violation of human rights and calling for an immediate end to the persecution.