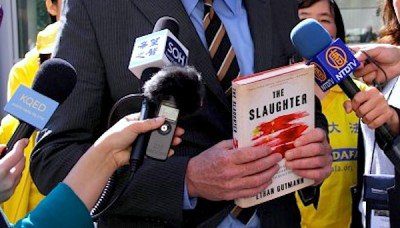 Days after the publication of a new book on state-run organ harvesting of prisoners of conscience in China, Chinese authorities have published a flurry of articles, statements, and claims—some of them contradictory—decrying organ trafficking rings, affirming the commitment to no longer using prisoners of conscience, and sternly noting the illegality of organ trading for profit.

It is unclear whether the bout of recent reports from China was a response to The Slaughter, written by American investigative journalist Ethan Gutmann, and published on Aug. 12, or whether the timing was mere coincidence. But Chinese official propaganda has exhibited similar patterns previously.

At a Aug. 16 hospital conference in Beijing, Huang Jiefu, the former vice minister for health and now the head of the China Organ Transplant Committee, managed to combine Party leader Xi Jinping’s theory of the “China dream” with hoped-for improvements in the Chinese organ transplant system.

He was paraphrased to say: “When the China dream is realized, there absolutely will not be people holding others captive to transplant their kidneys, doctors won’t do organ trading, and organs from the judicial system will not be the only source of organs. At that time, voluntary donors who die will be the only organ source.”

The day after Huang Jiefu’s remarks at the hospital conference, Wang Yu, the director of disease control at the health ministry, emphasized how China’s organ transplant system would severely punish those who illegally traded in organs.

Wang said that the computerized allocation system that was brought online last September is supposed to provide a “fair, transparent, and traceable” system for organ allocation. Little data from the system is available, however, and until recently some hospitals in China advertised organ tourism in flagrant violation of the laws on the books.

But confounding the matter, Huang also made other remarks recently which indicated the opposite. “Death row prisoners are also citizens, and if they wish to donate their organs after death, they should be accorded the same consideration,” he said in paraphrased remarks, which added that these organs should go into the same allocation system.

This confusion of two messages—prisoner organs should be phased out, but prisoners should be allowed to donate organs—echoes what he said in March of this year, in an interview with a Chinese newspaper, where he openly defended the practice of sourcing organs from executed prisoners.

“Judicial organs and local health ministries should establish ties, and allow death row prisoners to voluntarily donate organs and be added to the computer organ allocation system,” Huang said, in remarks that were paraphrased by the Beijing Morning Post and widely published on Chinese websites.

A Matter of Timing

Last month in China, members of a criminal ring in Jiangxi Province that kept people in captivity for transplants were sentenced to jail, and the news item attracted close attention in China. They were sentenced to prison in July, after operating for five months, holding 40 people in wait for extraction, performing 23 kidney removals, and obtaining profits of 1.5 million yuan ($240,000).

Both Huang and Wang made reference to the criminal ring, but their remarks come over a year after it was discovered, and nearly a month after the sentencing. Much of what they said about China’s organ transplant system has little to do with small-time criminal rings, which can deal in dozens of organs, but never the tens of thousands that military hospitals are understood to trade in.

Also in a similar statement to one made earlier this year, Huang Jiefu promised that any hospitals that did not join the allocation system, and join the voluntary donation system, would have their license to conduct organ transplants revoked.

Huang said that up to Aug. 14, a total of 2,107 individuals have voluntarily had organs extracted from their bodies after death, yielding a total of 5,787 organs.

These numbers should be compared to the years of 2006 and earlier, where Chinese state-run media regularly boasted of conducting 10,000 organ transplants a year—year after year—and there was no voluntary donation system at all.

When challenged on those numbers, Chinese officials admitted that executed prisoners were a large portion of their organ transplants.

But China does not execute 10,000 people a year. And many criminal prisoners in China’s system suffer poor health or liver diseases, making them non-viable organ transplantation candidates.

It is very difficult to get an accurate picture of precisely how many organ transplants China does. Radio Free Asia included in a recent article an anecdote from a Chinese health care company vice-chairwoman, identified only as Lin.

Lin is quoted saying: “I personally asked a liver transplant specialist surgeon about this. He told me he had performed 100 procedures in just three months at his hospital, which wasn’t even in a major city. If you extrapolate that to the 50-some transplant centers across the country, that adds up to 18,000 transplant operations carried out in the space of a year.”

If viable transplants from executed prisoners only number in a few thousand per year, and voluntary donations are far less than that—where does the remainder come from?

The recently published book, The Slaughter, provides a troubling answer: primarily, it says, transplants come from prisoners of conscience, mostly practitioners of Falun Gong, a spiritual practice that has been persecuted since 1999.

Among the evidence that Gutmann amasses to reach this conclusion are interviews with refugees who received organ-oriented medical tests, analysis of Chinese data and claims by officials, covertly recorded telephone calls to China, and testimony from a well-known Taiwanese surgeon, Dr. Ko Wen-je, who says that doctors in China boasted to him of how they would be able to supply organs from Falun Gong.

Given the sensitivity of Chinese officials to these activities being exposed, it is possible that Huang Jiefu and Wang Yu’s recent remarks were aimed at heading off any negative publicity about China’s transplant system that Gutmann’s book might have engendered.

There is cause to suspect a potential pattern, too. In 2012, not long after allegations emerged that a former chief of police of the southwestern city of Chongqing was responsible for thousands of organ transplants, most likely using Falun Gong prisoners of conscience as his organ source, Chinese health authorities made prominent claims about their intention to absolutely phase out donations from executed prisoners. They, of course, made no reference to either Wang Lijun or the source of his organs.