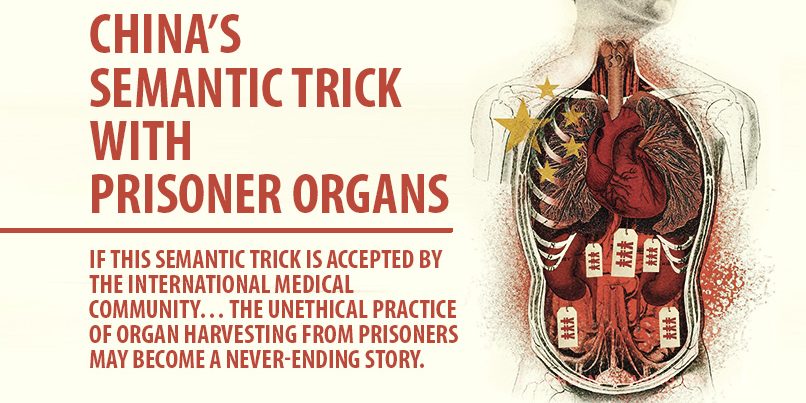 On 3 December 2014, the director of the China Organ Donation Committee and former vice-minister of health, Huang Jiefu, announced that China would cease using death-row prisoners’ organs for transplantation after January 2015. Since then, many medical professionals and international journalists have believed that China has stopped using executed prisoners as a source of organs. This, however, is a misjudgement of the situation in China. [1]

The term “death-row prisoners’ organs” to which Huang referred is different from the common definition of prisoner organs. The announcement by Huang refers to the intention to stop the use of organs illegally harvested without the consent of the prisoners. If “consent” is obtained, organ procurement from executed prisoners is legal according to current Chinese laws.

These prisoner organs procured with “consent” are now classified as voluntary donations from citizens. The re-defining of prisoners as regular citizens in this context is facilitated by the fact that there is currently no law in China that distinguishes prisoners from regular citizens for organ sourcing.

However the use of “voluntarily donated” prisoner organs in China continues to violate international ethical guidelines. It is a fundamental principle in transplant medicine that organ donations must be made voluntarily, which in turn requires autonomous, informed decision making. Even with “consent,” using organs from prisoners is not acceptable: prisoners are neither free from coercion nor always fully informed, nor able to freely consent, nor are their families. [2] The World Medical Association (WMA) states unmistakably in its policy that “in jurisdictions where the death penalty is practised, executed prisoners must not be considered as organ and/or tissue donors.”

Such organs are still being used for transplantation, but are no longer considered as prisoner organs in China:

• China Daily reported on 4 December 2014: “Prisoners are still among the qualified candidates for donations, but their organs will be registered in the computerised system instead of being used for private trades, which will be the main difference in the future, Huang told reporters.”

• On 4 March 2015, Beijing Youth Daily cited Zhuang Yiqiang (deputy general secretary of the Chinese Organ Transplantation Development Foundation): “Either death-row prisoners or ordinary people, all have the right to freely decide whether to donate organs or not. Death-row prisoners are also human beings. If he or she is willing to donate organs after death, of course, he or she should not be discriminated by society. But the prerequisite is, it must be out of one’s own will.”

Huang Jiefu has also developed a new way to treat these prisoner organs:

• Huang Jiefu’s interview with Phoenix Satellite Television on 11 January 2015: “I’m not saying I oppose donation from death-row prisoners. If the death-row prisoners are truly moved by their conscience, then it’s not impossible. But it must go through the citizen organ donation system, through the Red Cross, through the online computer system for a fair and equitable distribution. That’s transparent.”

All these statements collectively deliver a clear message: death-row prisoners are still allowed or perhaps even encouraged to “voluntarily” supply organs in China. These organs are now classified as voluntary donations from citizens.

Still, there is currently great confusion in the international community regarding this issue due to a lack of transparency in China. For example, at the European Parliament workshop on “organ harvesting in China” on 21 April 2015, the former president of the Transplant Society (TTS), Francis Delmonico, erroneously stated that “organ procurement from executed prisoners has been illegal since 1 January 2015, by the law of China.” Very recently, Jeremy R Chapman, editor-in-chief of the journal Transplantation, stated in a commentary in the July issue that “the use of organs from executed prisoners is now, by government mandate, illegal.” [3] These interpretations are in clear contrast to the aforementioned statements of Chinese transplant officials who in 2015 continue to openly defend prisoner organ “donation.”

On reporting the Guangzhou Forum, the Chinese media pointed out that “the long-awaited human organ donation law has not yet been introduced.” This confirms that the new law doesn’t exist. The announcement of December 2014 itself is neither a law nor a governmental regulation. It is only at best a statement of good intentions but has no force of law. The announcement is not even mentioned in the policies of the PRC National Health and Family Planning Commission, which administers the China Organ Transplant Response System (COTRS). And to underline the legal uncertainty, the 1984 Regulation that permits the use of executed prisoners’ organs has not been abolished.

After repeated past unfulfilled promises from China, such as the Chinese Medical Association letter to the WMA in 2007, and the failed Hangzhou Resolution in 2013, [4] announcements alone, without subsequent legal actions and without verification that those respective laws are implemented, should not be regarded as satisfactory by the medical community.

If this semantic trick (labelling prisoner organs as voluntary donations from citizens) is accepted by the international medical community, China would officially bypass international ethical guidelines, and the unethical practice of organ harvesting from prisoners may become a never-ending story.

Moreover, the new “standard” may foster the increase of forced organ harvesting from prisoners of conscience as well. Since 2006, mounting evidence suggests that prisoners of conscience are killed for their organs in China with the brutally persecuted Buddhist practice, Falun Gong, among others, being the primary target. [5,6] This issue has increasingly captured the attention of public media (e.g. BBC radio report and recent SBSand CBC television reports) and the political sphere (e.g. the European Parliament resolution “Organ harvesting in China” of 12 December 2013 and the like namedEuropean Parliament workshop on 21 April 2015). By re-defining prisoners as regular citizens for “voluntary” organ donation, China’s national organ procurement system may be abused to whitewash organ sourcing from both death-row prisoners and prisoners of conscience.

Therefore, by reason of international ethical standards and vulnerable populations at risk of abuse, the use of organs from any kind of prisoners must be prohibited by law in China. China must make its organ donation system transparent and verifiable to independent professional organizations and open to international inspections to gain credibility. Until then, sanctions should remain.