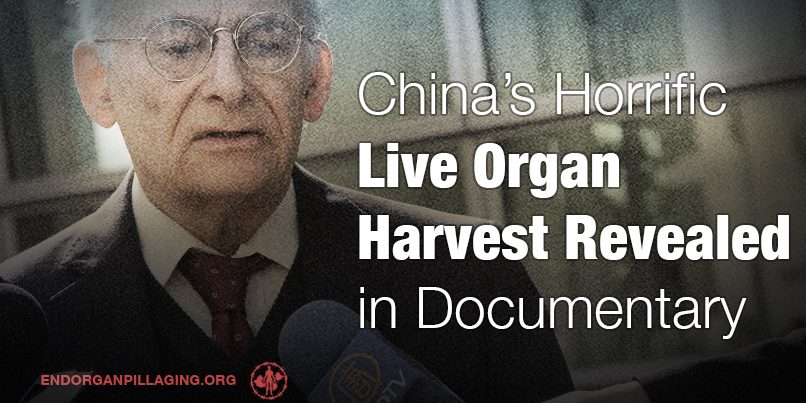 SYDNEY—A harrowing documentary on forced organ harvesting from live prisoners in China has highlighted concerns that the state sanctioned practice continues despite claims by Chinese health officials that it has been stopped.

The documentary, Human Harvest: China’s Organ Trafficking, screened on SBS’ Dateline last week, exposes an horrific system in China, where doctors, nurses and medical students, work in state-run civilian and military hospitals to remove organs and other body parts from political prisoners while they are still alive.

The abusive practice services an organ-on-demand transplant system, which has grown over a decade into a billion dollar organ transplant industry, says a group of statesmen, human rights lawyers, doctors and investigators featured in the documentary.

Although exact figures are hard to determine, official data suggests China does around 10,000 organ transplants a year, the second highest rate of transplants in the world behind the United States.

Individual hospitals boast extremely short waiting times, a fact investigators suggest is due to a massive prisoner population, drawn on like an organ bank to provide organs on request.

Chinese officials initially denied they were using prisoners on death row for organ transplants claiming they came from organ donations. A 2011 report from the International Red Cross however, found that over the previous 20 years, only 37 people nationwide had registered as organ donors in China.

There are 100 million registered organ donors in the United States and still many people in need of a transplant wait years for a suitable donor.

Chinese officials have since admitted organs of executed prisoners are used for transplants, but following international condemnation have made various announcements on how they will stop it.

Dr Huang Jiefu, the Chinese regime’s organ transplant czar, is on record condemning the unethical system and has pledged that China would end the controversial practice by Jan 1, 2015.

But Doctors Against Forced Organ Harvesting (DAFOH), a medical ethics advocacy group, which features prominently in the Canadian documentary, says without transparency and with continuing high numbers of transplants, it is hard to believe that anything has changed.

The normally quiet Huang, formerly the deputy health minister, continues to publicise the Party’s decision, announcing in March that the regime had turned a new leaf. He pointedly discouraged reporters from digging into the recent past.

DAFOH, however, was quick to respond, demanding again proof of their claims. The organisation urges extreme caution about the content of the new promises, and calls for transparency about the extent of organ harvesting that has already taken place.

In a press release on April 7, it said that the international community “should not find relief” in the new pledges, given that Chinese authorities have a “lengthy record of secrecy, misleading numbers and contradictory statements.”

The confusing nature of official policy was on full display in some of Huang’s own remarks. On March 13, for example, he repudiated the closest thing China has had to a legal justification for the use of prisoners organs: a secret 1984 regulation under the aegis of the Supreme People’s Court, the Procuratorate, and public security bureau, and three other agencies.

Use of dead bodies or organs from condemned criminals must be kept strictly confidential.

The regulations state that hospitals may use the organs from prisoners as long as family members agree, but that “use of dead bodies or organs from condemned criminals must be kept strictly confidential.”

Huang’s repudiation of these regulations means that “tens of thousands of organ procurements” made since the regulation was enacted are thus illegal and unethical, and the medical staff responsible for those transplants should be prosecuted.

Huang seems aware of the difficulties of the official stance. On March 16 he called the harvesting of prisoners’ organs a “filthy, intractable, sensitive and forbidden area” before hinting strongly that purged Chinese security chief Zhou Yongkang was behind the operations. In this, he effectively backtracked on earlier comments he made to the Australian Broadcasting Corporation and state-run China Daily, where he claimed that the use of organs from executed criminals was ethical by Chinese standards—and even the right thing to do.

As evidence that the new policy of “sunshine and transparency,” in Huang’s words, is highly questionable, DAFOH points to Chinese hospitals that have recently begun scrubbing their websites of incriminating transplant numbers, and in some cases revising downward—by 50 percent—the number of transplants they did two years previously.

“It is evident that China is not ready to join the ethical value-based transplant community as an equal, trusted partner,” DAFOH said. The doctors said that other international and medical watchdog groups should demand greater transparency from the Chinese regime on the issue of organ transplantation.

Instead, DAFOH said that China needs to provide “full disclosure of the use of prisoners of conscience as organ source,” and full transparency and access to the country’s organ procurement system. The first injunction seems unlikely to be fulfilled, judging by Huang Jiefu’s remarks in March.

“We shouldn’t always dwell in the past, always concerned about the page of death row inmates,” he said. “Flip over the page and look at the future. … There is nothing interesting to pay attention to in this. We should pay attention to the future, not the past.”

Researchers, meanwhile, estimate that tens of thousands of prisoners of conscience, the vast majority practitioners of Falun Gong, a spiritual discipline that has been persecuted since 1999, have been executed for their organs. In many cases they are thought to have had their organs removed while they were still alive, and died from the procedure itself.

The Canadian documentary broadcasts doctors, recorded secretly in phone conversations, who admit that they can provide organs from Falun Gong practitioners. The organs are desirable due to the practitioners’ recognised healthy lifestyles.

And in an emotional scene, a Chinese doctor describes his first encounter with live organ harvesting as a medical student.

When I cut through [the body] blood was still running … this person was not dead.

“When I cut through [the body] blood was still running … this person was not dead,” he said.

“I took the liver and two kidneys. It took me 30 minutes.”

Human organs, particularly the liver, are known to deteriorate the longer they are removed from the body.

Canadian researchers, David Matas and David Kilgour, a respected human rights lawyer and a former member of the Canadian parliament respectively, estimate that between 2000 and 2008 alone, over 60,000 Falun Gong adherents have likely been killed through organ harvesting.

Further investigations by journalist Ethan Gutman suggest political prisoners and other prisoners of conscience are also being used for organ harvesting, including House Christians, Tibetans and Uyghurs.