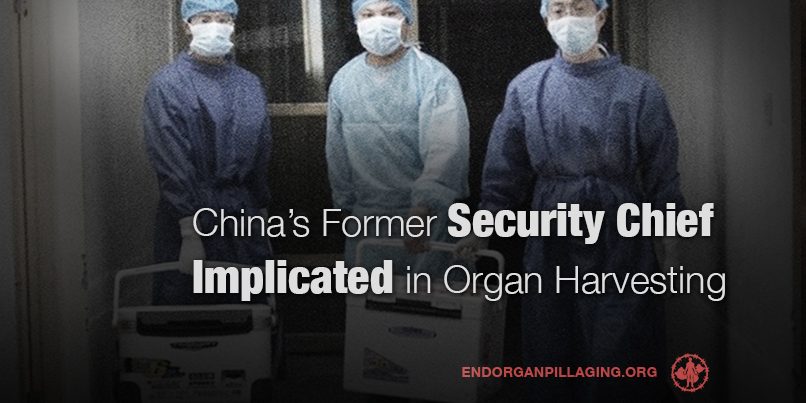 In a shocking shift in a public narrative, China’s top organ transplantation official blamed the former chief security boss and longtime Jiang Zemin loyalist, Zhou Yongkang, for the state’s use of prisoners as a live organ bank.

The remarks from Huang Jiefu, China’s organ transplantation chief, helped to corroborate a crime that no Party official has yet admitted: the use, not just of death-row prisoners, but prisoners of conscience, as a massive live organ bank.

Zhou Yongkang was recently arrested as part of Communist Party head Xi Jinping’s continuing anti-corruption campaign—a campaign that has been a not-so-veiled attempt by Xi to root out and arrest all loyalists of former leader Jiang Zemin. Those arrested, including Zhou, represent those in the regime most responsible for carrying out Jiang’s persecution of Falun Gong.

Researchers identify practitioners of the Falun Gong spiritual discipline as the primary targets of organ harvesting, beginning in 2000 and continuing to this day.

Tens of thousands of Falun Gong adherents have been executed for their organs, researchers say—or more gruesomely, had their organs removed while they were still alive, so they would be fresher.

Huang Jiefu, the transplant chief and a former vice minister of health, was giving an expansive interview with the Hong Kong-based, Beijing-friendly broadcaster Phoenix Television when he made the remarks.

In his narrative of the heroic struggles of himself and colleagues to reform China’s abusive organ transplantation system, Huang said, “When we decided to stop the reliance on executed prisoners for organ transplants” it was “the most helpless period we’ve been in.”

“Using prisoner organs, this kind of situation naturally would come to have all kinds of murky and difficult problems in it. Do you know the meaning of my words?” he said, cryptically, to the young female reporter.

Using prisoner organs, this kind of situation naturally would come to have all kinds of murky and difficult problems in it.

“It became filthy, it became murky and intractable, it became an extremely sensitive, extremely complicated area, basically a forbidden area,” he continued.

This was all due to the baleful influence of security boss Zhou, as Huang would have it. But the new leadership, with its stern anti-corruption campaign, supported him and his colleagues, and they were able to pull off the reforms, he said.

When asked which “big tiger,” or powerful official, was the greatest obstacle, Huang responded quickly: “It’s just too clear. Everyone knows the big tiger. Zhou Yongkang is the big tiger; Zhou was our politics and law secretary, originally a member of the Politburo Standing Committee. Everyone knows this. … So as for where executed prisoner organs come from, isn’t it very clear?”

Huang has claimed China is in the middle—or so it seems—of attempting to reform its reliance on prisoners for its organ transplantation needs. Whether such reforms are actually underway is a matter of debate among experts.

There is no doubt that Zhou, as head of the pervasive security apparatus, would have had a role, and perhaps a key role, in the use of Falun Gong adherents for organs.

But in attempting to tidy up loose ends, it is officials like the formerly powerful security chief, Zhou, who are said to be solely to blame. Zhou, indeed, presided over a much-feared and sweeping apparatus of surveillance and violence, and it was partly under his watch that saw the abuse of prisoners for organs.

There was also Gen. Xu Caihou, a deposed top military official who was also recently fingered for overseeing the abuses of organ transplantation in the military. Xu allowed officials to pioneer the semi-dead form of extraction, where prisoners are not actually killed before their vital organs are removed. Such organs are much better for transplant, because every minute that new blood is not flushing through an organ degrades its quality.

Incidentally, Xu Caihou’s outing on Hong Kong television as being responsible for organ harvesting—by a well-known former military surgeon still in Beijing—preceded the announcement of his death by just days. And the timing of his death itself raised eyebrows, coming precisely one year, to the day, after he was arrested on charges of bribery.

Both officials were stalwarts of Jiang Zemin, the former Party head who initiated the persecution of Falun Gong and, according to one rights advocacy group, ordered the harvesting of adherents.

Xi Jinping, the Communist Party head since late 2012, has spent much of his energy over the last two years purging the Party apparatus of the influence of Jiang and his cohort—including the likes of Zhou and Xu Caihou.

It is unclear whether the recent statements about Zhou and Xu’s involvement in organ harvesting are part of this campaign, or are meant to ensure that the Party itself is not held responsible for the mass murder of religious adherents, should the full story surrounding that campaign come to light in the future.

Huang’s comments do “show how politicized Huang Jiefu is,” said David Matas, a co-author of a report on the harvesting of Falun Gong. “He says what he thinks he can in the current political context. He’s not giving us facts, but what the political situation allows.”

His colleague David Kilgour who co-wrote the report, “Bloody Harvest,” said that Huang was a consummate liar and could not be trusted except to parrot the Party line on a given day: “Huang Jiefu has never admitted that organs come from Falun Gong. He says they’re just prisoners. He’s been lying about this constantly, pretending that Falun Gong victims are not the source of organs,” Kilgour said.

There is no doubt that Zhou, as head of the pervasive security apparatus, would have had a role, and perhaps a key role, in the use of Falun Gong adherents for organs. But if the harvesting began in 2000, as the evidence indicates, this was before Zhou’s tenure as security boss.

Another confusing element of the recent admissions is their overall intent: Huang Jiefu claims again to be helping to construct a system that never uses organs from prisoners of any kind. Only citizens who voluntarily donate organs will be included in the official, computerized distribution system, which is supposed to ensure that those who most need a transplant will get one, he said.

However, only months ago Huang redefined, in multiple interviews, the definition of a voluntary citizen donation, effectively reclassifying prisoners as “citizens” who had the right to donate their organs. “I’m not saying we’re against death row donations. … If a death row prisoner truly finds their conscience then that won’t necessarily be precluded,” Huang said in an interview with Phoenix Television.

China Daily, the official English-language publication of the Chinese regime, in December last year also made clear that “prisoners are still among the qualified candidates for donations,” citing Huang Jiefu.

This word game—the reclassification of prisoners as citizens, where citizens are allowed to donate—seems to be still at play.

Ethan Gutmann, who has authored a book on the organ harvesting of Falun Gong, compared the recent moves to the kind of make believe seen under Joseph Stalin. “For the internal Party, for the doctors who need to know, Huang Jiefu gives an interview that isn’t likely to be picked up abroad, and he says: Don’t worry. Prisoners are going to do voluntary donations now,” Gutmann wrote in an email.

Gutmann continued: “And then, for the sake of Western perceptions, Huang Jiefu says no prisoners are being harvested at all. But it’s too rushed. It’s not even that good of a lie—it’s almost disrespectful. Only those in the West who really want to be deceived would accept such an obvious bait and switch.”