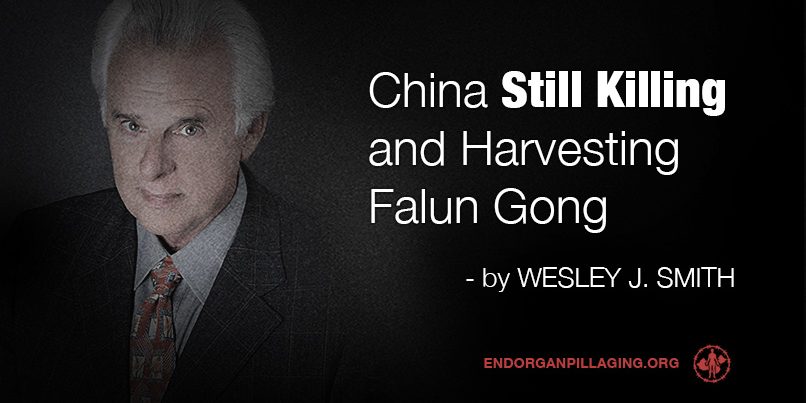 China is a brutal tyranny in which all manner of oppressions are imposed by the government–such as its authoritarian one-child policy–recently praised by VP Joe Biden with faint damnation, while being outright praised by others.

More, some of the willingly complicit in the tyranny, such as killing political prisoners and selling their organs. One such participant is kidney buyer Daniel Asa Rose, author of Larry’s Kidney, who audaciously wrote a gleeful books about his experience in the organ market. (I hope he enjoyed the blood royalties.)

Killing and harvesting prisoners is a particularly heinous practice against which the splendid former Canadian MP David Kilgour has fought for many years. China had promised reform, but–surprise, surprise–Falun Gong (and Christians) are still arrested, typed, slaughtered, and harvested.

First, Kilgour references his earlier work. From his report presented to a European Parliament workshop on the issue:

Permit me to mention only a small fraction of the evidence that led us to our conclusion:

• Investigators made many calls to hospitals, detention centres and other facilities across China claiming to be relatives of patients needing transplants and asking if they had organs of Falun Gong for sale. We obtained on tape and then transcribed and translated admissions that a number of facilities trafficking in the Falun Gong organs provided.

• Falun Gong prisoners, who later got out of China, testified that they were systematically blood-tested and organ-examined while in forced-labour camps across the country. This could not have been for their health since they were regularly tortured, but it is necessary for organ transplants and for building a bank of live “donors”.

• In a few cases, family members of Falun Gong practitioners were able to see mutilated corpses of their loved ones between death and cremation. Organs had been removed.

• We interviewed the ex-wife of a surgeon from Sujiatun in Shenyang City, Liaoning. The surgeon told her that he had removed corneas from 2,000 Falun Gong prisoners between 2001 and 2003. He made it clear to her that none of these sources survived because different surgeons removed other organs and their bodies were then burned.

I have written about Kilgour’s work before. But I wasn’t aware of this later work referenced in his report:

The seminal 2014 book, The Slaughter (Prometheus), by Ethan Gutmann places the persecution of the Falun Gong, Tibetan, Uyghur, and House Christian communities in context. It focuses mostly on Falun Gong, the group most viciously and continuously targeted since 1999.

Gutmann explains how he arrives at his “best estimate” that organs of 65,000 Falun Gong and “two to four thousand” Uyghurs, Tibetans and House Christians were “harvested” in the 2000-2008 period alone. No “donors” survive pillaging because all vital organs are removed to be trafficked for high prices to wealthy Chinese nationals and “organ tourists”.

This is shocking and intolerable. So is the dearth of effective international response.